Video of illegal gold mining operations that have turned a portion of the Amazon rainforest into a moonscape went viral on Youtube after a popular radio and TV journalist in Peru highlighted the story.

Last week Peruvian journalist and politician Güido Lombardi directed his audience to video shot from a wingcam aboard the Carnegie Airborne Observatory (CAO), an airplane used by researchers to conduct advanced monitoring and analysis of Peru’s forests. The video quickly received more than 60,000 views on Youtube.

The attention generated by the broadcast is significant because the issue of gold mining in the Peruvian Amazon isn’t well known, despite its widening impact.

According to Greg Asner, the Carnegie Department of Global Ecology scientist who led the development of the CAO, more than 50,000 hectares have been affected by gold mining in just the southern part of the department of Madre do Dios. A soon-to-be-published paper, co-authored with members of Asner’s team as well as Peruvian researchers, will show that the rate of expansion has nearly tripled in recent years, climbing from 2,166 hectares per year prior to 2008 to 6,145 thereafter.

While the numbers may seem abstract, seen from above, the extent and totality of the devastation is astonishing. Vast areas of wildlife-rich rainforests have been annihilated, while normally clear-flowing streams have been converted to muddy cesspools. Streams draining mining areas run blood-red and carry toxins and heavy metals like mercury to downstream towns and villages. Virtually all this mining is illegal. 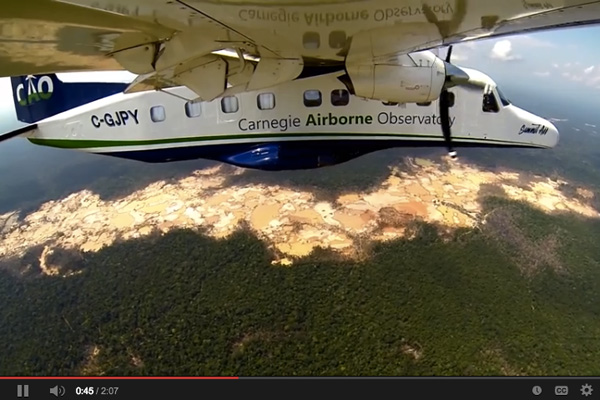 Given the growing damage — including social problems like violent conflict, crime, poor labor conditions, human trafficking and prostitution — getting a handle on the activity is a priority for Peru’s Ministry of Environment. The agency, better known as MINAM, has partnered with Asner’s team to track mining in near real-time.

“CAO’s sensors provide detailed information on patterns of degradation that are specific to gold mining; practically in real time,” Ernesto Raez, a senior official at MINAM, told mongabay.com. “We are very interested in the ability of the technology onboard CAO to detect illegal gold mining in the eastern foothills of the Andes (where it is much less visible and easier to hide) and to detect chemical traces of gold mining in the waters, particularly the presence of heavy metals.”

“The dimension of illegal mining in the Titicaca basin, particularly at the sources of the Ramis river, is even more shocking than in the jungle (if possible), with massive destruction of precious highland wetlands with heavy machines. These are giant operations. Arsenic has been found in the Titicaca Lake.”

The Peruvian government doesn’t yet have an estimate for the total extent of gold mines across the country, but Raez estimates that informal mining may involve 150,000 people across the country, suggesting it is well entrenched and therefore potentially very difficult to address.

Asner says whatever the utimate number, it is clear that gold mining is much more pervasive than previously estimated.

“These numbers are much higher than previous reports, and we have fully validated them by combining CLASlite [Asner’s satellite-based deforestation and forest degradation tracking system that is currently being used extensively by MINAM], CAO and clandestine fields surveys,” Asner told mongabay.com. “Working on this problem with Ernesto and the rest of MINAM is a top priority for the CAO team.”