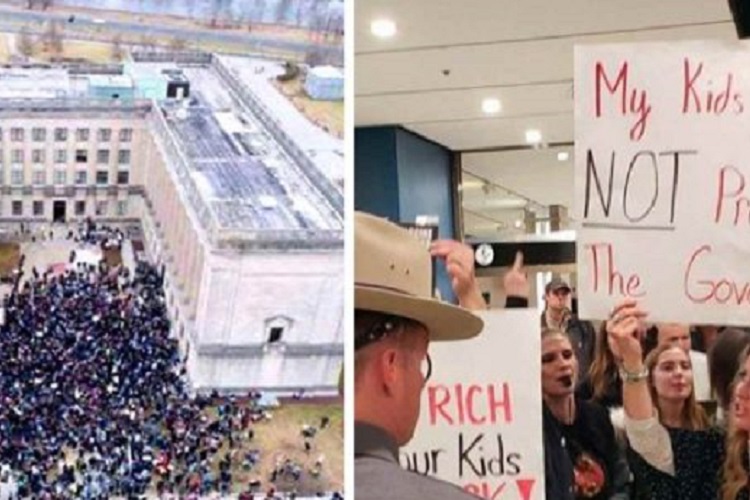 A bill in New Jersey that would’ve stripped parents and children of their right to informed consent by allowing them to object to mandatory vaccinations failed on Monday. Much to the chagrin of the tyrants who claim ownership over the bodies of others, the bill that would have eliminated religious exemptions to mandatory vaccinations failed to pass the New Jersey state legislature.

According to reports, the bill was canceled in the Senate before the vote because lawmakers knew they lacked the passing votes. The proponents of the bill vowed to reintroduce it on Tuesday but this gives opponents a new time frame on the public hearing and voting process.

Sources at the Statehouse say Democrats are looking for one final vote to pass the vaccine bill in the Senate.

Asked about it passing today, @NJSenatePres told me: “I don’t know yet.”

The victory for medical freedom was an emotional and dramatic one as thousands of pro-freedom protesters showed up at the Statehouse to voice their concern over the government removing their right to informed consent. Naturally, those who want to remove your freedom of choice and sovereignty over your own body and force you to take an injection even if it goes against everything you believe in, were furious. They even vowed “war.”

“We’re ready to go to war over this,” Senate President Stephen Sweeney (D), told reporters Monday, according to NJ.com. “We will pass this bill. This is about public health. It’s about protecting people.”

Others, who don’t agree with the government forcing people to undergo medical procedures against their will, disagreed.

Sue Collins, co-founder of the New Jersey Coalition for Vaccination Choice, told NJ.com this was “a victory for both religious and medical freedoms” in the state.

“There is a lot of work to be done now to formulate legislation that will truly improve public health,” Collins said. “This bill would not have achieved that and would have stripped fundamental rights.”

The battle over this bill began last year when the United States saw a rise in measles cases across the country. While New Jersey saw just 19 cases, ground zero was just to the north of them. More than 70 percent of the 1,282 cases in the nation occurred, according to the U.S. Centers for Disease Control and Prevention in Rockland County, NY and New York City. In 61 of these cases, patients were hospitalized with complications, including pneumonia and encephalitis, the CDC said. There were zero deaths.

Since the beginning of 2019, the Free Thought Project has been reporting on the hysteria associated with the measles outbreak and the subsequent loss of liberties and police state crackdown that’s ensued. We’ve seen children banned from public spaces, mandatory vaccinations enforced with police action, and a pro-vaccine push in the mainstream media like we’ve never seen before. In May, the pro-mandatory vaccine push reached a new level, as the Washington Post published an article calling for the arrest of those who choose not to vaccinate. In August, we reported on the inevitable result of said hysteria and it came in the form of massive pharmaceutical industry profits and a loss of freedom.

The pharmaceutical giant Merck said consumer demand for its measles vaccine skyrocketed thanks to the “outbreak” which helped boost sales in its second quarter. Merck Chief Commercial Officer Frank Clyburn even mentioned the coverage in the news specifically.

“There was some buying to the private sector within the U.S. this quarter based on some of the measles outbreaks that you read in the news,” Clyburn said in a post-earnings conference call with investors. “And we do believe that we’ll continue to see growth for our pediatric vaccines going forward.”

The failure of this bill in New Jersey is a massive win in a time when there are very few wins for medical freedom.

To reiterate once more, no one here is advocating “antivaxxer” information. TFTP is simply questioning the policy of the government forcing medical procedures on citizens without their consent and advocating for fines and arrests of those who refuse. If you truly value freedom, you should also stand against forcing someone to inject something into their body that they do not want. The only other option is tyranny.