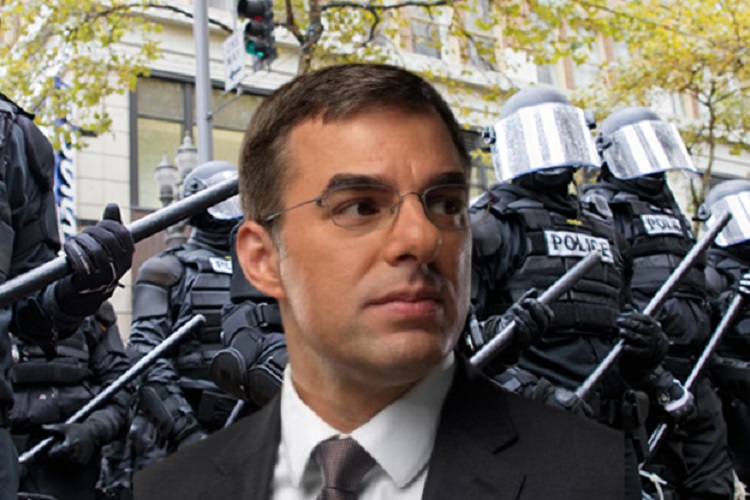 In response to the massive protests that have developed around the United States in recent weeks, US lawmakers are now pushing for monumental police reforms that seek to limit legal protections for violent cops, and strip police departments of their military equipment. The measures are being introduced or supported by both Republican and Democratic lawmakers.

US Representative Justin Amash, a long-time conservative who has been a vocal critic of Trump and a friend of the Libertarian party has gained bipartisan support for his “Ending Qualified Immunity Act,” which hopes to hold police accountable for the crimes they commit on duty and would finally allow for civil lawsuits against police.

“The brutal killing of George Floyd is merely the latest in a long line of incidents of egregious police misconduct. This pattern continues because police are legally, politically and culturally insulated … That must change so that these incidents stop happening,” Amash said in a letter to congress, according to the NY Times.

As National Guard and SWAT teams have been deployed to protests throughout the country, Senator and former presidential candidate Cory Booker introduced a list of sweeping reforms to police departments nationwide, which would include stripping them of their military weapons and gear.

Booker’s bill would also push for an end to qualified immunity for police, and the creation of a national police misconduct registry, and a ban on the use of chokeholds for police.

“Cities are literally on fire with the pain and anguish wrought by the violence visited upon black and brown bodies. There’s no one singular policy change that will fix this issue tomorrow. We need an entire set of holistic reforms to improve police training and practices, and ensure greater accountability and transparency,” Booker said.

Despite Donald Trump’s harsh words for the protesters, his usually supportive Republican cohorts have been open to discussing police reform. Even Senator Mitch McConnell called the death of George Floyd unacceptable and recognized the anger that people are feeling was legitimate.

“In no world whatsoever should arresting a man for an alleged minor infraction involve a police officer putting his knee on the man’s neck for nine minutes while he cries out ‘I can’t breathe’ and then goes silent. Our nation cannot deafen itself to the anger, the pain and the frustration of black Americans. Our nation needs to hear this,” McConnell said.

Similar legislation is being proposed by numerous other lawmakers, including Democratic Senator Brian Schatz of Hawaii, who said that police having military gear only serves to further escalate tensions between the police and the people.

“It is clear that many police departments are being outfitted as if they are going to war, and it is not working in terms of maintaining the peace,” Schatz said.

Representative Ruben Gallego, a former Marine, agreed that military weapons are not needed to police communities in the United States.

“As a combat veteran and proud Marine, very little of my equipment or training was relevant to policing Phoenix or other American communities. Our neighborhoods aren’t war zones,” Gallego said.