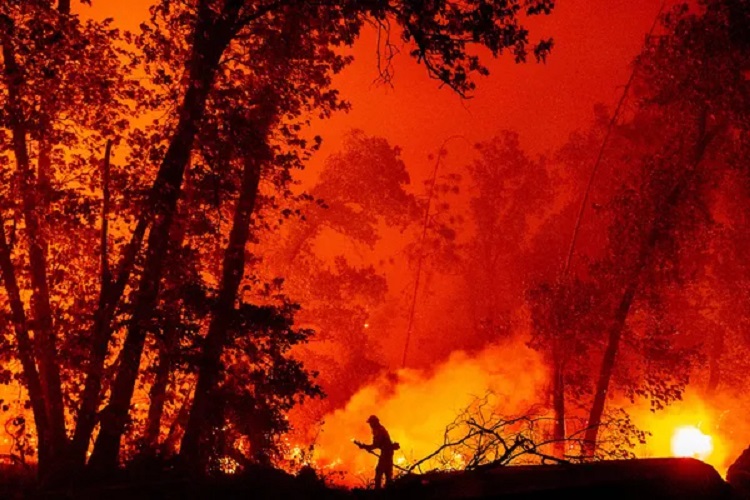 Wildfires raged through Oregon and Washington Monday and Tuesday, prompting evacuations, blanketing Seattle in unhealthy levels of smoke and destroying nearly all of a small Washington farming town.

The town of Malden in eastern Washington lost 80 percent of its structures including its fire station, post office, City Hall and library after a fast-moving blaze roared through on Monday, NPR reported.

“The scale of this disaster really can’t be expressed in words,” Whitman County Sheriff Brett Myers said in a statement reported by NPR. “The fire will be extinguished, but a community has been changed for a lifetime. I just hope we don’t find the fire took more than homes and buildings. I pray everyone got out in time.”

Per @PalouseNews these photos show the near total destruction of Malden, Wa. hit by an unbelievably fast wildfire just hours ago. #WAWildfires pic.twitter.com/0yZp4M2sdn

As of early Tuesday, there were no reports of injuries from the fire.

In the rest of Washington state, fires consumed more than 330,000 acres in a 24-hour period, fueled by strong winds and dry vegetation, NBC News reported.

“More acres burned yesterday than in 12 of the last entire fire seasons in the state of Washington,” Washington Gov. Jay Inslee said in a Tuesday press conference, as NBC News reported.

That’s more than 12 of the last 18 entire fire seasons.

In a single day. pic.twitter.com/Op7UEfhTNA

The two largest fires burning in the state are the 174,000-acre Pearl Hill Fire, in Douglas County, and the 163,000-acre Cold Springs Fire near Omak. Neither was contained at all as of Tuesday’s press conference. The Babbs-Malden Fire, the blaze that destroyed Malden, had spread to 8,943 acres and was also not contained.

West of the cascades, a fire burned through Graham, Washington Monday, destroying six homes and forcing around 100 people to evacuate, The Seattle Times reported.

“You didn’t have time to pack clothes, it was like, get out, now,” 55-year-old construction worker Tim VanBrocklin told The Seattle Times. “It was pretty nasty here, embers flying around our faces.”

A drone shot capturing the destruction and devastation after a brush fire exploded overnight in #Graham. Firefighters from around the Puget Sound are working to contain the fire. pic.twitter.com/lCgmyKD3DK

The wind that drove the fires also carried their smoke into the Seattle area Monday night and Tuesday morning.

Puget Sound Clean Air Agency scientists predict that air quality in the area will remain at “unhealthy” or “unhealthy for sensitive groups” levels through Wednesday and possibly into Thursday as easterly winds continue to blow.

Smoke arrives. #wawx A short animation of satellite images late this afternoon (as downloaded from the excellent CIRA website–the Cooperative Institute for Research in the Atmosphere, in partnership with NOAA and Colorado State University). pic.twitter.com/2EmPJm5uaZ

One of those people was Jody Evans of Detroit, Oregon.

“Fire on both sides, winds blowing, ash flying — it was like driving through hell,” Evans told NewsChannel 21. “Did you lose everything, or is the only thing you saved yourself?”

There were 35 active fires burning more than 367,279 acres in the state, ABC News reported early Wednesday morning. The fires prompted Oregon Gov. Kate Brown to issue an emergency conflagration declaration. This frees up state resources to battle blazes too big for local crews to handle on their own, USA TODAY explained.

“This is proving to be an unprecedented and significant fire event for our state, and frankly for the entire West Coast,” Brown said, as USA TODAY reported.

Listen up: We're in an unprecedented fire event. Several significant, growing fires across the state continue to spread due to hot, dry weather & high winds. Oregonians' lives are at risk. Follow evacuation orders, try to reduce your smoke exposure – and take care of each other. pic.twitter.com/t4ZZ7qIViX

The climate crisis has increased fire risk in the Pacific Northwest.

“We can’t attribute single fire events to climate change. But the trends in large fire events that have been occurring in the region are consistent with expected trends in a warming climate,” University of Washington School of Environmental and Forest Sciences assistant professor Brian Harvey said in April.

Fires are encouraged by wetter winters that swell vegetation growth and drier summers that dry it out, creating more fuel, Washington state climatologist Nick Bond told The Seattle Times. This weather pattern is expected to increase as the climate warms.

Inslee, who ran for president with a campaign centered on climate action, acknowledged these changes.

“This is an unprecedented and heartbreaking event … We’re living in a new world. This is not the old Washington,” Inslee said Tuesday, as The Seattle Times reported. “A fire that you might’ve seen that was going to be OK over time isn’t OK anymore because the conditions are so dry, they’re so hot, they’re so windy — because the climate has changed.”