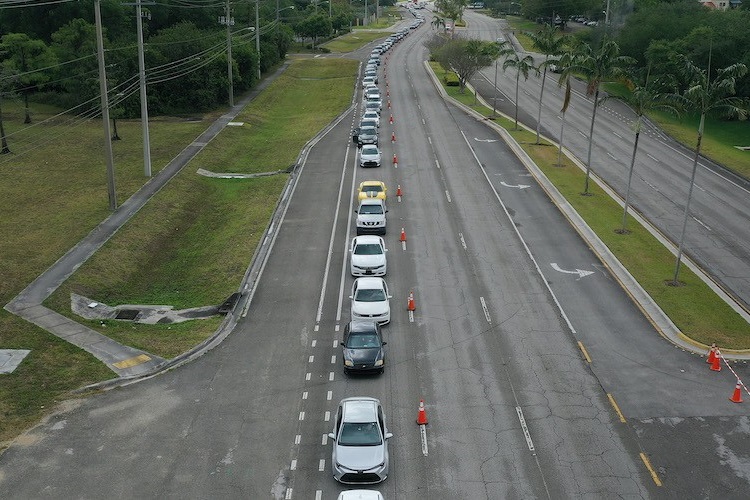 Images and video of miles of cars lined up at food banks in San Antonio and other cities across the U.S. present a striking example of the economic effects of the ongoing coronavirus outbreak, which has thrown at least 16 million Americans out of work in recent weeks and increased pressure on the distribution centers to provide key staples for a flood of needy people in the country.

This is what I saw. Blistering heat. Folks in line since 7pm the night before. To get food. Hundreds of volunteers busting it to serve, so families could go home (probably to pass some out to their neighbors too) & get the nourishment they need.

This is the COVID-19 Crisis. pic.twitter.com/CL8Be0wNwI

“It was a rough one today,” San Antonio Food Bank president and CEO Eric Cooper told the San Antonio Express News. “We have never executed on as large of a demand as we are now.”

The onset of the coronavirus outbreak brought with it economic paralysis across the U.S. and the world, shutting down businesses around the world as people use social distancing and isolation to curb the spread of the disease. In the U.S., where lawmakers have largely dragged their feet on providing unemployed people with help, Americans are increasingly turning to charities like food banks to provide the means of survival.

Se. Bernie Sanders (I-Vt.), an outspoken advocate for economic relief efforts, tweeted on Friday that the scenes from food banks were indicative of the need for immediate Congressional action.

“It is outrageous that in the richest country in the history of the world, people are going hungry,” said Sanders.

It is outrageous that in the richest country in the history of the world, people are going hungry. Congress must radically increase food assistance programs and offer grocery delivery options to ensure all people are able to eat safely during this crisis. https://t.co/zkvsGFdHOA

According to the New York Times, food banks across the country are facing funding shortfalls in the face of increasing demand despite donations from the superrich:

Feeding America, the nation’s largest network of food banks, with more than 200 affiliates, has projected a $1.4 billion shortfall in the next six months alone. Last week, Jeff Bezos, the founder of Amazon, announced that he was donating $100 million to the group—the largest single donation in its history, but still less than a tenth of what it needs.

In January 2019, Business Insider calculated Bezos makes roughly $4,474,885 every hour, making his donation to Feeding America the equivalent of around 22-and-a-half hours of passive wealth generation.

San Antonio was not the only city to see record numbers of people seeking help and miles of cars waiting for food. Pittsburgh, Inglewood, Chicago, and Sunrise, Florida were among cities with packed roads leading to local facilities and massive amounts of food to be distributed.

This report from Pittsburgh shows the miles-long line to get to the local food bank.

Watch. Share. Donate to your local food bank if you can. #DemCast
pic.twitter.com/ZK9CWLeHqN

A drone captured aerial images of the long line of cars in Sunrise, Florida, where motorists hoped to receive food from Feeding South Florida, a local food bank. https://t.co/cSiOZKd6qD

This morning, in the pouring rain, our office joined @BenHueso & @NoraVargasSD – and the @SDFoodBank in helping distribute 30lb food boxes to 1000 South Bay families! The need is heartbreaking, but the Food Bank is doing an incredible job! pic.twitter.com/ppkHaFtOVs

The United Center is helping with food storage for a local food bank in Chicago. MORE @ https://t.co/UMPaB9UZ9d pic.twitter.com/C1UkTO1syg

Feeding South Florida executive vice president Sari Vatske noted in an interview with the Daily Mail that with stay-at-home orders in her state curtailing the available workforce to handle an unprecedented surge in those needing aid, there may be trouble ahead in how to efficiently distribute the food.

“The math is not on our side,” said Vatske.