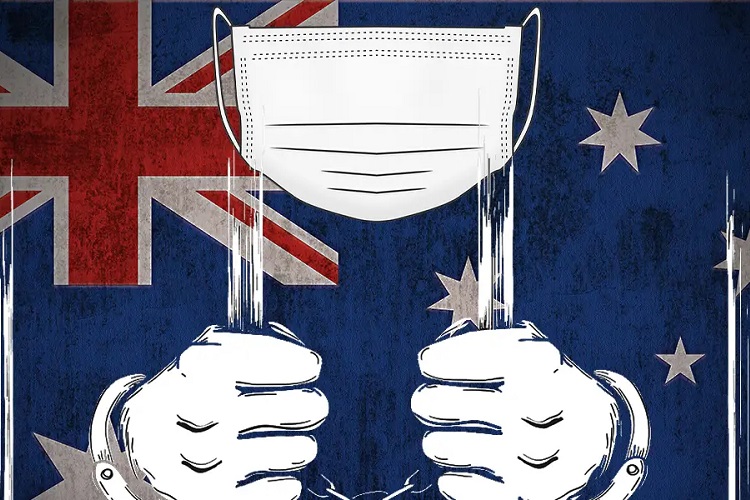 Earlier this week we reported that a pregnant woman from Melbourne, Australia, was arrested in her home for creating a social media page for an anti-lockdown protest. According to a new report from ABC news, three other Australians have also been arrested for making anti-lockdown posts online.

On Friday morning, a man named James Bartolo was also arrested in his home, and his arrest was recorded as well.

In the video, which was live-streamed through his Facebook page, Bartolo can be seen arguing with police who were gathered outside of his door, insisting that they did not have permission to enter his property.

“You don’t have authorization to be on the property,” he said.

Eventually, police busted through the door and made the arrest anyway. Since he did not go with the police willingly they stacked up additional charges against him, including resisting arrest and possession of prohibited weapons that were found in his home.

Bartolo is reportedly the fourth Australian the be arrested for incitement related to anti-lockdown posting online. After his arrest, Bartolo posted followup videos urging his friends and supporters to stay away from the upcoming protests in Melbourne on Sunday, calling the protests a “trap.”

He also suggested that large crowds at the protest could be used as an excuse to extend the lock-down measures. The region of Victoria is currently under level 4 restrictions, which includes a curfew and a limit on how far people can travel from their homes. As of now, there is no clear date for when the lockdown restrictions will be lifted in the region.

The crackdown and string of arrests were criticized by the Australian Human Rights Commission who posted a statement on Twitter regarding 28-year-old Zoe Buhler, the woman who was arrested in front of her children for organizing a protest on Facebook.