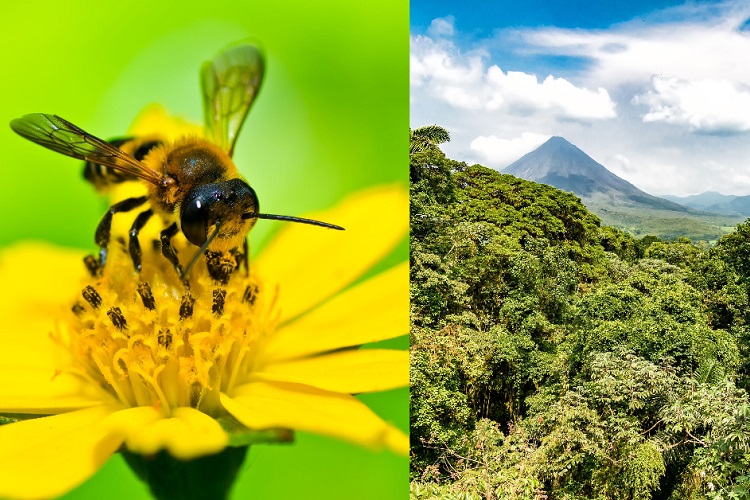 Curridabat, a suburb nestled in the Costa Rican capital, San José, is also known as Sweet City due to a pioneering vision in which trees, plants and pollinators such as bees, are given citizen status.

A small town on the outskirts of San José, Curridabat has around 75,000 inhabitants. Its benefited from political stability, thanks to the same local, neighborhood-based party maintaining power in the mayor’s office for 16 years.

And this has meant that they’ve been able to give special attention to the local ecosystem – and to base urban planning on the relationship between people and nature.

“A city modelling approach based on pollinators as prosperity agents…Sweet City aims to improve the way its inhabitants experience urban life,” reads a local municipality statement.

The pollinators – including bees, hummingbirds, bats, and butterflies, are crucial to the system. These creatures are therefore given ‘citizenship’ status in order to protect them and to highlight their importance.

“Pollinators were the key,” said Edgar Mora, who served for 12-years as Curridabat mayor and was crucial to the town’s biodiversity regeneration.

“Pollinators are the consultants of the natural world, supreme reproducers and they don’t charge for it,” he continued. “The plan to convert every street into a bio corridor and every neighborhood into an ecosystem required a relationship with them.

“Urban development should be, at least to some extent, aligned with the landscape instead of the other way round,” Mora added.

Urban corridors across the continent

Residents of Curridabat are encouraged to actively partake in the preservation of their area and various community programs have been set up.

These urban corridors are not exclusive to San Jose; its a concept which has been implemented in multiple South American states.

The benefits seem obvious, as Magalli Castro Álvarez of the National System of Conservation Areas in Costa Rica points out:

“Inter-urban biocorridors have a double objective: they create ecological connectivity for biodiversity but also improve green infrastructure through roads and river banks lined with trees that are linked with the small forested areas that still exist in metropolitan areas. They improve air quality, water quality and give people spaces to relax, have fun and improve their health.”