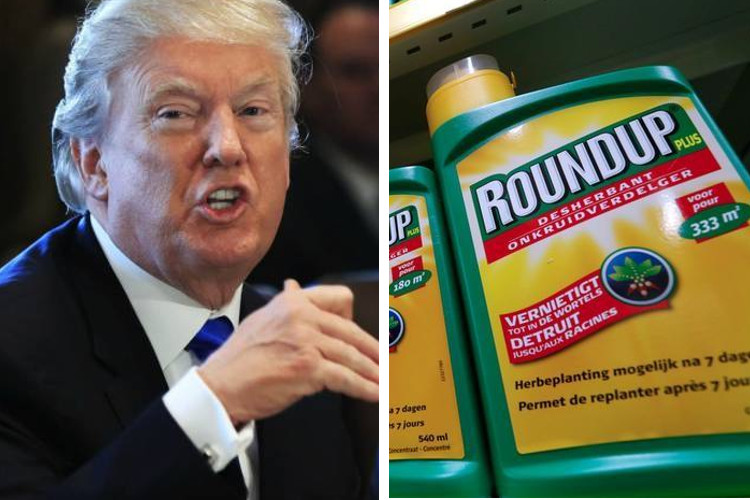 After Bayer AG, which recently acquired the Round-Up herbicide in a $63 billion buyout of Monsanto, has once again been found guilty in a California court for not informing customers that their product can cause cancer. The Trump Administration on the other hand, wants that ruling overturned.

In August of 2018, Monsanto lost their first big lawsuit alleging that the active ingredient of their Round-Up herbicide causes cancer. Dewayne Johnson, a groundskeeper in California, successfully argued that Monsanto had hidden evidence of a link to cancer in past documents and that Round-Up was the only possible cause of his non-Hodgkin’s lymphoma.

The California jury decided that the Monsanto company had acted with “malice” and was ordered to pay $289 million in damages, still arguing that glyphosate, the active ingredient in Round-Up “does not cause cancer.”

Ever since that day, thousands of plaintiffs have began suing Monsanto for causing their non-Hodgkin’s lymphoma. One of those plaintiffs is Edwin Hardeman, who was the first to challenge Monsanto in a federal court.

The judge overseeing Edwin’s suit even restricted him from discussing Monsanto’s past, Hardeman’s “personal history”, and information about regulatory decisions, barring him from talking about anything besides whether Round-Up caused his cancer. Despite what his attorneys argued was a huge disadvantage, he was still able to get his point across, won the suit against Monsanto, and was awarded $25 million.

“Although the evidence that Roundup causes cancer is quite equivocal, there is strong evidence from which a jury could conclude that Monsanto does not particularly care whether its product is in fact giving people cancer, focusing instead on manipulating public opinion and undermining anyone who raises genuine and legitimate concerns about the issue.” – Edwin Hardeman

However, the U.S. Environmental Protection Agency (EPA) and Justice Department want to see that ruling overturned by a higher court, according to a Ninth Circuit court brief filed in December. Bayer’s stock soared immediately thereafter.

This decision isn’t surprising seeing as though Trump ran his whole campaign on the economy, not environmental or health safety. According to a 2017 Associated Press analysis, almost half of Trump’s EPA appointees have previous industry ties, with about one-third previously working as lawyers or lobbyists for chemical or fossil fuels companies like Monsanto.

In November, a three-judge panel of the U.S. 9th Circuit Court of Appeals ruled that the Trump Administration had unlawfully excluded millions of tons of toxic materials from undergoing safety review, including common products such as fire retardant, house paint, and insulation.

The Trump Administrations argument as to why the Hardman case should be ignored is that the Trump EPA does not classify glyphosate as a carcinogen, and therefor Bayer and Monsanto have no need to label it as such.

However, a plethora of research shows the opposite. In a recent 2019 meta-analysis, scientists found that glyphosate exposure could raise the risk of developing non-Hodgkin’s lymphoma cancer by as much as 41%.

“Overall, in accordance with findings from experimental animal and mechanistic studies, our current meta-analysis of human epidemiological studies suggests a compelling link between exposures to GBHs and increased risk for NHL.” – Luoping Zhang, Study Author

Another recent study from Environmental Sciences Europe found that the EPA generally bases their conclusions on studies done by regulatory agencies, while ignoring independent and peer-reviews studies, “of which 70% were positive” for a glyphosate-cancer link.

It doesn’t appear that the Trump Administration will allow Bayer’s stock to go down without a fight, but I have a feeling that isn’t going to stop victims of Round-Up from seeking justice.

This article (The Trump Administration Wants to Reverse Round-Up Verdict, Protecting Bayer and Monsanto) as originally created and published by Waking Times and is published here under a Creative Commons license with attribution to Phillip Schneider and WakingTimes.com. It may be re-posted freely with proper attribution, author bio, and this copyright statement.