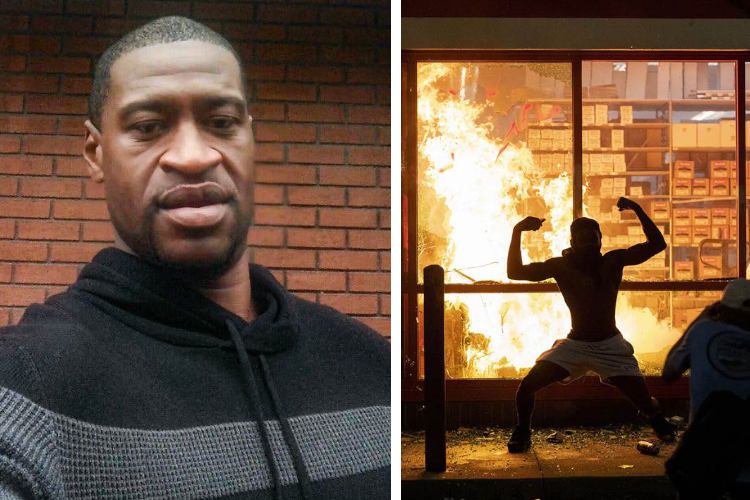 The U.S. is reeling from a shocking incident of police brutality and outright murder earlier this week. Minneapolis, MN Police officers detained an unarmed man, and were filmed kneeling with a knee on his throat after already placing him in handcuffs, choking him to death.

His name was George Floyd, a 46-year old black man from Minnesota who has tragically become the next high profile victim of our callous police state after he allegedly aroused police attention for attempting to use a counterfeit $20 bill at a local deli.

The officers proceeded to forcibly remove him from his vehicle and sat him down on the sidewalk, continuing to drag him to their police car where one officer knelt on his throat for over five minutes, as Floyd kept saying, ‘I can’t breathe,’ until he passed out. He was later pronounced dead after his lifeless body was transported from the scene as bystanders watched in horror.

The disturbing video can be seen below:

Witnesses at the scene called on the officers to lift their chokehold, affirming that “he’s not even resisting arrest right now,” and “you’re f—ing stopping his breathing right now, you think that’s cool?,” but to no avail.

Although a spokesman for the police department claimed that Floyd “physically resisted officers” after being removed from his vehicle, a new video posted to Twitter by award-winning journalist Alex Lehnert shows George only passively attempting to remain in the car while two policemen dragged him out.

New video sent to us shows the moment George Floyd was removed from his vehicle and handcuffed on 38th and Chicago.
Video courtesy of Christopher Belfrey pic.twitter.com/MiIIula4sA

The four officers involved in the incident were immediately fired from their jobs and are now under investigation by the FBI, but as of yet are not being held criminally accountable. This clear lack of justice has sparked protests from concerned citizens, groups like Black Lives Matter, and others in the area who view this incident as a racist attack against black Americans by a white police force.

The murder of George Floyd is yet another case in a train of similar incidents in recent years, and further demonstrates the need to de-militarize the police and hold bad officers accountable for their crimes.

“It’s real ugly. The police have to understand that this is the climate they have created,” said one protester. Another proclaimed, “I got on my knees and I put up a peace sign and they tear gassed me, and I said, ‘tear gas me again because non-violence seems healing.’”

In the last 24 hours, riots have taken a serious and deadly turn and a number of Minneapolis business have been looted and burned, with at least one fatality, and now it appears that riots have spread to Los Angeles, provoking stiff police responses and causing more injuries.

“This is an anger and spillover of what people are feeling, but this is not the right platform to express that,” said one of the organizers.

Racial tensions have always been strong in this country, but rather than inspiring serious reform, officials seem content to allow such tension to continue to build. Americans should be joining together to demand an end to police injustice and the militarization of local police forces across America. However, tension appears to be a top-down strategy in a nation that is being severely divided along the lines of race, politics, income and class.

For a ruling political class who wishes to maintain and ever-increase their power and control over a citizenry, the strategy of tension is a well-known approach to diverting attention and anger away from the actions, or inactions, of leaders and policy makers, and promoting chaos. It is also well-known that governments capitalize on division and chaos, using this as justification to clamp down, repress, and stifle liberties. Order out of chaos.

Politicians in Washington, DC could dismantle the growing militarization of police, and enforce police accountability, but instead they utilize every such incident to enact evermore draconian laws, such as the National Defense Authorization Act (NDAA), which give even more power and authority to unjust cops.

If we want to solve the problems of racism and police brutality, we must strike at the root, which is a system that has long been manipulating the American public, distorting reality, and falsely claiming to be serving people, while engaged in an unbelievable amount of corruption and evil. This system allows these types of inhumane actions, whether they be committed by cops on the streets of Minneapolis, or by drone pilots in the air over Yemen, to persist, while diverting public attention away from policy and onto identity.

When it comes to our freedom, the powers that be aren’t intimidated by a public divided over race, in fact, some have pointed out that the global elite may be planning a race war in order to achieve their political goals of more control and widespread acceptance of authoritarian policies.

The one thing that frightens them is the possibility that all of us we will come together to demand a return to a civl and free society. This will happen once we recognize the collective power that we have, and turn our attention to the true source of the problem.

This article (The Strategy of Tension Reemerges with the Murder of George Floyd by Minneapolis Police) as originally created and published by Waking Times and is published here under a Creative Commons license with attribution to Phillip Schneider and WakingTimes.com. It may be re-posted freely with proper attribution, author bio, and this copyright statement.