The People Will Rise 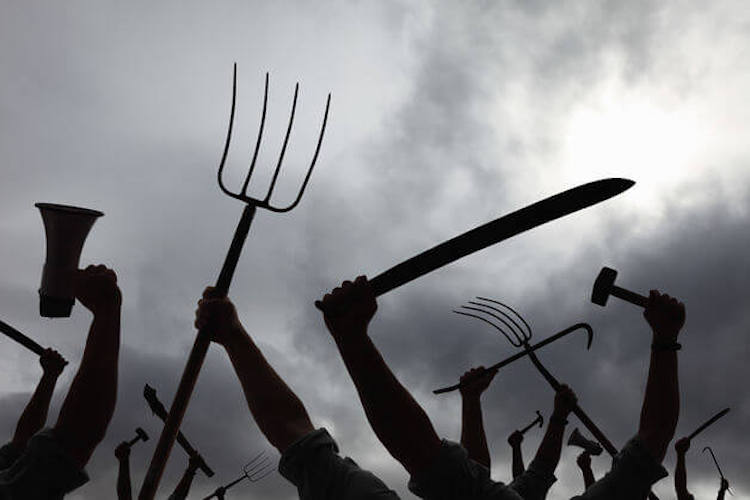 “We are done with fake democracy and undisguised top-down exploitation.”

There is only one solution for the insane mess that goes under the name of ‘democracy’ today, and that is to return to human scale largely self governing communities.

This was the great cry that went up in 1381 as the farmer revolutionary Wat Tyler jumped up onto a hay cart to denounce the despotic power mongering of the barons operating under the mantle of King Richard II. It was the pronouncement that sparked the ‘peasants revolt’.

Wat and his loyal army of peasants struck a highly resonant chord amongst the down-trodden countryside community of that time. Communities forced to pay poverty inducing tithes to the despotic barons while struggling to feed their families on the meagre acreage accorded to them.

If that sounds familiar, it’s hardly surprising. Just substitute ‘government’ for barons and ‘taxation’ for tithes and one immediately sees how the top down grip over working people has failed to change over the past six hundred or so years.

Keeping that fact in mind, now add the more recent historical advent of big banking, big pharma, monopolised media, global surveillance systems, the military industrial complex and the political/corporate centralisation of power – and you will have in front of you the main new tools of oppression we are faced with today.

The tools may be different but the repression is the same. What is missing is the revolt.

Now when one stops to really consider this situation, we are ready for such a revolt. We are done with fake democracy and undisguised top-down exploitation. The fact that it is tolerated is more a reflection of a lethargic and lack-lustre state of mind, than the fact that to be a slave is a tolerable condition. It isn’t and will never be.

There is an earthy, honest element within the family of man, that has not given-in to the seduction of ‘convenience’ and the shallow narcissistic materialism on display to day. There is an element capable of recognising that, thanks to the increasingly despotic powers of central control, centuries of hard fought gains in justice and dignity now hang by a perilous thread.

Some inspired counterforce needs to rise-up to reinstate them. A Wat Tyler; a people’s revolt; the revival of truth over the lie.

England is a country with a reputation for standing-up for the rights of the individual. For freedom.

So where are these qualities hiding today?

In 2020, with this country half way out of the vampiric clutches of the European Union and half way through a grim story of government imposed home imprisonment, insane ‘social distancing, mad masks and the promise of a completely useless CV-19 testing programme – what are the prospects for the future of the good people of this notorious island?

How can the citizens of 21st century Britain break free?

Wat Tyler is our clue “England should be a nation of self governing communities” declared Tyler as the answer to the relentless top down repression exerted by the arrogant barons.

The peasants revolt, fought with pitchforks, machetes and whatever other weapons could be fashioned out of farmyard tools, took on their oppressors and gave them a good hiding, until the farmer’s hero was publicly knifed in the back in front of the crowd at Smithfield in London, while meeting in open air debate with King Richard II, to negotiate the future of the farming community he had so bravely led out of slavery.

We have now arrived at the point of no return. The madmen and women of Westminster are mocking their electorate with complete disdain. Disdain for the basic needs and rights of all citizens. They are marionettes of the swinging banking moguls corporate giants and multi billionaire families who between them dictate the agenda for the greater part of the world. The man on the street and in the field is simply a pawn in a calculated, preplanned attempt to enslave humanity.

It’s past time to follow Wat’s proclamation. It’s time to break-out of the centralised control system once and for all and to re-establish ourselves in human scale communities, with human scale technologies and human scale farming practices.

We need to ditch government and become “self governing” so as to run our own lives on our own terms and at our own discretion.

Destiny beckons. The people will rise!