The COVID Illusion and the Currency Reset 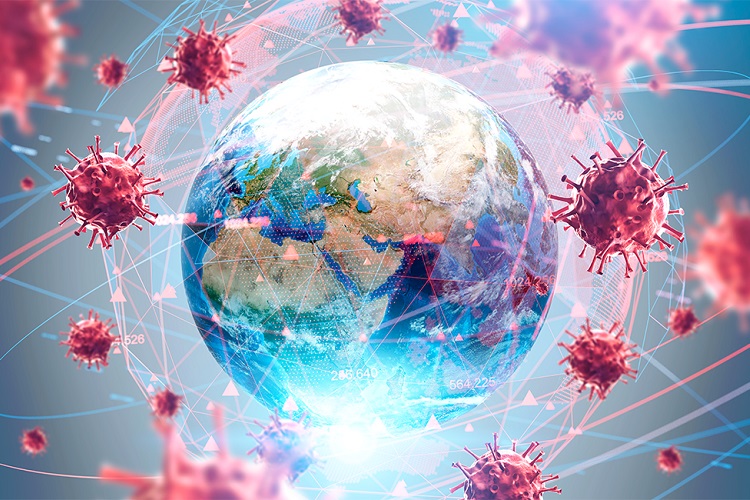 When this highly destructive farce is over, there are several ways things could go. In this article, I describe one path.

The World Health Organization (WHO) and the World Bank (WB) are joined at the hip. In 2018, they double-knotted their ties by forming a partnership to monitor outbreaks and epidemics before they spread.

Basically, behind the scenes, the deal looks like this: WHO creates the illusion of global epidemics; WB steps in later, to pick up the pieces of the result—injured national economies— by shelling out loans to governments.

These loans always carry conditions. The prime condition is: let in private, roaming, foreign, predatory, private investors so they can take over vital sectors of a nation: energy, agriculture, water, etc.

But this time, WHO, as planned, has gone ballistic. The lockdowns are shredding economies. It’s not going to be “here’s a loan.”

It’s more on the order of: we have to bail out everybody.

How is that done?

It, too, comes with conditions, gradually implemented. Basically, the deal is: “we pay you, and you obey us.”

The behavioral side of the model is the Chinese regime, which works obedience through a “social credit score.”

Infractions lower the score. In which case, the violator can’t travel on a plane or send his kids to certain schools or stay in certain hotels or start a business. There are levels of punishments.

Infractions include walking a dog off a leash, spreading fake news, crossing against a red light, failure to separate garbage properly, business fraud—little and big offenses.

Under a global UGI, it would be: “Here’s your monthly digital check, now follow orders, or your money might be reduced. Be a good citizen.”

Of course, a system like this requires complete and utter surveillance, public and private, every which way.

The holy grail is energy quotas for every person. “Mr. Smith, this is your wall talking through the glorious Internet of Things. Your energy number for the month is reaching its limit. I want to help you avoid that limit and the social credit score penalties that would be enforced. I’m going to initiate brown-outs and dimming in your home for the next two weeks. Your Internet will be shut down—excepting the hours of midnight to three in the morning. Cook all your meals for the day between four and five am…”

Behavior control. What’s going on now is a tune-up for the future. Now they say: stay indoors, don’t let in visitors. Stand in line outside stores, keeping a distance of six feet. Report people who appear sick. Get tested. Wash your hands a dozen times a day. In the future, the list of rules and regs will be different, but the overall theme will be the same: be a good citizen and contribute to a better world. Be sincere and earnest and helpful. Don’t rebel.

And just like now, many, many people will respond: “Yes, thank you. I like the straight and narrow. I like the feeling of contributing to something larger than myself. I like the collective. I like the fact that we’re all in this together.”

Because history means nothing to such people, they’ll never know names like SS, Red Guards, or Stasi. But that’s what they’ll be.

Unless the whole plan for a technocratic Brave New World is exposed and falls apart, because enough people remember another name and know what it means:

When this fake pandemic crisis is declared “done,” several themes will emerge. They will be promoted in various ways, employing many messages. I’m talking about official government and media propaganda.

First of all, the “pandemic” will be described as major turning point in human history. A great shock to the system. All sorts of professional shills and bullshitters will talk about BP and AP. BEFORE THE PANDEMIC and AFTER THE PANDEMIC.

We will be told, “We can’t go back to the way it was before.”

The first great propaganda theme will be: HELP US BUILD A BETTER WORLD. This message is for the sincere people who want to pitch in and do good, in a collective sense. “Let’s build a better world where we can avoid these pandemics, or see them earlier. Let’s form a civilization where equality and justice for all is the top priority. Let’s all share and care…” If you’re looking for logic, forget it. In whatever way they can, the propagandists will imply that somehow the pandemic was a signal that we must “do better.” We must “get through it together” as we did during the crisis. The love we showed then must be the love we show now. An appeal to idealists everywhere who fall for vague generalities like cats fall for catnip.

The second great theme, aimed at the educated class and the technical types and the scientists and “thinkers,” will be: ORGANIZATION. “We must organize world civilization more effectively.” Because somehow, that was the problem Before the Pandemic. Lack of organization allowed things to get out of hand. We can’t any longer be separate groups and nations going their separate ways. Too much disorder. We need better structures in every phase of life. We need more interconnection and coordination. The educated class loves this stuff. It fits their image of success. If society operates like a machine, problems will be solved.

The third great propaganda theme is aimed at all sorts of people who emerged from their lockdown and self-isolation, took a walk in a park on a spring day, and suddenly remembered what they had been missing. Their relief nearly reaches a point of hysteria, as at the end of a World War. The theme is: NEVER AGAIN. “We don’t want to go back to those dark days under any circumstances, and whatever it takes, we’re on board. Tell us what to do.”

With these themes in hand, the technocracy can be enacted. We’re all for building a better world. We must organize it with t’s crossed and i’s dotted. And we must never go back into the dark.

Unless people remember what is left out. THE INDIVIDUAL. And FREEDOM.

Technocratic operators are counting on us to forget. They’re counting on many people who value freedom to say, “Well, it’s all hopeless. I know what freedom is, but too many others don’t. So why bother. I’ll just surrender and float on the tide.”

Floating is an illusion. The tide moves in a planned direction. Toward a shore that isn’t pretty.