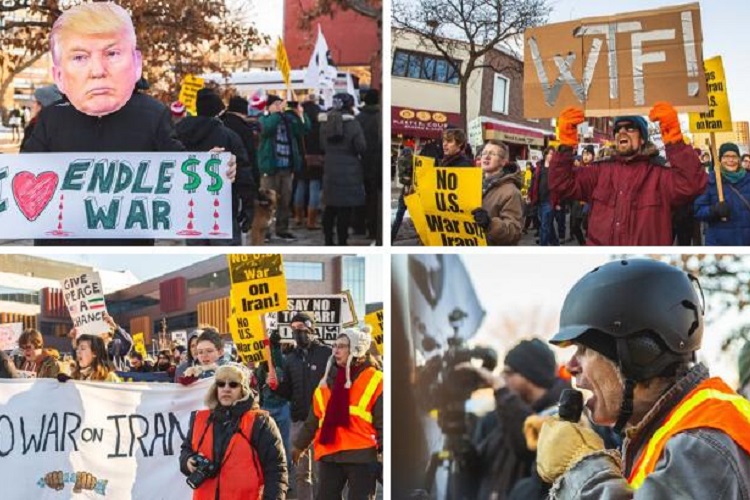 People from across the United States heeded calls from the ANSWER Coalition and CODEPINK on Saturday, resulting in protests against a possible U.S. war on Iran in more than 70 cities across 38 U.S. states.

The protests, demanding for U.S. troop withdrawal from Iraq and ending sanctions on Iran, were called for earlier this week in response to U.S. President Donald Trump’s ordering of additional U.S. troops to the Middle East in response to protests following U.S. air strikes. Tensions quickly increased as the U.S. ordered the assassination of Qassem Soleimani, the popular leader of Iran’s Islamic Revolutionary Guard Corps’ Quds Force, and, as a result, the protests quickly morphed into an emergency mobilization aimed at stopping what some fear could become World War III.

Tensions between Iran and the United States are nothing new, but have been steadily increasing ever since Trump formally reneged on the Joint Comprehensive Plan of Action (JCPOA)—also known as the Iran nuclear deal—in May of 2018.

Protesters across the country joined together to demand an end to U.S. presence in Iraq and the Middle East and to no new war with Iran. During the past nearly 30 years, more than one million Iraqis have died as a direct result of U.S. occupation, sanctions, and bombing, with the U.S. government having spent trillions of dollars.

Trump repeatedly promised on the campaign trail and after taking office that he would put “America first” and would bring our troops home. Instead, he repeatedly and recklessly brings the U.S. on the brink of war with various nations time and time again. But this far, many believe, he went too far.

Americans are fed up with endless wars, concerned about the future for their children, are appalled at the cost of war while the funding of services at home continually falls short, and deeply concerned about the wellbeing of innocent lives in the Middle East, and more. And so they joined together with one voice on January 4 to tell the Trump administration: “No War With Iran!”

Fayetteville residents take part in a day of protest as tensions between the U.S. and Iran increase @NWAMaryJ MORE: https://t.co/PnbyzHXqMn pic.twitter.com/DIZT8AzkGD

About 2 dozen protesters gathered near Senator McSally's Phoenix office this morning.
They are against a war with Iran.@Jennifer_Fox10 has more at 5.#fox10phoenix #Iran pic.twitter.com/RdN9FtAJXA

DSA Fresno with Peace Fresno out in solidarity against war and U.S. imperialism #NoWarOnIran pic.twitter.com/2PW84D4F0L

Hundreds of anti-war protestors gathered in Perishing Square today in Los Angeles, joining thousands of people across the world calling for the United States to withdraw from the middle east. #MyDayInLA #LosAngeles #NoWarOnIran #WorldWarThree pic.twitter.com/kuFCz6D0RW

“From Vietnam to Iraq, Syria to Venezuela, Bolivia & Iran. All wars are bullshit!” @jimmy_dore is in the streets #NoWarOnIran #USOutOfIraq pic.twitter.com/ocUJ0eyZPJ

There are hundreds of people here in San Francisco protesting the aggression against Iran #NoWarOnIran #NoWarWithIran #NoWar pic.twitter.com/CUemkDcczn

A view from above in #SanFrancisco as organizers introduce various speakers before marching to UN Plaza in protest of war in Iran @sfchronicle pic.twitter.com/8BpbNddAYn

I met a group of activists in #Boulder advocating peace with Iran. pic.twitter.com/fDGSYPb261

#NoWarOnIran rally in Denver, one of of 70+ events being held today across the country by @answercoalition, @codepink and other groups in response to the Trump administration’s escalating conflict with Iran pic.twitter.com/bZfLYaJ8MO

Joined comrades in Atlanta calling for and end to the occupation of Iraq and No War in Iran! #gapol #NoWarWithIran #NoWarButClassWar pic.twitter.com/24o8JF1hg7

Protesters and counter-protesters showed up in #Boise for one of over 70 nationwide protests called by @answercoalition, @PopResistance, @codepink, @VFPNational and many more organizations against the U.S. wars on #Iraq and #Iran. pic.twitter.com/Ra1nyh6fSE

Just say NO to #worldwar3. An administration hungry for war can't possibly care about its own people more than money. The world doesn't have to be like this… . #protest #protests #indianapolis #iraq #iran #marianne2020 #bernie2020 #warren2020 #antiwar #wwiii #worldwariii #ww3 pic.twitter.com/phdalAobFC

Amazing turnout at the today's anti-war rally in Iowa City despite the short notice and the 30° weather. A huge thanks to the @answercoalition, @WorldBeyondWar and countless others for organizing today's national day of protest and getting the word out. #NoWarInIran pic.twitter.com/jNKCzB0mQG

Numerous groups have come out to Douglass/Bardstown in Louisville today to call for “No War on Iran” and no more American troops in the Middle East following this week’s dramatic events.

More than 70 similar protests are planned around the U.S. today. https://t.co/ctfXEbDMzP pic.twitter.com/VCkpX82S3n

Today on short notice we flooded the streets of downtown Boston, and we'll do it again if we must. No war with Iran. pic.twitter.com/XRTpePkvPR

LO2MID 40S, LITE RAINBLOBS SHULD B FLOATED AWAY B4 6PM

100+ people in Detroit for the first protest of 2020 #NoWarOnIran pic.twitter.com/1SGQd9FdFR

The Mind Unleashed was live on Facebook from the Minneapolis rally:

This was the protest in #Minneapolis today #NoWarOnIran #NoWarWithIran #NoWarInIran #IranWar #Iraq
Proud to stand together with others. Estimated 700 folks showed up. We got a very, very positive response.
Support Our Troops! No War in Iran! 🇺🇲🦅🌎 pic.twitter.com/QXrwPg695R

From Iran to the Philippines, end the US War Machine. #NoWarWithIran pic.twitter.com/ahe7cZPgnn

I have a lot from today's #NoWarWithIran protest in Minneapolis today. I'll share the gallery link when they're all uploaded but I'll post some of my favorites here.. if I can manage to narrow it down. @answercoalition @codepink @AntiwarMN @WomenMarch4Paz pic.twitter.com/oYrIlgVqDQ

About 150 protesters gathered outside the Federal Courthouse in St. Louis and spoke out against a possible war with Iran. The protesters marched from the courthouse to the Soldiers Memorial. pic.twitter.com/1NbtdL612q

Photos from the St Louis Rally Against War with Iran from earlier today.#NoWarWithIran pic.twitter.com/MD4Gh6lxq0

Out here protesting in Las Vegas against war with Iraq and Iran #NoMoreWar #NoWarWithIran #LasVegas pic.twitter.com/Lh8T4J3esr

The people of Albuquerque say NO WAR ON IRAN! pic.twitter.com/z2dfjZfWvR

100+ people gather in Albuquerque to protest against war on Iran – one of several demonstrations taking place across the country today @KOB4 pic.twitter.com/cvVqiEdM4J

#Ithaca NY kicking off NO WAR WITH IRAN national day of action.

Rallies taking place in over 70 cities across the US.

The American people say no to war. pic.twitter.com/V6Eoc0ZWn1

And we were joined by these veterans. They want to stop endless war. pic.twitter.com/DwMEZXyl7t

BREAKING: hundreds out on a misty morning in Times Square to demand No War With Iran#NoWarOnIran pic.twitter.com/zl2EMUBoOu

There is a large anti-war protest happening now in Times Square.#NoWarWithIran pic.twitter.com/HKZV1alFCr

People are outraged by the U.S.’ acts of war on #Iran! @EnasAlsaffadi joins hundreds in the streets of New York City to demand #NoWarOnIran! #PeaceWithIran #NoWarWithIran pic.twitter.com/4zNTMdkfEu

100+ endured near-freezing drizzle in Clinton Square Syracuse to protest US policy toward Iran. One Iranian American worried she. Igbo lose relatives on both sides of conflict escalates to war. ⁦@waer883⁩ #NoWarWithIran pic.twitter.com/09l7PcryF8

Rev. Beth DuBois of @nysppc speaking out against war with Iran in Syracuse this morning. #PoorPeoplesCampaign #NoWarWithIran pic.twitter.com/VWULouNsxy

Today I joined my community in Syracuse in a cold rain, on one day’s notice, to protest the escalation of the war on Iran and demand that the US military get out of the Middle East. #USOutNow #NoIranWarhttps://t.co/sermBtc2Us pic.twitter.com/xXyk8Eg81s

Asheville, NC: A crowd of around 50 is holding a Honk for Peace protest against a possible war with Iran. pic.twitter.com/cf6JzrsBXf

Part of a small protest today in Asheville NC against a war on Iran. Please make your voice heard. pic.twitter.com/ePP1AEitGI

Over 60 people showed up Saturday in Durham for a "No War in Iran" protest. Many more are expected to show up for the same cause on Sunday in Raleigh. pic.twitter.com/bgTQXTa58v

Cleveland showed up in the rain to say No to War with #Iran – with @ClevePeace @codepink pic.twitter.com/I5a5n9PHVB

Here with a huge crowd in downtown #Portland, Oregon to say loud and clear: War is NOT the answer. We stand for peace and the end of U.S. imperialism. #NoWarInIran #NoWarWithIran #Iran pic.twitter.com/VNqp3c5Pwu

About 30 people are at a protest outside the state Capitol in Harrisburg opposing any further escalation of a war with Iran. The event was organized by the city's DSA chapter. pic.twitter.com/IS6qgkMLZs

That’s how you deal with Nazis. pic.twitter.com/yOakpxjUIb

Members of CODEPINK, Veterans for Peace, United Antiwar Coalition, among other groups gathered in Downtown State College to protest a potential war in Iran. https://t.co/rdzTafuPpu

I don't have a sign so I just took pictures. Dallas protest against invading Iran pic.twitter.com/TVw5pydX9U

Protesting the Iran war out here in Dallas.

At least when Gen Z kids are bleeding in the desert I can say I was here pic.twitter.com/h5quQZWI67

— Dredgen Phil is Losing His Mind in Quarantine (@Texas_Supernova) January 4, 2020

SALT LAKE CITY: Their chants of “Hands off Iran!” and “1, 2, 3, 4, we won’t fight a rich man’s war!” echoed off the Wallace F. Bennett federal building during the chilly afternoon protest. They held signs as they… https://t.co/yK3gLMREbj

Our chair being interviewed by @WTKR3 at the No War with Iran rally in Norfolk pic.twitter.com/7sFmZqJpTi

Even in the cold and wind and drizzle, hundreds of us were in the streets of Seattle protesting today. No justice. No peace. US out of the Middle East. #NoWarInIran #NoWarOnIran pic.twitter.com/aoReKKQL9q

.@Janefonda at the @answercoalition @codepink rally: "did we not learn the lessons of Vietnam?" Noting the peace mvt is also a climate mvt: the US fights wars for oil & the US military is the world's biggest polluter. #NoWarWithIran #WorldWarThree pic.twitter.com/AUKEoyvJdx

While Trump is spending his 367th day golfing at one of his own properties, a giant crowd has amassed outside of the WH chanting: “No justice! No peace! U.S. out of the Middle East!”

We should ABSOLUTELY care about what is happening with/ in Iran.

We MUST do some radical learning together about this situatiuation, and imperialism, militarism, and international solidarity in general.

.@MaxBlumenthal told 100s of anti war activists outside the White House today "why Qassem Soleiman was killed: He rolled back salafi jihadi forces the CIA had been backing in Syria to destabilize another independent state & he helped prevent Iraq from becoming a US client state." pic.twitter.com/Bx0nakYRb2

Madison Wisconsin showing up strong in the freezing cold on short notice to say: no war with Iran! US out of Iraq! Repeal the AUMF! No more blood for oil!#NoWarOnIran pic.twitter.com/Kyi175WcrI