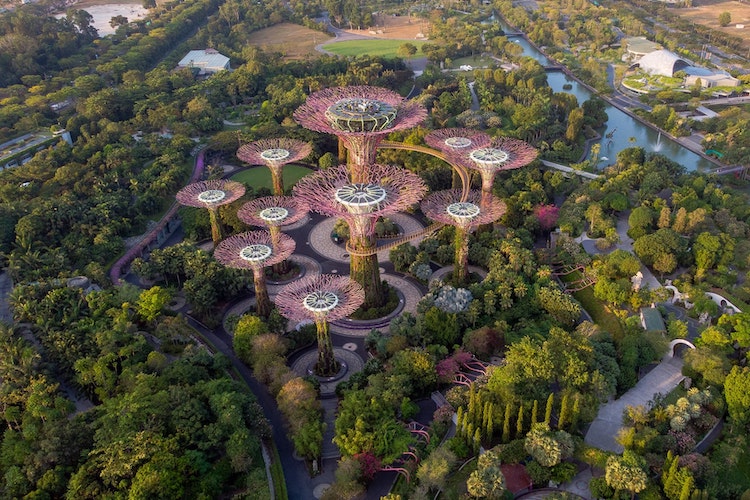 Languishing in the soft, silty mud, the living fossil looked as if it didn’t have a care in the world as it feasted on the fish left stranded in the tidal mangrove pools of the Sungei Buloh wetlands. However, the saltwater crocodile (Crocodylus porosus) might have been a little less at ease if it knew nearly 90% of its mangrove habitat in Singapore has been lost over the past century.

But now Singapore is looking to reverse this loss by mounting an ambitious reforestation campaign. In August 2020, the Singapore government announced the launch of the new Sungei Buloh Park Network, a 400-hectare (990-acre) park in the northern portion of the island that is a refueling site for migratory birds and is home to oriental hornbills, otters, saltwater crocodiles, and many other species.

Sungei Buloh is part of a wider project that aims to plant 1 million trees over the next 10 years as the government tries to improve habitat quality for the city-state’s wildlife while improving living conditions for its human residents.

The Sungei Buloh Wetland Reserve has a storied history. It is where Singapore’s smooth-coated otters (Lutrogale perspicillata) were first discovered in the 1990s after they were assumed locally extinct, and it is also the location of the critically endangered Eye of the Crocodile tree (Bruguiera hainesii). The city-state has 11 of the world’s last remaining 200 trees.

The Sungei Buloh Wetland Reserve is also an important stop for migratory waterbirds as they fly from Russia and Alaska to Australia and New Zealand along the East Asian-Australasian flyway. By forming the Sungei Buloh Park Network, Singapore is effectively tripling the size of the protected area comprising the reserve. This new park aims to safeguard the biodiversity of multiple areas, including the Kranji marshes, the Mandai mangrove and mudflat, and the coastal Lim Chu Kang Nature Park, which is state land. Within this patchwork of habitats, researchers have recorded 279 species of birds. These areas comprise many different kinds of ecosystems; Lim Chua Kang Nature Park alone boasts mangrove, woodland, scrubland and grassland habitats, and its diversity has attracted coastal birds such as the gray-headed fish eagle (Ichthyophaga ichthyaetus) and baya weaver (Ploceus philippinus).

Singapore’s mangroves are relatively easy to access, providing a living laboratory for researchers who have uncovered many of their secrets through decades of study.

“In the Mandai mangroves alone researchers have found 20 species that are new to science,” Friess said.

Researchers have also discovered that the Sungei Buloh wetlands and nearby Mandai mudflat are interdependent; seeds travel from the Mandai mangroves to the Sungei Buloh wetlands, and they are both important parts of the habitat of migratory shorebirds. Bird surveys and satellite tracking technology show that birds roost at Sungei Buloh while they feed on the mollusks, crustaceans and worms at Mandai when its extensive mudflat is exposed at low tide.

Visitors can currently view the Sungei Buloh wetlands from boardwalks and watchtowers, but starting in 2022, the public will also be able to watch migratory birds from hides situated near the Mandai mudflat. Those interested will also be able to tour the new coastal Lim Chua Kang Nature Park, where a historic 1910 colonial building at the end of a jetty is slated to become an education center.

Helping ourselves by helping the forest

As a city-state with limited land resources, Singapore has long been torn between urban development and protecting nature. It lost much of its primary forest in the 19th century to logging, then a century later, a fast-growing population and rapid urban development meant that trees were removed for land reclamation and to build reservoirs for water security.

This expansion has taken a big toll on the region’s mangroves. In 1953, Singapore’s mangrove forests covered an estimated 63.4 square kilometers (24.5 square miles); by 2018, researchers estimate that number had been reduced to 8.1 km2 (3.1 mi2) — a loss of more than 87%. The country is now working to replace its losses by turning areas used for industry and infrastructure back into natural-looking landscapes. The National Parks Board (NParks) has already had some success with this, converting a brutalist stormwater canal that ran through a residential area into a natural grassy floodplain to cope with urban water runoff, and reestablishing the Sungei Api Api and Pulau Semakau mangroves.

Launched on March 4, 2020, the One Million Trees project involves restoration of both inland and mangrove forests. As of October, 51,819 trees have been planted. Four varieties of native coastal and black mangroves tree species have been selected by NParks to be used in reforestation efforts: Palaquium obovatum, Buchanania arborescens, Fagraea auriculata and Sindora wallichii. The latter two species are considered critically endangered in Singapore.

The trees are sourced from Singapore’s tree banks, which include nurseries as well as trees that have been salvaged from construction sites. Up to 13,000 trees could be removed over the next 15 years to make way for transport and housing projects in Singapore, but the government has stated that for every tree it removes it will replant another. Trees from the tree bank are destined for Singapore’s parks, university grounds, rooftop gardens, roadsides and its outlying islands. They will also be used to help create 26 therapeutic gardens across the city for the aging Singaporean population. By the time One Million Trees officially wraps up in 2030, a goal is for all Singaporean households to be just a 10-minute walk from a park.

In the parks, city gardeners have been planting soil-boosting, nitrogen-fixing plants such as petai (Parkia speciosa) and great grasshopper tree (Archidendron clypearia), fruit-bearing trees such as the common sterculia (Sterculia parviflora) and the kumpang (Horsfieldia irya), and pollinator-attracting trees like pulai penipu paya (Alstonia angustifolia). They have also been helping to regenerate the rainforest by removing invasive weed species.