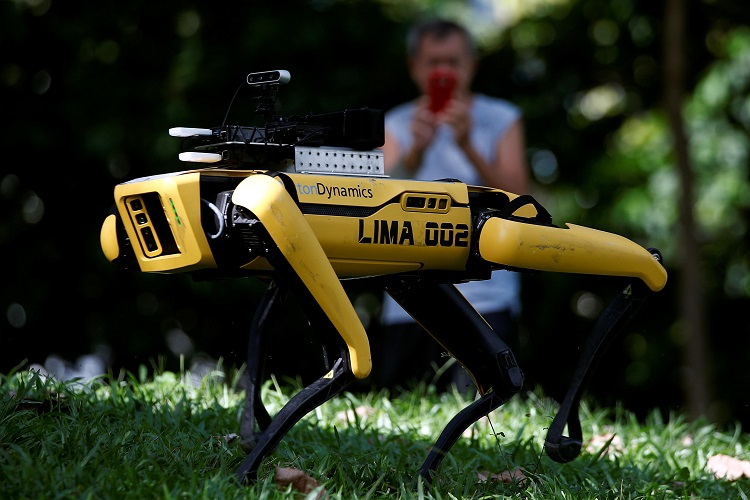 Governments around the world have been turning to technology to enforce quarantine related measures, including drones, robots, and advanced surveillance tracking. At the Bishan-Ang Mo Kio Park in Singapore, authorities deployed a four-legged robot named Spot, which was created by Boston Dynamics. The robot is roaming the park as a part of a two-week trial, to see if the robot could help enforce social distancing measures because machines are less likely to spread germs than human enforcers.

A sign was posted in the park warning visitors not to interfere with the robot’s duties.

Just received the most Singaporean pandemic content from a mate based in the little red dot pic.twitter.com/vqgnQ5F4D9

While the current deployment is just a test run, city officials are planning on placing similar robots in other areas if they decide that the trial was successful. Authorities have promised that they won’t be using the robot to collect any data, and that it is just being used to broadcast warnings to people.

GOOD BOY: This four-legged "SPOT" robot is currently on trial at the Bishan-Ang Mo Kio Park to see if can help with safe distancing efforts.Read more: https://bit.ly/3bhWjOI(Video by Dhany Osman / Yahoo News Singapore)

In the US, temperature sensing drones were deployed in some hot spots until local residents became outraged about privacy concerns, forcing the abandonment of the program.

Don't be surprised if you see a 4-legged robot patrolling in Bishan-Ang Mo Kio Park. Called Spot, the robot will be broadcasting a recorded message reminding park visitors to observe safe distancing measures. Don't worry about bumping into Spot as it is fitted with safety sensors to detect objects and people within 1m to avoid collision. Robots can observe safe distancing too! 🎥: Gin Tay #cybark #robot #coronavirus #covid19 #StraitsTimes #SGUnited #StayHome #circuitbreaker

Privacy is becoming a major concern as people are beginning to venture back out into society. Governments in some of the first countries affected by the outbreak have collected cellphone data as a part of their coronavirus containment strategy, and then used that data to track down and quarantine individuals who have come into contact with known coronavirus patients. Any resident that wants to leave their house is required to download a cellphone app that keeps a record of their health, and their phone’s GPS will be configured to recognize if its owner comes within a certain range of a known coronavirus patient.

If you have one of these apps downloaded on your phone and you come into contact with someone who tested positive for the virus, you will receive a notification or text message letting you know that you have been exposed and the message will instruct you to quarantine in your home for two weeks. If you refuse to comply with the quarantine, the authorities will know, because your cellphone will be set to notify them if you leave a certain perimeter. Leaving home without a phone isn’t an option either, because these apps are also used to gain entry to grocery stores and other businesses. The details behind this containment strategy were highlighted in an interview with Edward Snowden last month.