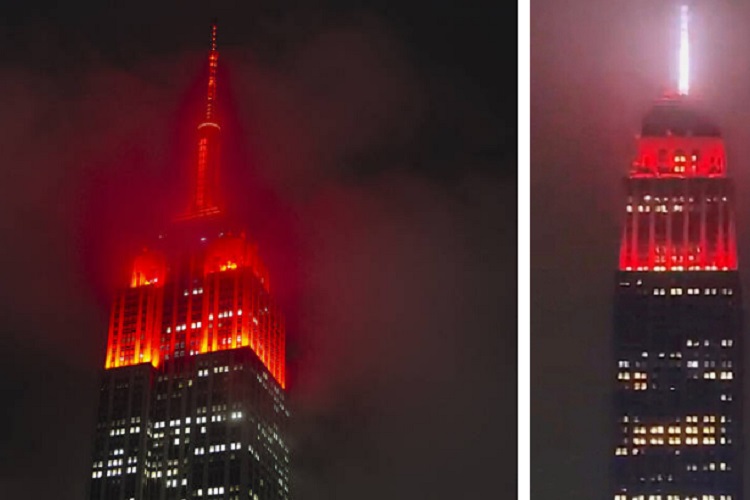 As the world continues to battle the coronavirus, each of us owes a profound debt of gratitude to our medical and emergency frontliners, who have been performing feats of heroism with great costs to their own health and safety.

Nowhere is this truer than in New York City, which is currently the epicenter of the CoViD-19 pandemic in the United States. With over 36,000 cases and nearly 800 deaths as of Monday, hospitals and other critical services in the city have been pushed near the breaking-point as New Yorkers contend with the unprecedented health crisis.

On Monday evening, the iconic Empire State Building made a gesture of gratitude with a glaring light display filled with symbolism that would make clear the city’s gratitude toward critical healthcare personnel and first responders.

Instead, the gesture came across to many New Yorkers as ominous, unsettling, and just plain frightening.

In an announcement on Twitter, the building’s management wrote:

“Starting tonight through the COVID-19 battle, our signature white lights will be replaced by the heartbeat of America with a white and red siren in the mast for heroic emergency workers on the front line of the fight.”

Starting today, @empirestatebldg’s classic white lights will be replaced with America’s heartbeat and a siren of red and white in the mast as we pay respect to our heroic emergency workers on the front line of the fight. pic.twitter.com/XQB4UFr3GD

And while the idea of solidarity and togetherness is always welcome in the resilient Big Apple, the sight of the skyscraper’s pulsating in blood-red amid low cloud cover struck many residents as simply bizarre—as if the city that never sleeps had become the realm of Mordor, fictional home to the Lord of the Rings arch-villain, Sauron.

Right, so, New York is Mordor and the Empire State Bldg is Barad-dûr. That’s the world we live in now. Ok. Totes ok. This is ok. Ok. https://t.co/d7WyE2uyLn

“The @EmpireStateBldg reminding us that the city is in the middle of an emergency,” tweeted Rita King, who accompanied her tweet with video of the menacing scene.

While supportive of the cause, she added that she “recommend[s] that the siren be replaced by the iconic pulsing heartbeat effect to reassure our heroic healthcare workers that their efforts will succeed, and soothe nervous New Yorkers now sheltering in place.”

The @EmpireStateBldg reminding us that the city is in the middle of an emergency. pic.twitter.com/50TjEjOogN

Turning the Empire State Building into a massive flashing siren was either a stroke of artistic genius or a seriously intense way of panicking people.

Another user added: “We know we’ve really screwed things up when the Empire State Building gets mad.”

Other residents hilariously lambasted the good-intentioned gesture that resulted in what appeared to be a “Glowing Red Tower of Portending Doom.”

Me: I think I’m finally learning how to keep my late-night coronavirus anxiety under control

While New Yorkers greeted the poorly-executed gesture with characteristic good humor, the city has witnessed nothing less than a humanitarian disaster over the past days.

On Monday evening, the State of New York reported over 7,000 new cases of the virus, bringing the total to over 67,000, with more than half of the cases in NYC alone.

Governor Andrew Cuomo reiterated that the worst of the novel virus outbreak is still yet to come despite hundreds of people dying in the 24 hours prior.