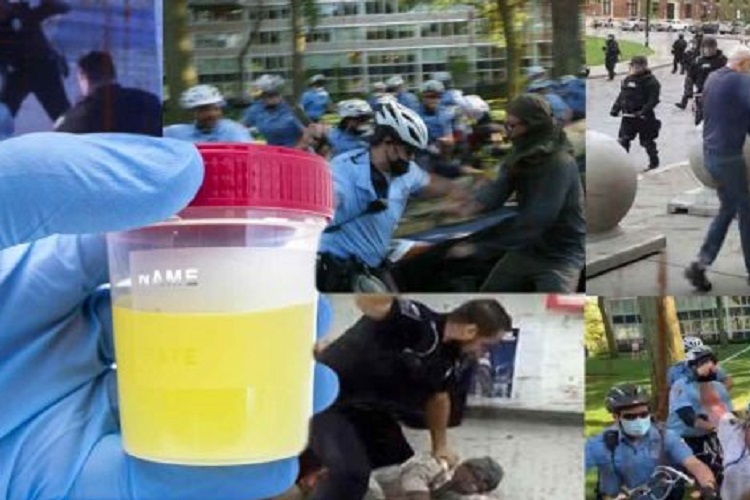 Cops in Louisville, Kentucky may soon be required to submit to a drug test if they become violent during a “critical incident.” In a first of its kind proposal in the department, the Louisville Metro Council is pushing through an ordinance that will require police officers to submit to a drug and alcohol test after they shoot or hurt someone.

Council President David James, D-6th District, who is co-sponsoring the legislation, along with Councilwoman Barbara Sexton Smith, D-4th point out how drugs and alcohol can severely alter a person’s perspective, which is why they want the citizens of Louisville to know if the officer was on drugs or alcohol at the time they commit violence.

According to the proposed ordinance:

WHEREAS, the Louisville Metro Council recognizes that the safety and well-being of our citizens and our police officers is imperative to the community;

WHEREAS, drug and alcohol use can impair judgement and exacerbate potential dangers to public safety; and

WHEREAS, detecting whether or not drug and alcohol use contributed to a critical police incident will help Louisville Metro Police Department investigate such incidents;

After a critical incident, the ordinance would require drug and alcohol testing be performed “as soon as practicable” after incidents that cause death or injury, and no later than the end of the officer’s shift and before any interviews are done.

As the Courier Journal reports, this ordinance, James said, would add “credibility and legitimacy” to the police force and prevent it from being a question hanging over officers’ heads.

“No one could make an accusation against them if they took the test and came back clean,” James said.

He said he had “no idea” if officers in the Breonna Taylor case submitted to such testing. Sexton Smith, too, said she did not know if they had been tested.

Currently, according to the Louisville Metro Police’s standard operating procedures, violence by a police officer is not “reasonable suspicion” to issue a drug test.

Why police officer violence is absent from this list remains a mystery as it only makes sense.

“It occurred to me that it was something we should look at,” Sexton Smith said. “It’s for everyone’s benefit and safety.”

“Anybody who does not have any issues with alcohol or drugs would welcome widespread testing, particularly after a critical incident,” she said.

St. Louis, Missouri passed a similar ordinance in 2016, days after it was revealed an off-duty officer in a car accident was drunk and had cocaine in his system, according to the St. Louis Post-Dispatch.

As the Free Thought Project reports on a regular basis, cops across the country are often caught committing the same crimes for which they routinely kidnap and cage people. From stealing from charities to selling and using drugs they steal from their jobs as cops, many police officers have proven to be as bad or worse than than the criminals from which they claim to protect society.

In case after case, TFTP has reported on police officers drinking on the job, doing drugs causing them to crash their patrol cars into middle schools, and most worrisome, using steroids.

It is important to point out that TFTP doesn’t think any drug should be illegal, including steroids. If people want to take performance enhancing steroids, who are we to stop them. But these deputies have hypocritically kidnapped and caged so many other people for these substances while selling and using them at the same time, which means they should most assuredly face accountability. What’s more, although we feel anyone should be able to do any drug they wish, it is not at all a good idea to allow people in law enforcement, with authority to use violence against citizens, to use these drugs as they are associated with rage.

In fact, the problem of police steroid use became so bad, in 2004, the DEA intervened to warn of the “possible psychological disturbances” of steroid raging cops.

Eventually, a few years later, the International Association of Chiefs of Police, made up of 16,000 members worldwide set a standard that “calls upon state and local law enforcement entities to establish a model policy prohibiting the use of illegally obtained steroids” by officers.

Not only do cops vehemently resist being drug tested by their departments, claiming it is a violation of their civil rights, they are also frequently caught selling steroids.

“This is one of the dirty little secrets of American law enforcement,” says Gregory Gilbertson, a former Atlanta cop who teaches criminal justice in the Seattle area and works as a legal expert on police standards and practices, according to Alternet. “Steroid testing is declining, and I think there’s an attitude in all these agencies of ‘see no evil, hear no evil, speak no evil’ because they don’t want to know about it. Because if they know about it, then they have to address it.”

Ignoring the problem of roid rage does not make it go away. As TFTP previously reported, the cases of cops using and selling steroids are anything but isolated.

The dangers of cops taking steroids are obvious, as the rage associated with their use can become uncontrollable. All too often, we see police officers immediately escalate situations to violence when de-escalation would have been far easier and safer. Steroids could be the reason.

“I keep seeing all of these cases where the level of anger and violence shown by officers makes no sense,” Gilbertson says. “And when things don’t make sense, they don’t make sense for a reason…Maybe steroid rage is a reason so many police officers seem so angry and aggressive.”

Cops on the juice feel indestructible, as if they have superhuman strength.

Or as the DEA puts it, “The idea of enhanced physical strength and endurance provides one with ‘the invincible mentality’ when performing law enforcement duties.”

Starting to make sense now? This ordinance should be applied on a national level.