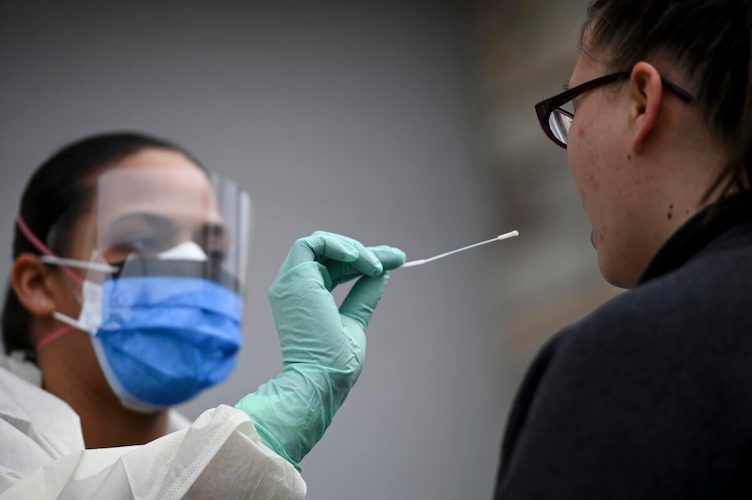 The POC (point-of-care) diagnostics market stands at about $18.8 billion globally, according to recent market trends, and is expected to grow by a third to $24.1 billion this year and projected to explode by 2024 to $46.7 billion. The main driver for these highly optimistic forecasts is the surge in healthcare technology demand brought on by the pandemic crisis, which is lining the pockets of big pharma and big tech, aided and abetted by the Defense Department’s various tentacles into the private sector, like DARPA or In-Q-Tel, where federal dollars are channeled into private enterprise through direct investment, stock purchasing, and grants, representing one of the clearest examples of how the military industrial complex works.

The “detection” of COVID-19 is among the most crowded segments of the POC diagnostics market and recent advances in the life sciences have made new technologies, such as mRNA-based vaccines and testing possible. The U.S. government, through the Department of Health and Human Services (HHS), has been intimately involved in helping these technologies along, and in the case of mRNA, specifically, has made considerable investments in its development dating back to November 2019 in the case of one company developing an mRNA-based COVID-19 diagnostic tool.

But in a paper published on the FDA’s website, independent journalist Jon Rappaport discovered that the CDC – at least in the summer of 2020 – had no virus isolates of the novel coronavirus “currently available” and reveals that all the assays used to design diagnostic testing algorithms for COVID-19 were of other isolates meant to “mimic clinical specimen.”

In other words, the tests aren’t designed to detect COVID-19 at all, which raises a number of questions, including why the Defense Advanced Research Agency (DARPA) just awarded $1.1 million to a molecular diagnostic firm that is working on a machine-learning diagnostic test for COVID-19, that uses mRNA biomarkers to read the immune system’s response.

The company’s “host-response diagnostics technology,” or HostDx, was initially hypothesized by Inflammatix’s co-founder, Timothy E. Sweeney, during his time at Stanford University’s Khatri Lab, which focuses on developments in machine learning applied to biomedical research. Founded in 2016, the young company was incubated by the University’s now-defunct StartX fund and is run by four Stanford University alumni.

The Stanford University “spinout” company named its COVID detection product CoVerityTM, which is billed as a way to help doctors make better decisions for COVID-19 patients upon arrival at hospital emergency rooms, through its mRNA rapid detection technology. Originally geared towards creating a more accurate and faster diagnosis method for detecting sepsis, which Sweeney calls one of the “holy grails of medicine,” Inflammatix’s core technology was expanded to include influenza testing with host-response biomarkers in November 2019, when it received a cost-sharing contract from the Biomedical Advanced Research and Development Authority (BARDA) worth up $72 million.

BARDA’s contract was followed up by $32 million in private venture capital funds, and in March 2020, a full week before the World Health Organization declared a global coronavirus pandemic, Inflammatix co-founders Sweeney and Purvesh Khatri – principal investigator for Khatri Lab – published a study in Nature Communications announcing “Improved identification of bacterial and viral infections through a “29-mRNA neural-network classifier.” The study cited “recent advances in machine learning and artificial intelligence” that can help distinguish “between bacterial, viral, and non-infectious inflammation.”

Another study published in April focused on the cost-effectiveness of the “Novel Multi-mRNA Host Response Assay for Diagnosis and Risk Assessment of Acute Respiratory Tract Infections,” which concluded that Inflammatix’s HostDx technology provided “substantial cost savings.” Among the lead researchers for the study was Inflammatix COO Jonathan Romanowsky, whose Linked-In profile describes him as an “expert in commercializing novel molecular diagnostics.”

The patently commercial feel of this endeavor is buttressed by the company’s origins in the Stanford’ start-up incubator, which was sued by another Stanford researcher and StartX fund beneficiary for using the fund “as a mask by using non-profit employees and resources to run a venture capital enterprise.” While the University denies any wrongdoing, StartX was quietly closed in 2019 as litigation in that case continues.

The technology being developed by Inflammatix to predict the risk of severe respiratory failure in patients with COVID-19 links directly to an implantable biochip, also developed with DARPA money and covered by this author, by virtue of its reliance on mRNA markers and health surveillance data sets to execute its algorithm.

CoVerity requires the kind of technology made possible by DARPA’s hydrogel paired with a light sensor technology, like that provided by Profusa, Inc. for DARPA’s biochip, which can deliver binary signals for the algorithm to process and make the diagnosis. Related technology has also been developed by one of Inflammatix’s board members, Steve Tablak, whose company GeneWeave BioSciences was acquired by Roche in 2015 for its “Smarticles technology,” which binds to family-specific DNA sequences of pathogens to produce a “luciferase reporter” or binary light emission that can be read by technology such as CoVerity.

Inflammatix CEO Timothy Seeney is confident that his algorithm is the best “method for test development that involves analyzing raw data [to] discover the best gene sets for specific applications.” Investors, apparently, agree and is the reason why the start-up decided to bring in onetime Roche exec, Oliver Liesenfeld, as the company’s Chief Medical Officer (CMO) to oversee the product’s clinical trials and the road to regulatory approvals as it looks for FDA approval by early 2021.

If you ask MedWhat’s CEO Arturo Devesa, the Stanford University Medical School researcher who sued his alma mater’s start-up accelerator StartX for fraud, the experience “has made him question everything he believed about Stanford’s high-minded pursuit of innovation and Silicon Valley’s promise of meritocracy.”

“I was really naive, and now I just see it for what it is,” Devesa told a San Jose news outlet in a 2019 interview. “It is not this amazing entrepreneur-friendly thing that everybody talks about,” he continued. “it’s just business. It’s like Wall Street.”

Given Stanford’s deep ties to U.S. military intelligence dating back to the cold war, through an early version of StartX called the Stanford Research Institute (SRI), Devesa’s assessment might reveal more about the true nature of Wall Street as an arm of the U.S. military industrial complex, which seems poised to make a killing on the brave new world of implantable biochips and AI-enabled diagnostic tools that are on the brink revolutionizing the healthcare industry.