Madagascar Introduces Stoves That Burn Rice Husks Instead Of Forests 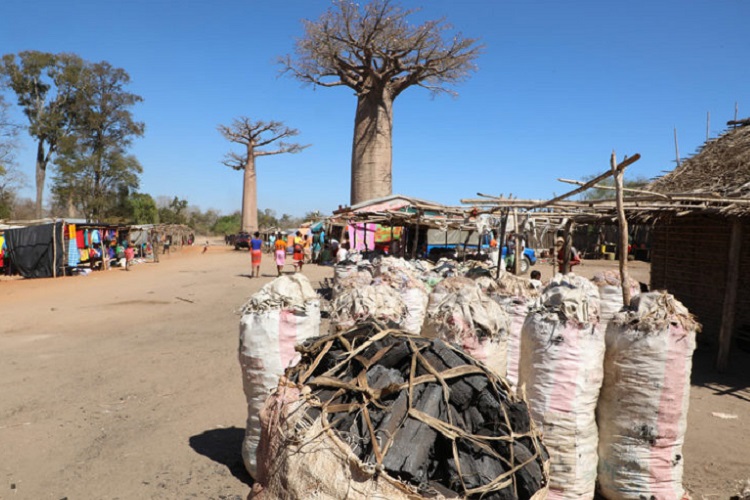 ANTANANARIVO, Madagascar — Charcoal is the main source of fuel Malagasy people burn at home, but its prevalence is accelerating the destruction of forests on an island famous for its biodiversity. To develop alternative energy sources that are not harmful to forests, a new project is proposing that people burn rice husks instead.

On May 26, the Christian group Hetsika Fampiraisana Kristiana ho an’ny Firenena (HFKF) launched the ATIALA project (Aza Tapahana Intsony ny Ala, or “stop deforestation” in Malagasy) in the capital Antananarivo. With support from the environment ministry, the project introduced a new kind of stove that uses rice husks for fuel.

According to HFKF calculations, 17 stoves will save 1 hectare (2.5 acres) of forest per year. The ATIALA stoves were specially designed by Faly Rasamimanana, the project’s coordinator and the director of a Iychee export company, Faly Export, that is based in the northeastern city of Toamasina.

Initially, HFKF will distribute the ATIALA stoves free of charge in two rural communities near the capital. The group intends to produce 1,000 stoves per week and distribute 100,000 throughout the country by the end of the year. Eventually it will sell the stoves for 30,000 Malagasy ariary apiece (around $8). The group is working with local administrative bodies and environmentally focused ministry partners to approach local communities and raise awareness about the stoves.

Rice is the staple food in Madagascar, and rice farming plays a major role in the national economy. Rice production centers generated an estimated 1 million tons of rice husks per year. A small amount is used for animal husbandry and the manufacture of potting soil, but the majority goes unused.

The new ATIALA stoves have several advantages over charcoal stoves. In terms of performance, they boil water in seven minutes, whereas charcoal stoves take 10 minutes. People can use the rice-husk ashes as a natural fertilizer in agricultural regions.

There is also a price advantage. HFKF launched the ATIALA project in the midst of the COVID-19 pandemic, when household incomes have declined. “Our main objective is to facilitate household purchasing power, especially in these times of crisis,” Rasamimanana says. “At the same time, our alternative saves forests for future generations.”

Each month, a household uses on average one bag of charcoal, costing about 30,000 ariary. A month’s worth of rice husks costs just 4,000 ariary, or $1 for four bags. An ATIALA stove therefore pays for itself after the second month.

According to the Indian Ocean Commission, an intergovernmental organization based in Mauritius, 98% of Malagasy households rely mainly on wood energy. Broadly, rural areas tend to rely on firewood and urban areas on charcoal.

For many households, charcoal is more affordable than gas or electricity, which aren’t even available in many places. Every month, Beby Rabeniazy, a housewife living in the Andrefan’ny Mananjara neighborhood of Antananarivo, says she spends between 40,000 and 50,000 ariary, $10 to $13, on charcoal. “Gas might be cheaper for me, but I can’t afford to pay more than 100,000 ariary [$26] in one go,” she says.

The duality of poverty and deforestation

The government has undertaken other initiatives to encourage people to reduce their consumption of fuelwood. For example, the environment ministry has supported a project to produce compact straw-based charcoal in Analalava district in northwestern Madagascar.

Although charcoal is mainly sourced from forestry plantations, uncontrolled deforestation is on the rise, destroying large areas of natural forest. The World Bank reports that Madagascar’s annual gross domestic product per capita was $522 in 2019, the ninth lowest in the world. According to the same source, the agricultural sector is the main provider of employment in rural areas, providing 85% of total employment. However, households are finding it increasingly difficult to make a living from crops or livestock. They are turning instead to the sale of charcoal, which provides an almost daily additional income.

“Because of the low, sporadic yield from agriculture, farmers prefer to come to the protected areas to cut trees and make charcoal,” says Mamy Rakotoarijaona, director-general of Madagascar National Parks, the quasi-governmental agency that manages numerous protected areas in the country.

Dealers in town buy wood from rural areas. When the plantations are no longer sufficient to meet demand, the charcoal-makers pull up tree stumps, eliminating the possibility that the tree might regrow. They also turn to illegal logging.

This high demand for charcoal is taking a grave toll on Madagascar’s forests and their ecosystems. According to Global Forest Watch, between 2001 and 2019 the island lost 3.89 million hectares (9.61 million acres) of tree cover, equivalent to a loss of 23% of its tree cover since 2000. Much of this loss was due to fuelwood harvesting, as well as to clearing for agriculture or grazing.

“Even though we patrol tirelessly, it is still difficult to educate the population and raise awareness about the importance of forests,” Rakotoarijaona says.

Experts agree that low household purchasing power tends to increase demand for charcoal and, as a result, illegal logging by rural people who often have no alternative to selling charcoal in order to make a living. The government has enacted severe sanctions to combat these illegal practices. The long-term success of the ATIALA project rests on convincing people of the economic and environmental benefits of alternative energy sources, in both the short and long terms.