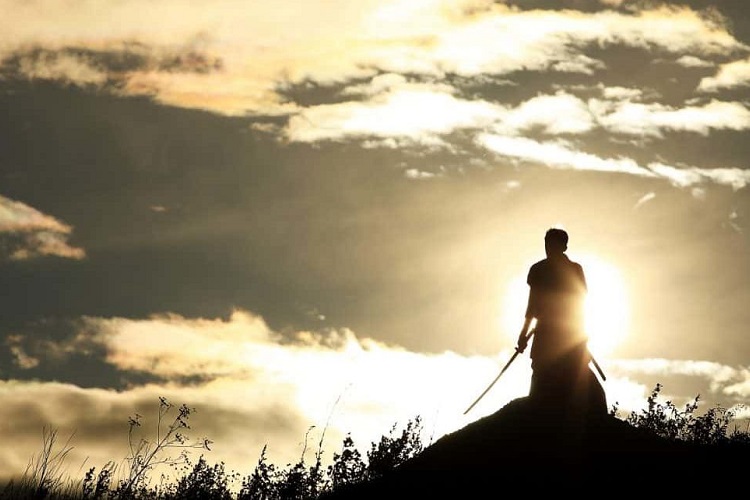 A warrior is someone who lives in the right relationship with death. Doing so lights a fire in the heart that fuels a passionate and conscious life. For most of us, death is a boogie man that we try to forget. Since death is both inevitable and terrifying, there seems to be no sense in thinking about it. Worrying about death is as senseless as worrying about the color of your eyes, right?

Nothing could be further from the truth. Death is the ultimate teacher. And its student becomes a warrior.

Death is the great stalker and the eternal hunter. It’s coming after all of us. And at any moment…BAM…it can strike and everything will be over in an instant. Only a warrior will be truly ready.

In the face of your inevitable death, you can do one of two things:

A warrior knows that in the face of death, there is no time for superfluous thoughts and actions. The mindfulness of death separates the wheat from the chaff and reminds us of what really matters.

A warrior constantly sharpens his blade in preparation for his confrontation with death. Wisdom says that we must prioritize expending our energy on what we know is most certain. If we will be traveling in the desert, then it is wise to bring plenty of water and clothing to protect from dehydration and hyperthermia. It’s unwise to take a machete just in case a snake attacks but then forget water and clothing.

So it is with death. It is the one thing that is most certain in life. Therefore living without preparation for death is an enormous mistake. Worse yet, it makes us weak and conceited. Death is the worthy adversary that every warrior needs in order to manifest his higher self. He must live a life that prepares him to confront the great hunter.

If we want to be warriors, we must be aware of every moment. We must be deliberate in our intentions and actions. We must sharpen our skills and be as powerful as possible. If we accept that death may strike at any moment, then we must also accept the possibility that every single decision that we make could be our last.A warrior is willing to die for every decision that he makes.

Are you willing to meet death with a bag of potato chips in your hand while watching an episode of the Kardashians? Are you willing to die choking on food that you were eating while gossiping about your co-workers?

Death also puts our concerns into perspective. It reminds us that we are finite, and so are our problems. That job that you hate, that significant other that is driving you crazy, and that illness that is zapping your life away, all seem much smaller when you think of the end. In the face of death, all of our concerns are nothing but a flicker of a candle in the wind that is over before it even began.

Death also puts our relationships into perspective. When we deny death, we experience our relationships with others as burdensome. For example, suppose that you hate the fact that your romantic partner smacks their lips when they eat. Then you think about how you will have to hear them smack their lips for another five thousand times. Then you want to shoot yourself.

But if we accept the reality of death, then we treat every interaction with others as if it is our last. Suddenly the smacking lips seem insignificant, and they may even seem nostalgic and cute in light of death.

A legendary life is one lived so that one can smile in the face of death and its recounting of life.

Death is the final witness. All spiritual traditions — not to mention the accounts of millions of people who have had near-death experiences— teach us that at the moment of death, our life flashes before our eyes. Therefore if you wish to face death with courage, then you must live a life worth witnessing.

When your time comes, will you be able to look death in the eye and say: “I lived a true life!” Or, will you cower under its gaze? Don’t let your last thoughts be: “I have wasted my life!”

Let me offer a few examples:

There are two legendary historical figures have shaped my understanding of life more than anyone else: Thomas Paine and Friedrich Nietzsche.

Thomas Paine is one of the founding fathers of the United States. He spearheaded the American Revolution with his famous pamphlet Common Sense, which popularized the idea of independence from the British empire.

What most people don’t know is that the American Revolution was not enough for him. He went on to participate in the French revolution following the American one. He was imprisoned during the Reign of Terror and marked for death by guillotine. While rotting in his own filth of typhoid in this French prison, he wrote a book that changed my life called “the Age of Reason.” He managed to escape the guillotine by an accident of fate.

When he died many years later, his funeral was attended by only six people, in spite of his superhuman accomplishment. He was excommunicated by most of his contemporaries for criticizing their ownership of slaves, and for championing science over religion.

He never wavered in his values and the world is a better place because of it.

Friedrich Nietzsche was appointed as a University Professor at the age of 24, which was unheard of in his time. He was forced to flee academia soon after because his writing criticized the culture of his time for being superficial and conformist.

Later on, he had contracted several diseases during his service as a soldier and medic in the Prussian army. He suffered from daily migraines and was often bedridden and alone for months at a time. During the few hours in the day when he felt OK, he wrote his groundbreaking books that changed history.

Nietzsche readily sacrificed all of his opportunities for wealth, power, and sex in order to deliver his message. There are few thinkers in history who have had more influence on our time than him. He is considered to be the forefather of existentialism, psychoanalysis, and post-modernism.

You too can live like a warrior and die as a legend.

How we can live and die as legends:

Most of us live under the illusion that there is plenty of time to make changes in our lives. The truth is that we have no time.

If you want to manifest your inner greatness, then you must begin the journey of warriorship today.

Accept that your self-image is insignificant in the face of death.

Accept that your self-importance is petty in the face of death.

Accept that your need for control is ridiculous in the face of death.

Then new doors will open to you that you never thought possible.

That’s how you live a legendary life.