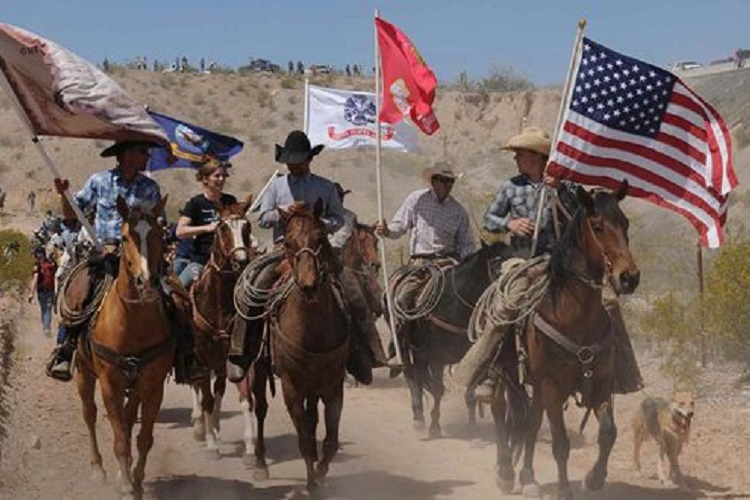 Most of the nation is now entering at least their third week of government-mandated stay-at-home orders. Many folks are doing just fine during the crisis, but others, especially those who had their businesses shut down or lost their jobs, are not doing fine. As the government continues to tell people to remain calm and wait it out, as the following case illustrates, others are bucking the system.

In Boise, Idaho last Friday, a few dozen people violated Gov. Brad Little’s order to avoid group gatherings, and met inside an old factory building to discuss how to move forward in these uncertain times.

Led by Ammon Bundy, meeting goers were given information on and discussed how to create a network of people ready to come to the aid of those who have been affected by the government’s shutdown of the economy.

“I think people are very interested,” Bundy said in response to whether he envisions a national effort pushing back against restrictions on businesses and large gatherings or other efforts intended to protect public health.

“I think we have to think about if we were successful here, spreading it, at least the knowledge and things we learn, way beyond even the state of Idaho,” he added.

Bundy urged attendees that it was not at all time for a violent uprising and told them to remain peaceful. However, he noted that if it gets bad enough, this network, which would essentially be a militia, would take a stand.

“If it gets bad enough and our rights are infringed upon enough that we physically stand in defense in whatever way we need to — but we hope we don’t have to get there,” Bundy said.

During the meeting he made sure to dispel any calls to violence and encouraged fellow Idahoans to use restraint and not “instigate” situations.

“You have to make sure that every effort has been taken to try to resolve it in a peaceful manner, in a prudent manner. That is what we have to do to be right with God and to be right with our fellow man,” Bundy said.

Bundy said this entire resistance to government imposed economic devastation is dependent upon unity of the people.

“People will stand if they have confidence that there’s others who are going to stand with them,” Bundy said.

Bundy’s comments and support did not go unnoticed and received criticism from the community.

“There are a lot of people that listen to those voices around here,” said Dr. Hans Hurt, an emergency doctor at Bonner General Health, a medical center in the town of Sandpoint, 45 miles north of Coeur d’Alene, according to the NY Times. “Even if it’s just a small group that wants to exercise their right to assemble, it puts the community at large at such a high risk.”

But it wasn’t all negative feedback. According to the Times, Bonner County Sheriff Daryl Wheeler posted an open letter saying that the public had been “misled” by public health officials’ dire predictions and called on the governor to convene an emergency session of the Legislature to debate his stay-at-home order.

“In the spirit of liberty and the Constitution, you can request those that are sick to stay home,” Sheriff Wheeler wrote. “But, at the same time, you must release the rest of us to go on with our normal business.”

For those who may not know who Ammon Bundy is, he is the man who along with his father and brothers, helped spearhead the massive act of resistance in Oregon against the Bureau of Land Management that garnered world wide attention.

Before that, the Bundy family initially made headlines in 2013 when the Bureau of Land Management brought armed agents in to seize rancher Cliven Bundy’s cattle after his refusal to pay federal authorities a massive debt – which he claims is illegitimate.

In response to the militarized response in Nevada by the BLM, militia from across the U.S. mobilized and coordinated a response which saw hundreds of armed Americans stand up to what they perceived as vast federal overreach. It happened again in 2016 as another armed group of militiamen took over Malheur National Wildlife Refuge, in rural Oregon.

They have proven on multiple occasions the ability to organize large and heavily armed protests — and get away with it.

The group of men who seized the refuge, in rural Oregon were found not guilty in 2016, vindicating brothers Ammon and Ryan Bundy after the 41-day standoff that brought nationwide focus to long-running dispute over federal control of rural land in the Western United States. However, the charges from the 2013 incident were still pending.

In 2018, however, Nevada rancher Cliven Bundy and his sons were released by a federal judge in Las Vegas, after she dismissed with prejudice all charges against them. Prosecutors’ failure to disclose evidence had led to a mistrial.

US District Court Judge Gloria Navarro ruled on January 8, 2018, that the government committed “flagrant prosecutorial misconduct” in the process against Bundy and his sons in relation to the 2014 armed standoff with federal agents over grazing rights.

It is important to point out that TFTP is not advocating a stance on this issue, however, love them or hate them, the Bundy family has proven time and again that when a well-armed and organized resistance is mounted against a perceived injustice, the government listens.