The Attack on Civil Liberties in the Age of COVID-19 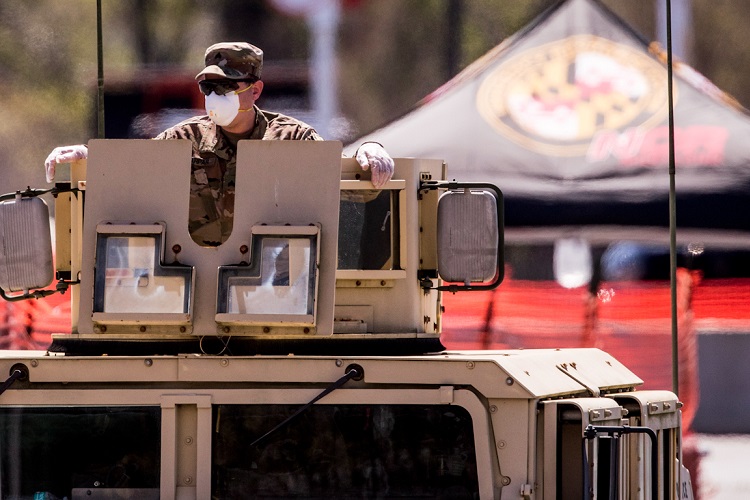 You can always count on the government to take advantage of a crisis, legitimate or manufactured.

This coronavirus pandemic is no exception.

Not only are the federal and state governments unraveling the constitutional fabric of the nation with lockdown mandates that are sending the economy into a tailspin and wreaking havoc with our liberties, but they are also rendering the citizenry fully dependent on the government for financial handouts, medical intervention, protection and sustenance.

Unless we find some way to rein in the government’s power grabs, the fall-out will be epic.

Everything I have warned about for years—government overreach, invasive surveillance, martial law, abuse of powers, militarized police, weaponized technology used to track and control the citizenry, and so on—has coalesced into this present moment.

The government’s shameless exploitation of past national emergencies for its own nefarious purposes pales in comparison to what is presently unfolding.

Deploying the same strategy it used with 9/11 to acquire greater powers under the USA Patriot Act, the police state—a.k.a. the shadow government, a.k.a. the Deep State—has been anticipating this moment for years, quietly assembling a wish list of lockdown powers that could be trotted out and approved at a moment’s notice.

It should surprise no one, then, that the Trump Administration has asked Congress to allow it to suspend parts of the Constitution whenever it deems it necessary during this coronavirus pandemic and “other” emergencies.

In fact, the Department of Justice (DOJ) has been quietly trotting out and testing a long laundry list of terrifying powers that override the Constitution.

We’re talking about lockdown powers (at both the federal and state level): the ability to suspend the Constitution, indefinitely detain American citizens, bypass the courts, quarantine whole communities or segments of the population, override the First Amendment by outlawing religious gatherings and assemblies of more than a few people, shut down entire industries and manipulate the economy, muzzle dissidents, “stop and seize any plane, train or automobile to stymie the spread of contagious disease,” reshape financial markets, create a digital currency (and thus further restrict the use of cash), determine who should live or die…

You’re getting the picture now, right?

These are powers the police state would desperately like to make permanent.

Bear in mind, however, that these powers the Trump Administration, acting on orders from the police state, are officially asking Congress to recognize and authorize barely scratch the surface of the far-reaching powers the government has already unilaterally claimed for itself.

Unofficially, the police state has been riding roughshod over the rule of law for years now without any pretense of being reined in or restricted in its power grabs by Congress, the courts or the citizenry.

This current pandemic is a test to see whether the Constitution—and our commitment to the principles enshrined in the Bill of Rights—can survive a national crisis and true state of emergency.

Here’s what we know: whatever the so-called threat to the nation—whether it’s civil unrest, school shootings, alleged acts of terrorism, or the threat of a global pandemic in the case of COVID-19—the government has a tendency to capitalize on the nation’s heightened emotions, confusion and fear as a means of extending the reach of the police state.

This coronavirus epidemic, which has brought China’s Orwellian surveillance out of the shadows and caused Italy to declare a nationwide lockdown threatens to bring the American Police State out into the open on a scale we’ve not seen before.

Every day brings a drastic new set of restrictions by government bodies (most have been delivered by way of executive orders) at the local, state and federal level that are eager to flex their muscles for the so-called “good” of the populace.

This is where we run the risk of this whole fly-by-night operation going completely off the rails.

It’s one thing to attempt an experiment in social distancing in order to flatten the curve of this virus because we can’t afford to risk overwhelming the hospitals and exposing the most vulnerable in the nation to unavoidable loss of life scenarios. However, there’s a fine line between strongly worded suggestions for citizens to voluntarily stay at home and strong-armed house arrest orders with penalties in place for non-compliance.

More than three-quarters of all Americans have now been ordered to stay at home and that number is growing as more states fall in line.

Schools have canceled physical classes, many for the remainder of the academic year.

Many of the states have banned gatherings of more than 10 people.

In Washington, DC, residents face 90 days in jail and a $5,000 fine if they leave their homes during the coronavirus outbreak. Residents of Maryland, Hawaii and Washington state also risk severe penalties of up to a year in prison and a $5,000 fine for violating the stay-at-home orders. Violators in Alaska could face jail time and up to $25,000 in fines.

Kentucky residents are prohibited from traveling outside the state, with a few exceptions.

New York City, the epicenter of the COVID-19 outbreak in the U.S., is offering its Rikers Island prisoners $6 an hour to help dig mass graves.

In San Francisco, cannabis dispensaries were included among the essential businesses allowed to keep operating during the city-wide lockdown.

New Jersey’s governor canceled gatherings of any number, including parties, weddings and religious ceremonies, and warned the restrictions could continue for weeks or months. One city actually threatened to prosecute residents who spread false information about the virus.

Oregon banned all nonessential social and recreational gatherings, regardless of size.

Rhode Island has given police the go-ahead to pull over anyone with New York license plates to record their contact information and order them to self-quarantine for 14 days.

South Carolina’s police have been empowered to break up any public gatherings of more than three people.

Of course, there are exceptions to all of these stay-at-home orders (in more than 30 states and counting), the longest of which runs until June 10. Essential workers (doctors, firefighters, police and grocery store workers) can go to work. Everyone else will have to fit themselves into a variety of exceptions in order to leave their homes: for grocery runs, doctor visits, to get exercise, to visit a family member, etc.

Throughout the country, more than 14,000 “Citizen-Soldiers” of the National Guard have been mobilized to support the states and the federal government in their fight against the coronavirus.

Thus far, we have not breached the Constitution’s crisis point: martial law has yet to be overtly imposed (although an argument could be made to the contrary given the militarized nature of the American police state).

It’s just a matter of time before all hell breaks loose.

If this is not the defining point at which we cross over into all-out totalitarianism, then it is at a minimum a test to see how easily we will surrender.

These lockdown measures—on the right of the people to peaceably assemble, to travel, to engage in commerce, etc.—unquestionably restrict fundamental constitutional rights, which might pass muster for a short period of time, but can it be sustained for longer stretches legally?

That’s the challenge before us, of course, if these days and weeks potentially stretch into months-long quarantines.

At the moment, the government believes it has a compelling interest—albeit a temporary one—in restricting gatherings, assemblies and movement in public in order to minimize the spread of this virus.

The key point is this: while we may tolerate these restrictions on our liberties in the short term, we should never fail to be on guard lest these one-time constraints become a slippery slope to a total lockdown mindset.

What we must guard against, more than ever before, is the tendency to become so accustomed to our prison walls—these lockdowns, authoritarian dictates, and police state tactics justified as necessary for national security—that we allow the government to keep having its way in all things, without any civic resistance or objections being raised.

Most of all, don’t be naïve: the government will use this crisis to expand its powers far beyond the reach of the Constitution.

That’s how it starts.

Travel too far down that slippery slope, and there will be no turning back.

As I make clear in my book “Battlefield America: The War on the American People,” if you wait to speak out—stand up—and resist until the government’s lockdowns impact your freedoms personally, it could be too late.

Just because we’re fighting an unseen enemy in the form of a virus doesn’t mean we have to relinquish every shred of our humanity, our common sense, or our freedoms to a nanny state that thinks it can do a better job of keeping us safe.

Whatever we give up willingly now—whether it’s basic human decency, the ability to manage our private affairs, the right to have a say in how the government navigates this crisis, or the few rights still left to us that haven’t been disemboweled in recent years by a power-hungry police state—we won’t get back so easily once this crisis is past.

Constitutional attorney and author John W. Whitehead is founder and president of The Rutherford Institute, where this article (John Whitehead: The Attack on Civil Liberties in the Age of COVID-19) was originally published. He is the author of A Government of Wolves: The Emerging American Police State and The Change Manifesto.