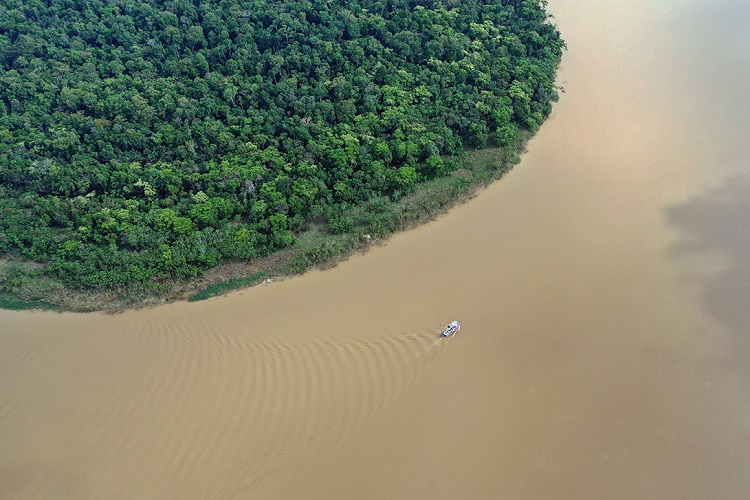 With outsider encroachment into indigenous reserves continuing to escalate in the Brazilian Amazon and the COVID-19 outbreak spreading rapidly throughout the country, indigenous people are increasingly vulnerable to both violence and infection. The threats are exacerbated by a reduction in environmental oversight by authorities due to social distancing restrictions imposed in response to the pandemic.

Indigenous leaders and advocates told Mongabay they fear the situation will get worsen in the coming months as loggers, land grabbers and illegal miners take advantage of the coronavirus chaos to accelerate their attacks on indigenous territories, emboldened by President Jair Bolsonaro’s rhetoric and reports of a drop in enforcement activities.

“These criminals won’t respect social distancing. Much the opposite: they will take advantage to be able to work more peacefully,” Antonio Oviedo, a monitoring coordinator at the Socio-Environmental Institute (ISA), an NGO that defends indigenous rights, told Mongabay.

In Rondônia state, the epicenter of last year’s Amazon fires, members of the Karipuna indigenous people have submitted a complaint to the local Federal Prosecutor’s Office (MPF), reporting non-indigenous people clearing forest inside their reserve, less than 10 kilometers (6 miles) from the village where the group lives. The document was also signed by Brazil’s Indigenous Missionary Council, which is affiliated with the Catholic Church, and Greenpeace.

“We are scared that one of these invaders will bring the virus inside our territory,” Adriano Karipuna, one of the group’s leaders, told Mongabay. “Bolsonaro has told these people that it’s just a little flu and that they can go back to work.”

Fear of the spread of COVID-19 by non-indigenous invaders inside Brazil’s indigenous communities has grown in recent days following reports of the hospitalization and death of an indigenous Yanomami teenager.

The Yanomami reserve in Roraima state is Brazil’s largest indigenous reserve and is overrun by tens of thousands of illegal goldminers. Indigenous leaders from the region say they suspect the current increase in illegal activity due to high gold prices and low local gasoline costs because of the epidemic.

Recent images published by BBC Brasil show illegal miners advancing on an area of the reserve populated by an isolated indigenous community.

In response to the outbreak, many indigenous groups across the country have blockaded villages and cancelled meetings and advocacy events.

Respiratory illnesses like COVID-19 can be especially deadly for indigenous people. Over the last 50 years in Brazil’s Amazon, thousands have perished from diseases brought by settlers.

Adriano Karipuna’s village was nearly wiped out during the 1970s by contagious illnesses after a disastrous contact policy instated by Brazil’s National Indigenous Agency (FUNAI), when the country was ruled by a military dictatorship that encouraged the colonization of Rondônia and other Amazonian states.

Today, the Karipuna number just 58, with several indigenous members more than 60 years old. Their reserve is constantly targeted by loggers and land grabbers who operate from the nearby cattle-ranching district of União Bandeirantes.

In that area, according to investigators heard by Mongabay, illegally logged timber is processed in unlicensed sawmills before being sold on with forged documents, mostly to Brazil’s industrialized southeast or abroad.

Tractors and diggers are stored on rural properties on the reserve’s edges to use during illegal incursions, while watchmen, positioned at strategic points or on motorbikes, use walkie-talkies to alert their accomplices if authorities arrive, investigators say.

“We’re scared that they take advantage of this time when we are vulnerable when authorities are in quarantine,” Adriano Karipuna said.

Last June, in an operation dubbed SOS Karipuna, authorities found illegally logged wood valued at an estimated 3.2 million reais ($627,000). They arrested nine people in connection with illegal logging and selling patches of land inside the reserve, and seized assets worth 46 million reais ($9 million).

Also in Rondônia, the local NGO Kanindé has warned authorities that the Uru-Eu-Wau-Wau indigenous reserve is at risk following the recent release from prison of two notorious local land grabbers.

The pair were arrested last year after being accused of leading an invasion of the vast indigenous reserve — which sits next to Pacaás Novos National Park and is also home to an unknown number of isolated indigenous groups — to deforest, occupy and illegally sell patches of land inside. They were released as part of the government’s pandemic response to prevent a potentially disastrous outbreak in the country’s overcrowded prisons.

A third leader, who is on the run, has also been spotted in the region. In an audio message heard by Mongabay, an unnamed official at the Chico Mendes Institute (ICMBio), the government’s environmental agency in charge of biodiversity conservation, said the group was planning to invade again.

In a statement, Rondônia’s Federal Prosecutor’s Office said it was aware of the risks, as were the federal police, and that they were keeping an eye on the situation.

FUNAI told Mongabay it was “aware of the threats of invasions” and “has been working on monitoring and inspection actions in partnership with governmental, environmental and public security bodies.”

On the other side of the Brazilian Amazon, in Maranhão state, an indigenous man, Antônio Filho Guajajara, was shot in the head and nearly killed on the Arariboia reserve, just days after local leader Zezico Guajajara was shot and killed nearby.

Zezico was the fifth Guajajara indigenous member to be murdered since November, in a conflict thought to be motivated by powerful logging mafias and landowners who dominate the region.

Last year, after Bolsonaro took office, Brazil’s Amazon saw the worst levels of deforestation in nearly a decade, with huge fires and a sharp increase in invasions of indigenous lands

The end of April, by which time Brazil’s health minister says the country’s health system will likely collapse, marks the onset of the dry season in the region, when deforestation typically begins to peak, before burning season in August.

Deforestation rates so far this year are already 51% higher than in the first quarter of 2019 — 796 square kilometers (307 square miles) compared to 526 km2 (203 mi2) in 2019, according to DETER, a real-time detection system from the Brazilian National Institute of Space Research (INPE).

According to Oviedo at ISA, loggers and land-grabbing gangs have adopted new strategies of invasion and deforestation.

“These days they are working all year round including in the rainy season,” he said. “Then when the rain stops for a few days and the ground dries a bit, they call in the trucks to remove the wood.”

He said loggers enter the area with motorbikes making smaller entrances so that the canopy of taller trees makes the logging more difficult to detect on satellite images.

Reports of a drop in environmental enforcement activities due to the pandemic have also raised concern that illegal extraction gangs will take advantage.

In a recent interview with Reuters, Olivaldi Azevedo, the director of environmental protection with Brazil’s environmental agency, IBAMA, said his office would be forced to scale back operations.

“There’s no way you can take these people who are at risk and expose them to the virus,” he said. “There is no choice between one thing and the other. It’s an obligation.” He added the Amazon would not be affected by the curtailing of enforcement operations.

Marcio Astrini, executive secretary of the Climate Observatory, a group of NGOs, said that in the past a drop in enforcement and surveillance missions was almost always accompanied by a spike in deforestation.

Recent video of an IBAMA operation against an illegal mining site on the Aptereua indigenous reserve in Pará state, which culminated with the destruction of two diggers, was widely shared on social media and denounced on Whatsapp groups of illegal miners as “terrorism.”

Also in Pará state, local experts have expressed concern about the Ituna Itatá reserve, which is home to an unknown number of isolated indigenous peoples and has been devastated by land grabbers, following the construction of the nearby Belo Monte hydropower dam.

In February, Edward Luz, an anthropologist supportive of Bolsonaro, was arrested there during an IBAMA operation.

“IBAMA are here for now, in the area, so the criminal groups in the region are less active,” said a source familiar with the case who asked to remain anonymous. “But it’ll be a huge problem if they leave.