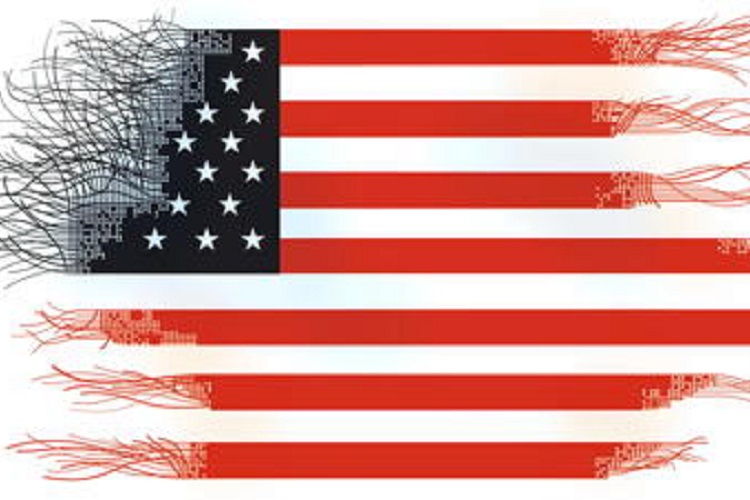 They may just opt out of the whole insane charade and stop paying the mountains of debt and stop trying to prop up the deranging pretense of middle-class snobbery.

Though many blame Donald Trump for dividing the nation, the nation was already disunited. Trump’s election simply added day-glo paint to the lines that had long been hardening between disunited, disaffected camps.

When challenges arise–and challenges always arise–the unified family, enterprise, nation or empire can make the shared sacrifices necessary to meet the crisis head-on, and not just survive, but as befits an anti-fragile system (as per Nassim Taleb’s definition of anti-fragility), become stronger as a result of adapting to the crisis.

The family, enterprise, nation or empire fragmented by profound disunity is incapable of not just shared sacrifices but of a shared consensus on how to proceed against challenges such as famine, pandemic and economic depression.

It is the nature of human existence that shared sacrifice is the glue that binds disparate individuals and groups into a unified and thus powerful entity. In the early days of the Roman Republic and Empire, the wealthiest citizens were taxed heavily to raise the money needed to defend Rome or prosecute wars of conquest.

The patrician class served as officers in the army, and it was their duty to serve in the front lines, and in some cases (such as the horrendous defeat at Cannae) suffer higher combat death rates that common soldiers.

Profound disunity is characterized by the recognition that favored elites make no sacrifices, and this injustice consumes the binds of civil unity. The elites benefit the most from the system, piling up enormous fortunes and great political power, while the disempowered masses make the sacrifices on the battlefield and pay the taxes.

This disunity is not only political; it is social, economic and cultural as the elites’ wealth soars in direct correlation to their unwillingness to make any sacrifices for the common good.

Grasping for power via philanthro-capitalist foundations is not a sacrifice; it’s just a PR spin on the same old elitist accumulation of self-serving influence.

Though the mechanics are obscured by the financial games of central banks and financiers, the commoners understand that the nation’s elites are parasitic and predatory, rigging the financial and political systems to benefit themselves at the expense of the nation and its citizenry.

Though it’s convenient to divide America into two camps, anti-Trump and pro-Trump, these camps are each fragmented into disparate interests. There is no middle ground in the nation and none within the various warring camps.

As the Federal Reserve gooses the stock market to new heights, America’s billionaires add hundreds of billions in additional wealth to their already obscene piles–piles largely untouched by taxes. In America, sacrifice has long been something demanded of the commoners: they fight the wars, they pay the taxes, they do the work and they sacrifice their health in jobs that only further enrich the few who reap all the gains while sacrificing nothing.

As for the commoners–they’ve been fragmented for decades into warring camps, fighting over social mores, political theater and all the frustrations of the powerless: embittered by the erosion of security and fairness and the indignities of slaving away for corporations that enrich the few while impoverishing the many, exhausted by the insecurities of chronic under-employment and the exploitations of the gig economy, the commoners may eventually find common cause in overthrowing their exploitive elites.

Or they may just opt out of the whole insane charade and stop paying the mountains of debt and stop trying to prop up the deranging pretense of middle-class snobbery in favor of an honest, low-cost mode of living that dispenses with servitude to self-serving, greedy elites and their corporate-plantation technocrat overlords.

Asking this is like asking, could the Western Roman Empire fall? Yes, it could, yes it did. Based on the nation’s multiple sources of profound disunity, collapse is only a matter of when, not if.

If you found value in this content, please join me in seeking solutions by becoming a $1/month patron of my work via patreon.com.