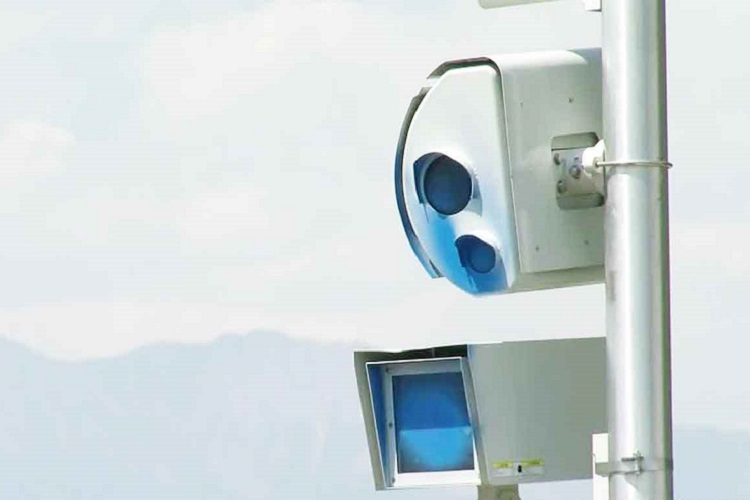 Colorado Springs, CO — Take away the political corruption, bribery scandals, increased accidents, and police state issues with Red Light Cameras and we are still left with a system that is rooted in the removal of due process. The good news is that after the corporatist red light camera industry spread through the nation like a cancer for more than a decade, people are finally beginning to realize their inherently despotic nature.

As a result, people have been fighting back. In Colorado Springs, a Red Light Bandit has infuriated police and government revenue generators by painting over the cameras all across the city.

In April of last year, as cities across the country were ending their Red Light profiteering scams, Colorado Springs began theirs. Since then, they have continued to increase the number of cameras on a regular basis, driving some folks to retaliate.

Over the weekend, several drivers took pictures of vandalism and various intersections, including Platte and Chelton that historically has the most run red lights in the city.

Colorado Springs police say they’re looking into the issue, but didn’t have other information readily available. Lieutenant Steve Noblitt told KRDO over the phone the department hopes the perpetrator was caught on camera during the incident. He says the cameras are always recording, and could have captured when they were spray-painted.

According to the report, a total of four intersections were all vandalized sometime over the weekend.

The third party company who partnered with the government to extort citizens, Verra Mobility, claimed that it is going to cost over $30,000 for their single employee to remove the paint from the cameras. We highly doubt that it will cost even 1 percent of that, which goes to show just how corrupt these companies are.

If you are one of those people who couldn’t care less about the removal of due process, perhaps the sheer corruption of these companies would be enough to deter your support.

After being found guilty of bribing politicians to implement her due process-removing products, Karen Finley, former CEO of the red light company Redflex, was sentenced to 14 months in prison. Her crimes spanned across multiple states and are so extensive that she is still facing future trials.

Ruth has recently become targeted by local politicians in his community who are ‘addicted’ to the funds from these red light cameras.

Unwilling to sacrifice innocent lives for millions of dollars in gross revenue, just like the person in Colorado Springs, this nonviolent vigilante admittedly sabotaged traffic cameras in order to call attention to drastically shortened yellow lights endangering lives in his community. As a result he faced arrest, threats, break-ins, and more.

While Ruth is not a politician, his sentiment toward unconstitutional red light cameras represents a growing resistance in this country — just as the case in Colorado Springs illustrates. As with any tyrannical or fascist regime, these private red light camera companies rely on your compliance for their very existence.

As more people refuse to comply, these companies, who rely on corrupt and greedy politicians willing to sell out their citizens for a buck, will begin to fail. And, when they lose — freedom wins.

As the Newspaper reported, a group of three lawyers had filed suit in 2013, arguing that New Miami, Ohio’s automated ticketing ordinance gave vehicle owners no realistic opportunity to defend themselves against the demand for a payment of up to $180 that arrived in the mail. Optotraffic, a private vendor, sent the tickets to motorists passing through the less-than-one-square-mile town on US 127, a major highway that links Cincinnati with points north.

During that period of Optotraffic extortion, the city robbed drivers of $3,066,523.00. After Butler County Court of Common Pleas Judge Michael A. Oster Jr.’s ruling, the city was forced to pay back all of it in 2017.

On top of the unconstitutional nature of Red Light Cameras is the safety factor. These companies and the corrupt and greedy politicians who accept them know that they are about revenue generation — not safety — as these cameras increase the likelihood of an accident or death.

In February, TFTP talked to Stephen Ruth, who, as mentioned above, risked his very freedom to expose this madness..

Ruth was arrested and was facing years in prison for exposing the deaths of several people, including children who were killed as a result of these shortened yellow lights, through disabling the cameras.

In May 2015, sixteen-year-old John Luke was killed crossing the street when an SUV hit him. Less than a year later, a 64-year-old legally blind man named Warren Karstendick was killed in a hit-and-run when an SUV struck him. After visiting the scenes of their deaths and several others, Ruth concluded that these innocent pedestrians were losing their lives due to cars speeding up to avoid red light tickets.

Although the New York City’s Department of Transportation claims that all of its traffic signals provide a minimum of three seconds per yellow light, the AAA of New York released a 2012 report that found every tested traffic camera had a yellow light shorter than three seconds. Despite the fact that governments claim red light cameras are solely used to prevent accidents while modifying driver behavior, the revenue generated from traffic cameras can grow exponentially if yellow lights are shortened. As a result of the government’s greed for red light revenue, the safety of the driver took second priority.