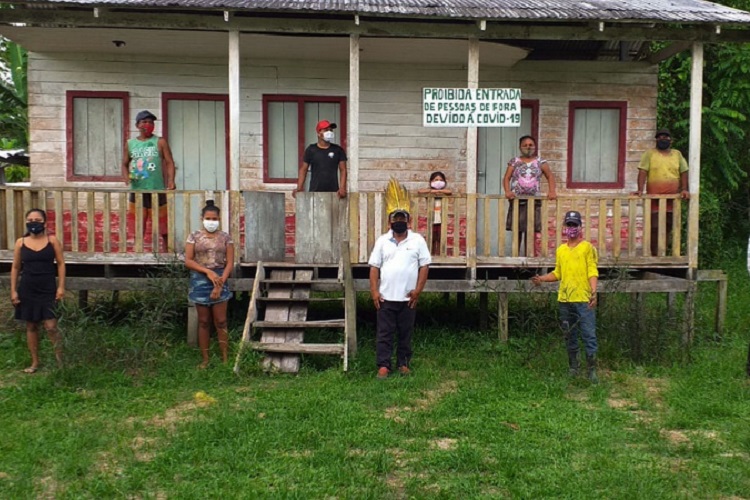 TABATINGA, Brazil — Since mid-May, a multidisciplinary health team formed by members of the Kokama Indigenous group has been visiting community homes in Brazil’s upper Solimões River region to monitor for symptoms of coronavirus. Whenever they find potentially infected Kokamas, they warn the local shamans. The patients are then prescribed treatment consisting of rituals using ayahuasca, the sacred forest brew used for millennia in healing ceremonies.

“At first, we relied on the medicine of non-Indigenous people, but our people went to the hospital and left there in a coffin,” says Edney Samias, chief of the Kokama people. “Now, everyone with coronavirus symptoms is treated at home, only with ayahuasca and other traditional medicines. Now we are saving many lives.”

The first confirmed case of COVID-19 infection among Brazil’s Indigenous peoples came from the Kokama community. The infection was confirmed on March 31 in the district of Santo Antônio do Içá, in Amazonas province, after a 20-year-old Indigenous health agent had contact with a doctor from the government’s Special Secretariat of Indigenous Health (SESAI) who had returned from vacation without quarantining.

Since then, the virus has spread rapidly among the Kokama, leaving a death toll of 60 and more than 1,000 people infected throughout Amazonas as of the end of July.

Chief Samias lost 17 direct relatives to the disease, but it was the death of his father, community leader Guilherme Padilha Samias, on May 14, that changed how the community treated those with COVID-19 symptoms.

Their confidence in Western medicine collapsed as a result of the series of deaths and the prejudice that the Kokama say they suffered at the Tabatinga military hospital, including negligence in the way they were treated.

Since then, the Kokama have abided by an internal decision to no longer seek out public health units in case of community cases with COVID-19 symptoms. They have instead turned to traditional medicine and indigenous knowledge to treat the disease, replacing doctors with shamans and Western medicine with ayahuasca, ginger, garlic and lemon. “White man’s medicine killed our people,” Samias says.

He says the ayahuasca treatment to fight COVID-19 has already been offered to more than 800 Indigenous community members in Tabatinga, a municipality on Brazil’s border with Peru and Colombia, and home to around 5,500 Kokama. Because they live in the city and are considered non-villagers, they are not included in SESAI’s statistics.

Of the 60 deaths recorded among the Kokama, 56 occurred between mid-April and mid-June. The four other deaths were reported in the more than six weeks since then. The reduction in the death rate, even with the large number of patients being treated at home, is the result they say they expected when they shunned the hospitals in favor of their traditional medicines combined with hygiene practices and social distancing.

For Glades Kokama, president of the Kukami-Kukamiria Indigenous People’s Federation of Brazil, Peru and Colombia, Western medicine has not worked for them “because the resources and medicines come all too late” and discourages the community. “In the past, people survived without laboratory medicine. We will vouch for what’s ours and maintain our millenary culture. I hope that everyone within traditional medicine will respect us because, if not for us, we don’t know what it will be,” she says.

There are no scientific studies to date proving the effectiveness of ayahuasca in fighting the coronavirus. However, there is evidence of the drink’s therapeutic potential as an auxiliary treatment for psychological disorders and diseases such as cancer.

Ayahuasca is made from a combination of two plants: the jagube vine (Banisteriopsis caapi) and the chacrona bush (Psychotria viridis). The rituals with the sacred brew take place three times a week during the night and can last until dawn. They are performed in a dedicated space and are guided by a group of shamans. The oldest of them is now 105 years old and, according to community members interviewed for this story, he did not present any symptoms of the disease. In specific cases, the ceremony can take place at the patient’s home.

“In rituals, we make the sick person’s body connect with the mururé tree [Brosimum acutifolium] through singing,” says Edney Samias, referring to an Amazonian tree known for its many medicinal properties. “But when there are several patients at once, we gather up to eight people taking ayahuasca to strengthen their souls.”

The ayahuasca ritual is considered by the Kokama as the most powerful cure, and it is a moment of experience, discovery, visions of the future and the past, and learning about traditions. It is a secret ceremony, with all the secrets transmitted directly from master to disciple.

“My family has always taken ayahuasca, but before the disease came I stopped for three months. I got scared and thought it was better to reach out to white men because they have respirators, medicines, doctors, and could cure. And I forgot that I could cure my family myself,” Samias says. “I regret it. I shouldn’t have believed in the white man’s medicine, nor should I have taken anyone to the hospital.”

According to Glades, the homemade medicine and home treatment have helped her people survive. “Contamination spreads more easily in the hospital. With our own medicine we stay at home. Ancestral medicine is the essence of the cure for us. We can’t wait for a doctor,” she says.

She adds that now is the time to encourage community members to begin cultivating “healing gardens” with medicinal plants like those used to make ayahuasca. “We’re going to teach because there’s a right way to grow and work ayahuasca plants, it’s not random,” Glades says. “Now it’s time to strengthen [the traditions].”