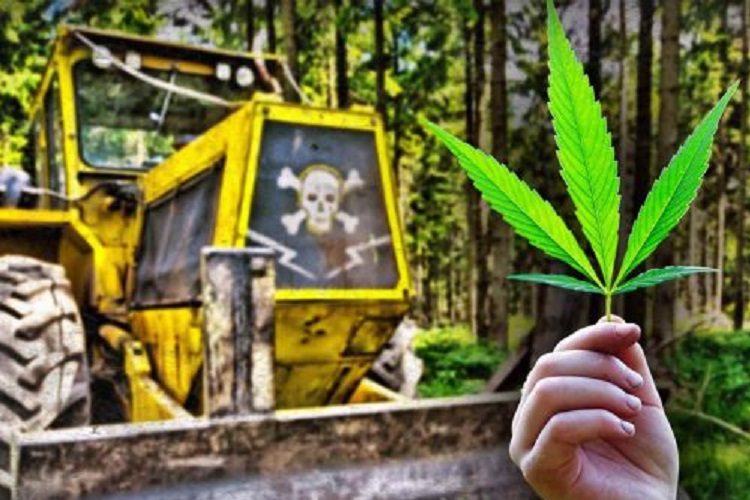 Because government is the antithesis to freedom, industrial hemp has been banned nationwide since 1937 ostensibly due to the plant’s similarities to marijuana. Many have speculated that this move was also due to the fact that cannabis is in direct competition with the pharmaceutical industry by providing far safer alternative treatments as well as directly competing with the petrochemical industry. However, all this changed in December 2018 after President Donald Trump signed the Agriculture Improvement act of 2018, legalizing industrial hemp on a national scale.

In spite of knowingly forging a name for themselves on the wrong side of history by prosecuting innocent farmers, tyrants in the enforcement class wage on. A struggling farmer in South Carolina just learned this the hard way when dozens of cops raided his farm and bulldozed his entire hemp crop, he says was worth several million dollars.

After hemp was legalized with the farm bill, John Pendarvis got to work plowing it into his fields last year. Unfortunately, his crop was in the path of hurricane Dorian last year and took a massive hit. The plants were flattened and the land was flooded so he was then forced to use land that wasn’t officially permitted for hemp by the state agriculture department.

According to WaPo, he called the agency to ask whether he should hire a crew to manually prop up the 25,000 plants. “They said, ‘Keep doing what you’re doing,’ ” he remembers. Days later a platoon of militarized police showed up and raided his farm, handcuffing and arresting him for illegal hemp cultivation on his own property. These hero public servants then bulldozed his crop.

“It must have been 30 of them coming from everywhere,” Pendarvis said. “Now it’s just all rotted up.”

Pendarvis first ran into trouble after raising a first round of seedlings in a greenhouse in May and realizing that the water supply for his permitted field was insufficient. With a limited planting window, he utilized an adjacent field and another two acres in a field owned by a colleague 100 miles north.

He says he called the state agriculture department and was told to submit an amendment form. According to agency spokeswoman Eva Moore, he did not complete the form until after officials inspected his property. Weeks before the hurricane hit, they reported him to the law enforcement division that handles state-level drug crimes for willfully planting on an unpermitted field.

His attorney, state Sen. Brad Hutto (D), contends that Pendarvis was treated like a drug trafficker by the officers who showed up and that his crop was destroyed despite the South Carolina attorney general saying judicial review should first be sought in such cases. Citing pending litigation, the South Carolina Law Enforcement Division declined to comment on the case or its execution of hemp law.

Because cops still kidnap, cage, or even kill people for marijuana and because marijuana smells like hemp, the state is still very addicted to eradicating the plant and people who dare grow it without flawlessly jumping through every single hoop. For this reason, states across the country have moved to ban the consumption of the hemp flower and only allow the oils and subsequent health products. Otherwise, officer ‘weed hater’ wouldn’t be able distinguish between someone smoking entirely legal hemp, or its cousin, the devil’s lettuce.

South Carolina is making a name for itself when it comes to tyrannical hemp enforcement. Earlier this month, police in South Carolina seized a 183-pound shipment of hemp they thought was marijuana. Despite the paperwork clearly showing it was hemp, Wellford’s police chief, David Green stands by his decision to seize the product, going so far as to give out his cell phone number saying, “I will talk to any one who questions what we did and why.”

In New York, TFTP has reported on similar tyranny in which a company’s legal hemp was seized by cops who then took to social media to brag about it. It took the company several months and an intense legal battle to finally get back their product that was stolen from them by people claiming to ‘protect us.’

This is the state of the land of the free. Citizens cannot even grow a plant which our forefathers cultivated for a century because government claims the authority to kidnap and cage people who use the psychoactive version of that same plant. Freedom!