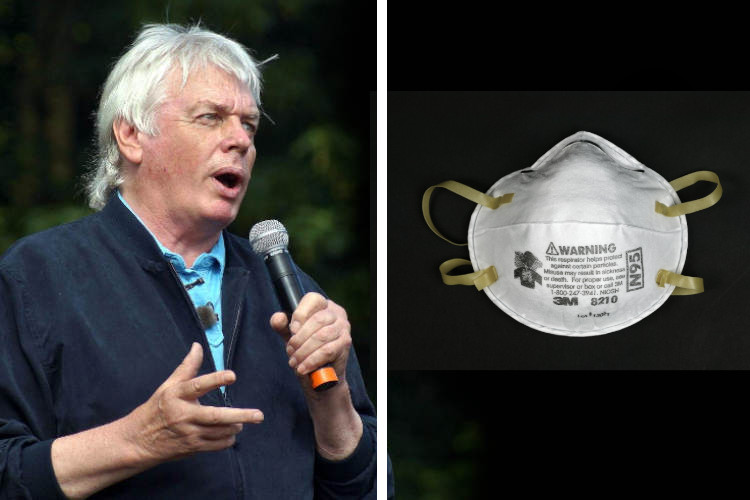 Let’s be honest with ourselves for a bit. Why are we really wearing face masks?

In a recently released video, banned and censored David Icke breaks down the face mask phenomenon, comparing it to a religion, which is a belief system requiring blind faith. But people are wearing these everywhere. Are they all believers?

Icke articulates the three real reasons why people are wearing these face coverings.

“The first could be that you are a statist. You believe that state representatives, government officials, know more about reality than you do. You trust them to tell you what to do. You accept their claim that they have special knowledge and have your best interests, and those of your fellow citizens at heart. You gave them your authority to control your life, and the lives of everyone else.”

‘The second reason, one shared by many statists and anarchists alike, is that you are forced to do as you are told. With a monopoly on the use of force, the State is the only body in society that can initiate force and get away with it. While nearly everyone in the UK would say it is morally indefensible to use physical force to make someone do whatever you tell them, it is surprising how many think it’s OK for a tiny group in Westminster to use physical force, or the threat of it, to control millions. Cognitive dissonance exemplified. None-the-less it is what it is. If you need to take the bus or the train to work, you are now forced to wear a face mask. Not because you believe there’s any point in it, but because you won’t be able to get to work and feed your family otherwise.”

So, if we are honest with ourselves, we will wear a face mask on public transport for two reasons. We are either happy to accept that special people we’ve never met have sole authority to tell us what to do, as a slave owner would command his slave. Or we are scared that they will use force to punish or harm us if we don’t comply. We call this a free and open, democratic state.”

“The final reason you might elect to wear a face mask is that you are convinced by the scientific evidence. You believe that donning a cheap or homemade face mask will protect you and others from a disease which you have a 0.4-5% chance of contracting and a 99.94% chance of surviving.”

So, the reason that people are wearing face masks is the reason that a few control the world. They either A, believe what they’re told without question. The great majority. Or the they fear the consequences of not conforming to what they have perceived as a waste of time and complete nonsense, or even gone as far as to perceive it for what it is, as a psychological operation against the human psyche.”

Now that we are being honest, are you catching on to where this is all going? If the state can mandate a person to cover their face under threat of being shut out of work or even grocery shopping, what’s next?

This article (David Icke Explains the 3 Reasons Why People Wear Face Masks) was originally created and published by Waking Times and is published here under a Creative Commons license with attribution to Vic Bishop and WakingTimes.com. It may be re-posted freely with proper attribution, author bio and internal links.