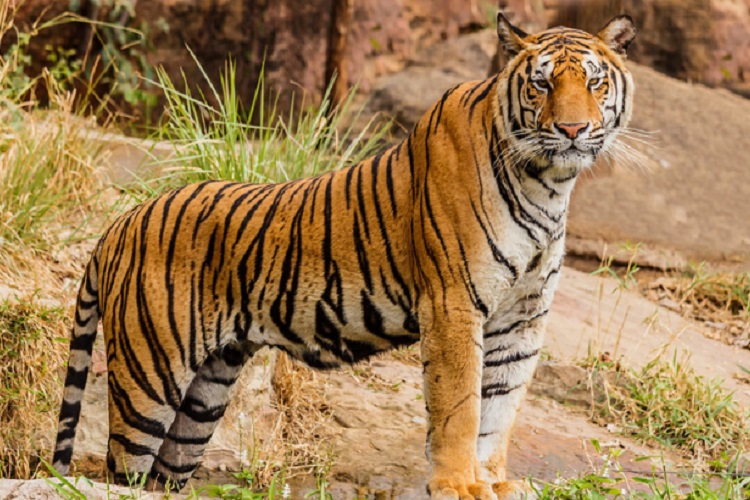 Some twenty years ago, photographer Aditya Singh resigned from his job in civil services in Delhi and moved to the city of Sawai Madhopur in Rajasthan with his wife and artist Poonam so they could be closer to nature. It was there that they started a tourist resort to earn a living.

Over the years, the couple bought about 35 acres bordering the Ranthambore Tiger Reserve on one side. Farmers were selling their land because of predators, including tigers, in the area.

The area, called Bhadlav was barren and had little vegetation but has since been transformed into a lush green forest frequented by wild animals, including tigers.

After settling in Ranthambore, Aditya first visited the Bhadlav area with a BBC filmmaker and became aware that the farmers were selling their land because of the risk of predators searching for prey.

‘’As a result, farmers were selling their land,” Singh told Mongabay India. ‘’I just bought this and did nothing to it except removing the invasive species. We allowed the land to recover and now after 20 years it has become a lush green patch of forest which is frequently visited by all kind of animals, including tigers, leopards and wild boars.’’

For Poonam it was love at first sight when she visited Ranthambore with her husband. “My first sighting was a tigress with three cubs on a hill. It was magical. At the end of the trip, I just asked him if we can move to Ranthambore. He wanted it too and within months we moved. As far as this land is concerned, it was a dream that we both saw an achieved together to have our own area of wilderness,” she told Mongabay-India.

Poonam managed the tourist resort with Aditya for twenty years and closed it in 2019.

An aerial photograph of their land shows the stark contrast between their lush green forest and the barren land surrounding them, including the Ranthambore Tiger Reserve, with whom they share a boundary.

Not only did the couple have the patience to let the natural habitat renew itself, they also created several water holes to ensure the wild animals have enough drinking water even during the hot summers.

Because of the Singh’s efforts, the threat to the farmers in the area has drastically reduced as the tigers from the Reserve prefer the forest. ‘’It is simply because the animals understand that in this patch of the forest they get prey, water and safe shelter without any disturbance,’’ Aditya explained.

Aditya and Poonam’s story has inspired others in the area to follow their example. Aditya has also been receiving inquiries from people across India who want rehabilitate their land and create a comparable model in their own states.

May Aditya and Poonam’s success, achieved through their love for nature and dedication to their project, be the first link in a strong chain of like-minded people in India, and indeed the world, transforming the barren areas on our planet back to its natural state for the sake of wildlife and humanity.