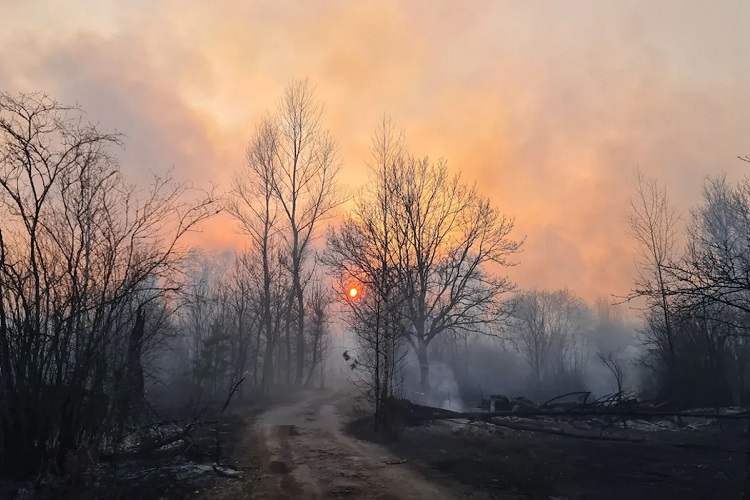 Firefighters are battling to contain larger-than-usual wildfires in the Chernobyl exclusion zone as radiation levels spike at their center.

The fires, which started April 3 in the west of the zone, then spread to forests in the area with higher radiation levels, Reuters reported. High winds Saturday risked pushing the blaze towards the abandoned plant and equipment used to clean up the 1986 Chernobyl nuclear disaster, acting leader of the agency that manages the area Kateryna Pavlova told The New York Times.

“We have been working all night digging firebreaks around the plant to protect it from fire,” Pavlova said.

The wind had been blowing the smoke towards rural parts of Russia and Belarus most of the week, but shifted Friday towards the Ukranian capital of Kyiv, home to around three million people. However, authorities said the radiation levels in the city remained normal. Contaminated smoke was expected to reach Kyiv over the weekend, but authorities said radiation levels in the air once the smoke had dispersed would be safe.

The risk posed by the fires is that people might inhale radioactive particles with the smoke.

“Wind can raise hot particles in the air together with the ash and blow it toward populated areas,” air pollution expert with environmental group Ecodiya Olena Miskun told The New York Times.

However, Ukraine is currently on lockdown to prevent the spread of the new coronavirus, and Miskun said this was an unexpected blessing.

“We are lucky to have quarantine measures in place now,” she said. “People stay at home, walk less and wear masks.”

The explosion of the Chernobyl nuclear power station in April 1986 was the worst nuclear accident in history, Reuters explained. Afterwards, people were evacuated from a 19-mile exclusion zone around the plant that is tightly controlled to this day.

Wildfires are common in the exclusion zone, but these are unusually large and follow a warm, dry winter, The New York Times reported. As of Saturday, they had consumed more than 8,600 acres and required the work of around 400 firefighters, 100 fire engines and several helicopters.

“At the moment, we cannot say the fire is contained,” Pavlova told The New York Times.

The climate crisis is increasing wildfire risk in the area, Gizmodo pointed out, as it raises temperatures and ups the chance of drought. A 2014 paper published in Environmental International said the region saw around 54 fires in the contaminated area in 2010 and 300 elsewhere, and warned that future fires that covered 10 to 100 percent of the contaminated zone could send “significant amounts” of radiation to communities in Eastern and Central Europe.