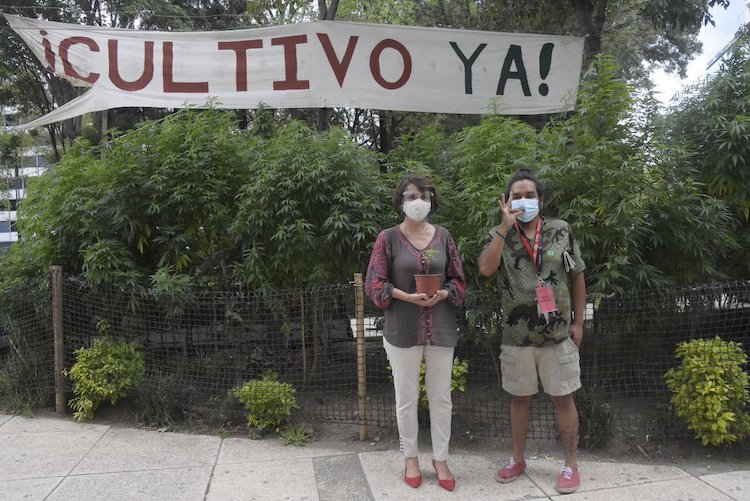 Mexican cannabis activists have reportedly planted around 1,000 fragrant marijuana plants in a garden outside the Mexico Senate building in an effort to remind lawmakers of the harmlessness of the medicinal plant.

“We started by planting one single plant on one of the capitol’s main streets on December 23, 2019,” said protest organizer Pepe Rivera. “Every time officials ripped out a plant, they would plant two more in its place,” reports High Times.

“This exponential strategy worked, and by Three King’s Day, four plants were firmly established in the ground. On February 2 of this year, the garden grew to 32 plants. That’s when they decided to plant in front of the main entrance to the Senate, with the garden growing to more than 700 plants today.”

Organizers want to make it clear that cannabis is just as safe as any other plant. A 2018 Mexican Supreme Court ruling argued that prohibition, “violates the right to freely develop one’s personality,” forcing legislators into an upcoming vote on the future of Mexican marijuana laws.

“They’re not thinking about users; they’re thinking about the industry,” said Rivera, who advocates for legislation allowing more individual freedom. “It’s basically revitalizing prohibition for the poor but carving out a legal market for big businesses.”

The 2018 Supreme Court ruling already decriminalized marijuana for recreational use in small quantities, stating that, “the effects provoked by marijuana do not justify an absolute prohibition of its consumption.”

“Under current law five grams of cannabis are allowed and that’s an unacceptable and unreasonable amount,” said Rivera. “Even though Mexico uses the metric system, the cannabis market still operates through ounces, for example, one quarter ounce is seven grams.”

Mexican marijuana advocates argue that police frequently plant higher amounts on citizens to force them to pay bribes. In Mexico, police officers are payed an average salary of only $1,600 and are required to maintain their own vehicles.

Although the pandemic has pushed back three legislative deadlines, the Senate is set to vote on a new bill December 15th of this year, amid wafts of marijuana aroma from outside.

The four demands of the Mexican Cannabis Movement (MCM) are:

Anywhere from 500 to one thousand cannabis users reportedly visited the protest site each week prior to coronavirus lockdowns.

“The lack of compromise by Mexican legislators has fueled civil disobedience at its best,” says Rivera. “Mexican activists are partaking openly and planting the country’s capital with cannabis in protest.”

Ending cannabis prohibition would free up Mexican police to go after more serious crimes, such as human trafficking, which is a major human rights issue in Mexico, especially along the Northern border.

“A survey of 821 federal prisoners by the Center for Economic Research and Teaching found that nearly 50% of inmates had been sentenced for drug crimes,” reports Yahoo Finance. “Almost 60% were incarcerated for marijuana possession… [40%] had been arrested for possession of illicit substances they said were worth less than $25.”

“It’s time for the powers that be to listen to the people. If they don’t, we’ll drag the new law into court for discrimination. This is about human rights and a beneficial plant that is helping thousands around the world right now. The hope of the Mexican Cannabis Movement is to change the narrative of the global failed Drug War into one where language promotes and protects the human rights of users.” – Pepe Rivera

This article (Cannabis Activists Cultivate 700 Marijuana Plants Outside Mexican Senate Building) as originally created and published by Waking Times and is published here under a Creative Commons license with attribution to Phillip Schneider and WakingTimes.com. It may be re-posted freely with proper attribution, author bio, and this copyright statement.