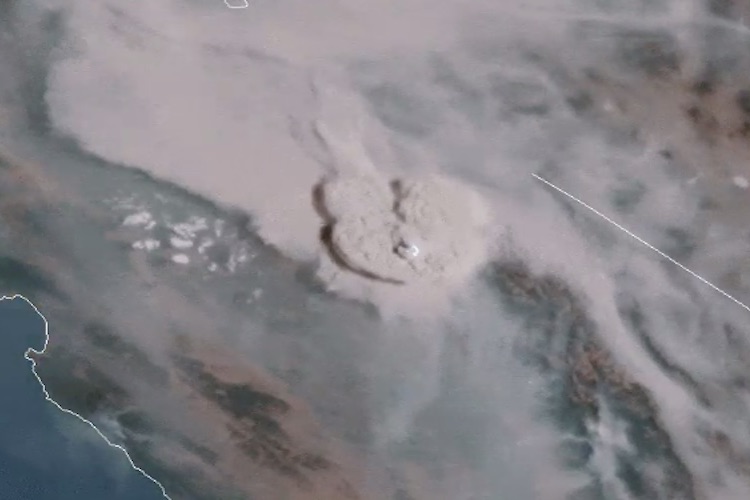 As a record-shattering heatwave supercharges extreme fire conditions in California, the most terrifying of the multiple fires ravaging the Golden State has spawned a massive “fire cloud” visible from space.

Well over 2 million acres of land have gone up in flames across California, devouring forest land and consuming homes. The worst among the fires is the Creek Fire in the Sierra National Forest in Central California, near Fresno, which has grown into a “raging monster” after exploding on Friday.

Since beginning Friday, the Creek Fire has already consumed nearly 145 thousand acres, or 212 square miles, as of Tuesday morning, according to Cal Fire.

Intense heat from the 73,278-acre Big Creek fire near Fresno, California has produced not just smoke, but something called a pyrocumulonimbus cloud, which resembles the aftermath of an atomic explosion [read more, with credits to the pictures: https://t.co/PxUKhH9aou] pic.twitter.com/xEt4Yjb2LF

The fire has doubled in size since Monday, and the fire has zero percent containment. Authorities have warned that they won’t have the Creek Fire fully contained until Oct. 15, 2020.

As the fast-moving fire likely spawned fire tornadoes during its expansion, a (literally) breath-taking “fire cloud” or pyrocumulonimbus has also been detected from space by a National Oceanic and Atmospheric Administration (NOAA) satellite.

“@NOAA’s #GOES17 has been monitoring California’s #CreekFire, which grew explosively today after igniting in the Sierra National Forest on Friday,” NOAA’s public affairs office wrote on Twitter on Sunday (Sept. 6). “In this loop, you can see the fire’s extraordinary #Pyrocumulonimbus cloud, which reached an estimated 45,000+ ft [14,000 meters, or about 8.5 miles] high.”

UPDATE: @NOAA's #GOES17🛰️ has been monitoring California's #CreekFire, which grew explosively today after igniting in the Sierra National Forest on Friday. In this loop, you can see the fire's extraordinary #Pyrocumulonimbus cloud, which reached an estimated 45,000+ ft high. pic.twitter.com/pcWwnrA2zs

NASA refers to pyrocumulonimbus as “the fire breathing dragon of clouds,” and notes that they are created when wind, rain, smoke and fire mix over thousands of burning acres. These thunder clouds are triggered by the heat and moisture kicked into the atmosphere by fires, and the fire clouds also send massive amounts of pollutants into the upper atmosphere.

On the ground, the U.S. military have stepped into assist California’s strained fire services. On Tuesday, aircraft of the U.S. Navy and California Army National Guard helped rescue 35 people.

The Fresno Bee reports that a Blackhawk rescued 13 from China Peak and brought them to Yosemite International Airport. The Navy also airlifted 11 people from the fire zone to Lemoore Naval Air Station, while another National Guard helicopter flew back from Lake Edison with 11 people.

There have been two urgent rescues carried out since the Creek Fire ignited on Friday, with 214 people being rescued by helicopter after they were trapped at the Mammoth Pool Reservoir in Madera County.

“There’s fire on all sides, all around us.” Absolutely terrifying video from Mammoth Pools where 200+ people were trapped when the Creek Fire exploded pic.twitter.com/xDb8huwWKe

Tens of thousands of people have been evacuated from Madera and Fresno counties, while over 60 structures have been destroyed by the inferno-like blaze.

“This is an unprecedented disaster for Fresno County,” Fresno County Sheriff’s Office Lt. Brandon Pursell said Monday. “This is one of the largest and most dangerous fires in the history of Fresno County. I don’t think everyone understands that. Playing that game of ‘how long can I wait’ is just foolish.”

The unsparing heat wave in parts of California has been accompanied by 22 large fires. Over the weekend, temperatures in the Los Angeles metropolitan region climbed past 121F (49.4C)

Worsening matters significantly, wind gusts of about 50 mph are expected in elevated parts of Northern California.

Meanwhile, Southern California residents are being told to urgently prepare for strong Santa Ana winds that are arriving Tuesday and are sure to spread the Bobcat Fire burning in the Angeles National Forest. The cities of Duarte and Monrovia face the strongest danger but Azusa, Bradbury, Arcadia and Sierra Madre could also be threatened, officials warn.

Today I was flying from San Jose to Las Vegas on SWA & I looked out my window & I saw this cloud. I l found out that it is a cumulonimbus flammagenitus cloud aka pyrocumulonimbus cloud, a type of cloud that forms above a source of heat, such as a wildfire #CreekFire pic.twitter.com/HCqyWiHpNx