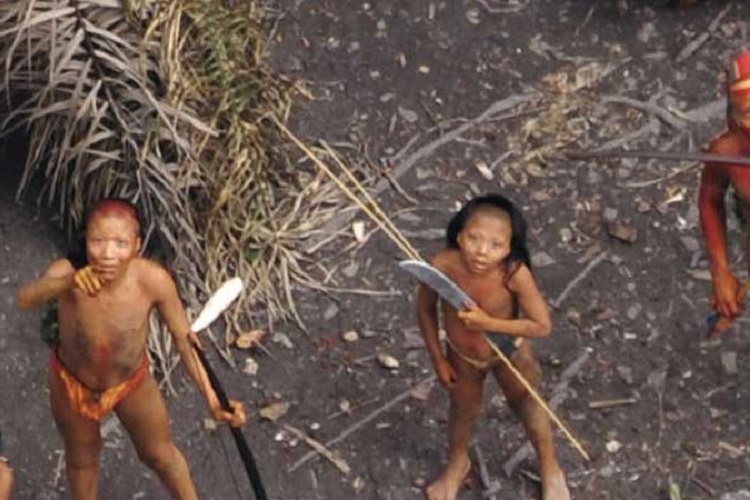 This week, President Jair Bolsonaro pressed forward with a “dream” initiative sending a bill to the Brazilian Congress that would open indigenous reserves in the Amazon and elsewhere to development, including commercial mining, oil and gas exploration, cattle ranching and agribusiness, new hydroelectric dam projects, and tourism — projects that have been legally blocked under the country’s 1988 Constitution.

Justifying the legislation, Bolsonaro explained that “The Indian is a human being exactly like us. They have hearts, feelings, a soul, desires, needs and they are just as Brazilian as we are,” so they will welcome economic exploitation inside their territories. Bolsonaro and the bancada ruralista agribusiness and mining lobby, which is very strong in Congress, have eyed the off-limits indigenous lands for decades. Indigenous territories have the best record for forest conservation and land stewardship in Brazil.

Marcio Santilli, a former head of FUNAI, Brazil’s indigenous affairs agency, sees Bolsonaro’s “dream” legislation very differently. It will “not promote the economic development of the Indians, but guarantee the exploitation by third parties of their natural resources. It would encourage Indians to live from royalties while watching the dispossession of their lands.”

While the legislation would allow impacted indigenous populations to be consulted, they would lack the power of veto, except in cases of garimpo or wildcat mining. The right of consultation on development projects is assured under the International Labour Organization Convention 169, of which Brazil is a signatory.

Though the bancada ruralista is strong in Congress, it remains to be seen whether the bill will gain passage. House of Deputies leader Rodrigo Maia has said he will not bring the legislation to a vote.

Conservationists are convinced that the opening up of indigenous lands to economic exploitation would inevitably lead to extensive deforestation of what are the most densely forested areas of the Amazon, and to the contamination of Amazonian rivers. That sort of wholesale deforestation could lead to far greater Amazon drought and to a rainforest-to-savanna tipping point that would greatly endanger Brazilian agribusiness as a driver of Brazil’s economy.

Onyx Lorenzoni, Bolsonaro’s chief of staff, praised the bill, claiming it was a “Lei Aurea” for indigenous people — a reference to the 1888 royal decree which freed the slaves in Brazil. From the government’s point of view, the legislation is freeing indigenous people, allowing their lands to be invaded by mining, oil and gas companies; cattle ranchers; soy farmers and dam builders, while compensating indigenous communities monetarily.

Under the Brazilian constitution, demarcated indigenous territories belong to the state, and are for the permanent possession and exclusive use of the indigenous people who have always lived there. Only they can decide what activities are allowed on their lands.

Bolsonaro’s new law is therefore an attempt to override the Constitution, say legal experts. It is almost certain to be greatly modified in Congress, if it passes at all. But, say analysts, the message contained in the bill — that indigenous lands are up for grabs — is what matters.

Since Bolsonaro’s election, conflicts between ruralists and indigenous people have soared. The latest report from CIMI, the Indigenous Missionary Council, shows a steady growth in the number of invasions of indigenous areas, up from 111 in 2018 to 160 in 2019; indigenous leaders say Bolsonaro’s speeches and comments have contributed to the increase. Five murders due to indigenous and traditional land conflicts occurred in the first weeks of 2020.

The new bill as written would allow economic projects even in areas where there are known to be uncontacted Indians. The existence of 28 such groups in the Amazon region has been confirmed, out of 115 believed to exist.

But the bill isn’t the only potential threat to uncontacted tribes. The day before Bolsonaro announced his legislation, FUNAI appointed an evangelical preacher and agency outsider to head the Department for Isolated and Recently Contacted Indigenous Peoples (CGIIRC). To accomplish this, FUNAI had to revoke its own long-established rule that only a qualified staff member could be chosen to head such a sensitive bureau.

The new head, Ricardo Lopes Dias, has strong views regarding the conversion of indigenous people to Christianity. He is a former missionary for the controversial New Tribes Mission, a Florida-based evangelical organization, and worked from 1997 to 2007 in the Vale do Javari indigenous reserve, in Amazonas state. There, according to Matsés indigenous leaders — who protested his presence — he “manipulated part of the Matsés population to found a new village” where an evangelical church would be built. The New Tribes Mission has been accused of causing death and disease among the tribes it worked with in the 1970s, subjecting them to enforced conversion to evangelical Christianity. Lopes Dias has a degree in anthropology.

Isolated or uncontacted indigenous peoples are usually survivors of larger groups which were decimated by disease or violence when the military dictatorship (ruling from 1964-1985) forced roads through ancestral lands in the Amazon during the 1960s and 70s. In some cases up to 90% of local populations died. This led FUNAIi, in the 1980s, after the dictatorship ended, to introduce a policy of non-contact, designating a “no go” zone protecting the survivors, who became known as “isolated Indians.”

The choice by the Bolsonaro administration of an evangelical missionary to head the department, according to experts, indicates a shift in this policy, and has been greeted with dismay by indigenous organizations, who regard it as a means of opening up uncontacted tribes under the protection of FUNAI, and putting their cosmological and ethical belief systems at risk from religious fundamentalism.

Well known anthropologist Manuela Cunha said, “the mission of the CGIIRC is to protect these peoples from invasions of loggers, miners, drug traffickers and any others, like missionaries, who do not respect their way of life. To choose a missionary — above all one who has tried to convert indigenous people — to head the CGIIRC is totally contradictory to what the law says.”

However, the choice of Lopes Dias is only the latest example in what seems to be FUNAI’s deliberate policy over the last year of replacing experienced, qualified staff with military officers and evangelical preachers. Twenty of FUNAI’s 39 regional coordinators have been removed under the new administration — almost all were replaced with serving or retired military officers.

Bolsonaro, this week decided to enlarge his “dream” world even further, extending it to fishing. Apparently still smarting from the fine he received in 2012 (and which he never paid) for being caught illegally sport fishing in a protected reserve in Rio. Police Colonel Homero Cerqueira, head of ICMBio, the agency in charge of Brazil’s 334 conservation units, has just authorized “recreational fishing” in all of them, including the most environmentally sensitive preserves.