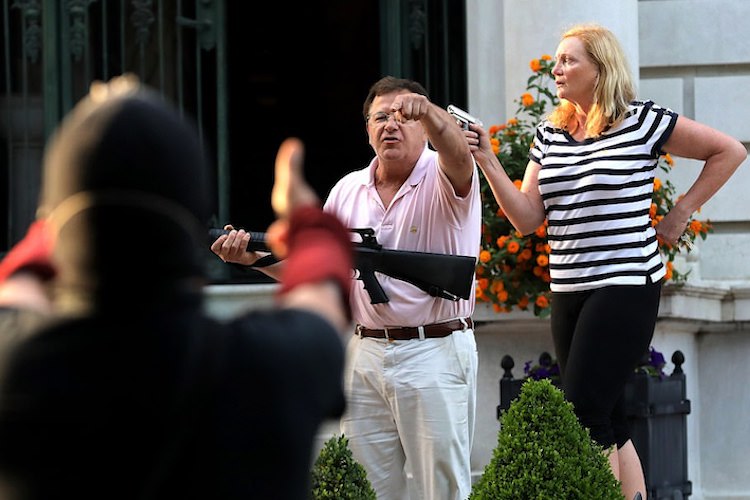 A wealthy couple in St. Louis have become internet famous for brandishing firearms at BLM protestors who invaded the couple’s gated community. Homeowners Mark and Patricia McCloskey are seen in a now viral video wielding an AR-15 and a handgun, nervously pointing them at the mob.

The incident has already inspired tons of insanely hilarious memes, catapulting the couple to instant and eternal internet stardom. The couple has also been DOXXED, threatened, ridiculed for their gun handling skills, and featured on the news.

#kenandkaren with an Oscar worthy performance

Damn, I hate the internet so much sometimes lmao. Ken and Karen #KenandKaren pic.twitter.com/PIazMxA0q7

The political agenda of the mainstream media couldn’t be more obvious right now as America is essentially under siege by an emerging leftist/Marxist insurgency. In order to support this insurgency, legacy media is doing everything it can to promote civil unrest and stoke division.

While it certainly is entertaining to watch the left and the right politicize this event with stunning predictability, make no mistake about it, this is a watershed moment for America.

As this nation becomes increasingly polarized and divided, this incident should make a few things very clear to people.

Firstly, you are on your own when it comes to protecting your life, your family, and your property. We are experiencing a very real collapse of the system, for better or for worse. At the moment, local and state governments are actually permitting social unrest, demonstrating that the government has lost its will to maintain peace and order.

Secondly, fear is spreading like wildfire, and it’s becoming increasingly dangerous. The Revolutionary War began with the ‘shot heard round the world,’ and fear is propelling this society towards some unbelievable event that will catalyze a hot war where Americans begin fighting each other over political ideals.

Thirdly, Americans are way more armed and prepared for self defense than most agitators and political puppets realize.

As fate would have it, we still have the 2nd Amendment, and firearms sales have been skyrocketing in recent months. As Americans watch more and more real-time videos of mob violence, they will notice that those who’ve armed themselves and aren’t afraid to show force aren’t being beaten and having their property destroyed.

The guns are coming out. Those who are not prepared to defend themselves are going to wish they had. Videos like the following confirm this:

Fourthly, the McCloskey incident demonstrates the fundamental principle of civilized societies. That is, violence is power. We live in an exceptionally violent society, although we do a great job of pretending like we don’t. This illusion is crumbling right now. Whatever you may think of these people, what they did was successful in protecting themselves from a violent mob.

Most people don’t see the violence perpetrated by government because it’s so pervasive. Incidents like the George Floyd murder happen all the time with no public attention. The curtain is being pulled back, which is positive, although it opens up a very serious power struggle, which will require applications of ever-greater violence for any one side to gain advantage.

The McCloskey incident is another watershed moment for 2020, so keep your eyes peeled as we move forward. Firearms and self-defense have been demonized in the media for many years now, but we are firmly on the brink of a reality when the hundreds of millions of armed Americans have nothing left to lose and no one there to protect them.

This article (Armed Ken and Karen Trigger America – Four Things You Need to Know) was originally created and published by Waking Times and is published here under a Creative Commons license with attribution to Isaac Davis and WakingTimes.com. It may be re-posted freely with proper attribution, author bio, and this copyright statement.