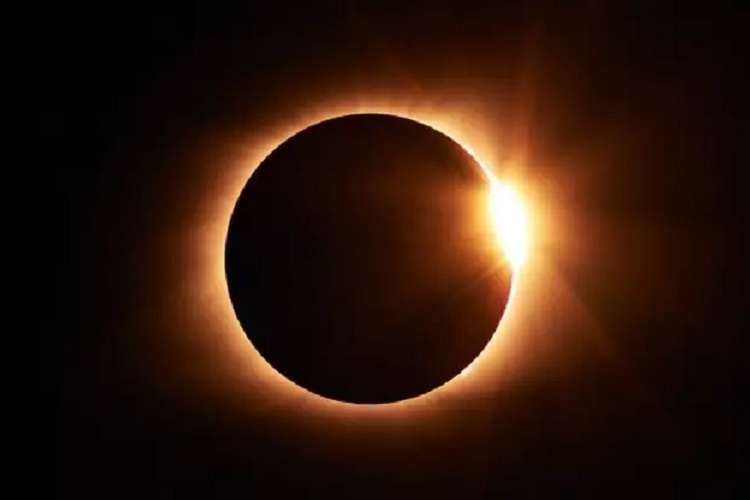 Eclipse fans are in for a major treat this year, with several lunar eclipses and two solar eclipses happening in 2020.

The first of these will be an annular solar eclipse – often referred to as a “Ring of Fire” – that will happen on June 21, right after the Summer Solstice in the Northern Hemisphere.

As its name suggests, the Ring of Fire is easily the most exciting of the different varieties of eclipse. Annular eclipses happen when the moon is farthest from Earth. Because the moon is so distant from our planet, it seems much smaller and doesn’t block the entire view of the sun. Instead, the moon darkens our skies while becoming surrounded by a brilliant bright circle created by the sun.

The path of totality – or the maximum phase of a total eclipse during which the lunar disk covers the sun – will go through Central Africa to the Arabian Peninsula, South Asia, China, Taiwan, and then concluding in the Southwest Pacific, as this nifty map from NASA shows.

9 days left to prep for the solar eclipse😈

Letting that ring of fire BURN what holds me back.😏🔥✌🏾

A partial Eclipse will be visible across most of the African continent, as well as Asia, Southern and Eastern Europe, and Northern Australia.

The eclipse begins at dawn in Eastern Africa (June 21, 03:45 a.m. GMT) with totality kicking off an hour later. The totality will last roughly four hours as the moon’s shadow moves across the earth’s surface, before finally ending in the South Pacific at 08:32:17 GMT.

Of course, while annular eclipses are extremely tempting to look at, it can’t be stressed enough that people should NEVER look at the sun during any type of solar eclipse! While the sun isn’t more damaging to your eyes than on any other day, the fact that the moon offers partial covering will make it far easier to look at the sun.

And because your retinas lack pain fibers and they also can’t heal themselves, looking at an eclipse for any length of time could threaten permanent, irreversible damage to your eyes.

Symptoms of eye damage due to the eclipse do not appear immediately. Visit the doctor immediately if you experience any of the following symptoms . pic.twitter.com/W9k4ej6HER

Instead, you’ll want to use eclipse glasses as you watch the event. Likewise, filters for cameras, binoculars, and telescopes can help you catch a great glimpse of the astronomical phenomenon without suffering irreversibly blurry vision.

However, an Ohio optometrist has warned that watching a solar eclipse is generally a bad idea unless one does it “perfectly.” A few years ago, Dr. Michael Schechter wrote in a viral Facebook post that “there are serious risks associated with viewing a solar eclipse directly, even when using solar filter glasses” – and the warning still holds just as true today.

“For instance, many solar eclipse glasses are made for adults, do not fit children well and should not be used without direct parental supervision,” Schecter wrote. If the solar glasses do not filter out 100% of the harmful UV rays, if they are not used absolutely perfectly, or should there be a manufacturing defect in any of them, this will result in permanent and irreversible vision loss for any eye exposed.

“Just like sunburn to the skin, the effects are not felt or noticed immediately. I have a great fear that I will have patients in my office … who woke up with hazy, blurry vision that I cannot fix,” he added. “One failure, just one, where education and supervision fail, will have such a devastating consequence. Please, please be safe, or watch it on television if you do not have proper protection.”

After this coming annular eclipse, the next one will happen a year from now on June 10, 2021, when people across Ontario, Quebec, Greenland, the North Pole, and Chukotka in Northeastern Russia will have a chance to check out the Ring of Fire. The next total solar eclipse occurs on December 15, 2020, and will be visible throughout South America.