52 Years Ago, a Pandemic Flu Killed 100,000 in the US and Nothing Shut Down—Not Even Woodstock 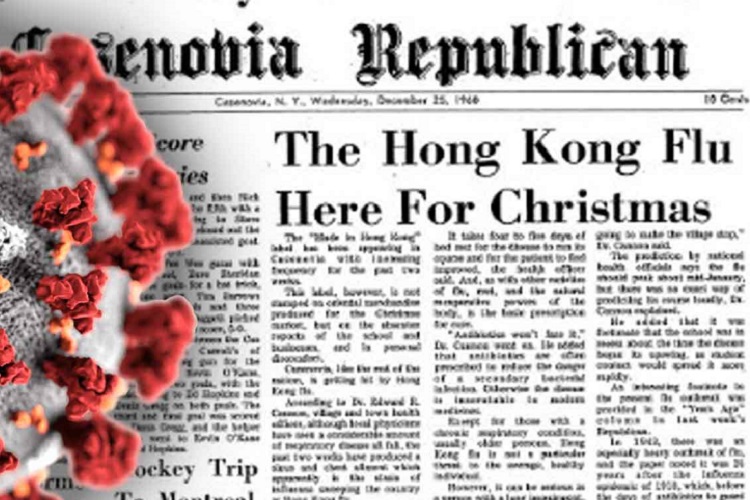 Mainstream media across the planet continue to refer to the COVID-19 outbreak as the worst pandemic since the Spanish flu of 1918. We are told that the economy shut down during the Spanish flu and people were ordered into quarantine, but it couldn’t stop the death toll from reaching 650,000 Americans. Now, the government has made harsh and sweeping regulations, shut down entire sections of the US economy, largely based on a model from the Institute for Health Metrics and Evaluation (IHME), which says roughly 72,000 Americans will die from COVID-19.

No one here is claiming that this virus is not serious and should not be taken serious. However, it is our duty as a free people to question the nature of the government’s reaction, especially when the economic ramifications could be far deadlier than the virus itself — with experts predicting a famine of biblical proportion that could kill millions.

When the virus passes and the suffering continues to persist, a lot of people will be asking the question, “was all of this worth it?”

Rest assured that governments across the world will be patting themselves on the back for their draconian reactions, police state, and mass surveillance programs that nearly all of them rolled out during this pandemic. But we may really never know if the lockdown helped to stop the spread or merely suppressed it.

As mentioned above, the mainstream media has referred to COVID-19 repeatedly as the worst pandemic since the Spanish flu. However, if the models are correct and the death rate stays in decline, this will not be the case. As of Monday, there are 248,000 confirmed deaths world wide, with 67,710 of those deaths in the United States. According to the current rate of new cases and hospitalizations as documented by IHME, experts are predicting a death toll of 72,000.

“In 1968,” says Nathaniel L. Moir in National Interest, “the H3N2 pandemic killed more individuals in the U.S. than the combined total number of American fatalities during both the Vietnam and Korean Wars.”

Just 52, years, ago, however, another flu, (H3N2), known as the Hong Kong flu, killed roughly 100,000 Americans and over 1,000,000 people world wide. What makes this flu particularly notable is the fact that most media outlets are not reporting on it and the fact that absolutely nothing was shut down. In fact, Woodstock — that was attended by an estimated 500,000 people — took place smack dab in the middle of the H3N2 flu pandemic.

As the American Institute for Economic Research points out:

Nothing closed. Schools stayed open. All businesses did too. You could go to the movies. You could go to bars and restaurants. John Fund has a friend who reports having attended a Grateful Dead concert. In fact, people have no memory or awareness that the famous Woodstock concert of August 1969 – planned in January during the worse period of death – actually occurred during a deadly American flu pandemic that only peaked globally six months later. There was no thought given to the virus which, like ours today, was dangerous mainly for a non-concert-going demographic.

Stock markets didn’t crash. Congress passed no legislation. The Federal Reserve did nothing. Not a single governor acted to enforce social distancing, curve flattening (even though hundreds of thousands of people were hospitalized), or banning of crowds. No mothers were arrested for taking their kids to other homes. No surfers were arrested. No daycares were shut even though there were more infant deaths with this virus than the one we are experiencing now. There were no suicides, no unemployment, no drug overdoses.

Media covered the pandemic but it never became a big issue.

This was not because the government was some bastion of liberty in the 60’s. These were the days of the draft, a senseless Vietnam war, rampant civil rights violations, and even college students were gunned down by National Guard troops for protesting the spread of war. The means to enforce such draconian measures were in place and ready to roll, yet nothing was implemented.

The only action taken by the government at the time was to collect data. The medical community, not the state, was credited with successfully mitigating the disease — as they were the ones qualified to do so — not blowhard politicians.

As AIER notes, this raises the question, why was this different? This is a question we will be trying to figure out for decades to come.

Was the difference that we have mass media invading our lives with endless notifications blowing up in our pockets? Was there some change in philosophy such that we now think politics is responsible for all existing aspects of life? Was there a political element here in that the media blew this wildly out of proportion as revenge against Trump and his deplorables? Or did our excessive adoration of predictive modelling get out of control to the point that we let a physicist with ridiculous models frighten the world’s governments into violating the human rights of billions of people?

Maybe all of these were factors. Or maybe there is something darker and nefarious at work, as the conspiracy theorists would have it.

Regardless, they all have some explaining to do.

As more countries across the world continue to look to Sweden’s approach — not shutting down the economy — to quash the spread of the virus, some governments are beginning to follow their lead. In America, however, the 30 million unemployed citizens currently out of work due to the shutdown present a massive hurdle to regaining anything close to normal.