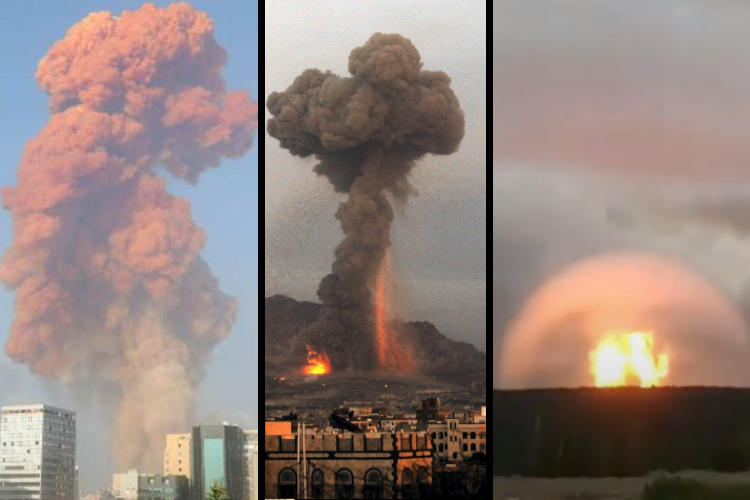 The world has been watching footage of the massive explosion in Beirut’s main city port yesterday, causing widespread speculation as to whether or not this was a covert military operation employing some new generation of tactical small-yield nuclear weapons.

So far, all indications seem to be that this blast was the result of fatal mishandling of hazardous materials, and no faction has stepped up to take responsibility for this as an attack.

The videos are down right terrifying.

The official story is that a fire in a fireworks factory ignited a six year old cache of ammonium nitrate that was improperly stored in the area, causing the massive blast. In this video, you can clearly see fireworks:

Fireworks can be seen clearly in this video https://t.co/Z2DMT0JNbs pic.twitter.com/fXZgMbJ0EV

The blast was utterly devastating, and others are convinced this was a nuclear weapon. We don’t think so, but here are both sides.

Watch the blast in the video. Similar to a tactical nuke… I live 50km away from Beirut and my house shook from the blast wave… Armageddon sceneries within 10 km diameter from the blast. pic.twitter.com/PdSDddZlQ6

While people try to guess what could have really happened, it’s important to remember that small-yield nukes have been developed and are part of the next generation of warfare.  NPR reported in January that new low-yield nukes were already being deployed on American submarines:

“The U.S. has begun deploying a new type of low-yield nuclear warhead aboard some ballistic missile submarines, according to a report by an independent monitor.

When the USS Tennessee, an Ohio-class submarine, went on patrol in the final weeks of 2019, it carried “one or two” of the new weapons, according to a post by the Federation of American Scientists.” [Source]

In January of 2019, The Guardian reported on the Pentagon’s announcement that new warheads were being combat-readied as part of Trump’s ‘nuclear posture review.’

“The National Nuclear Security Administration (NNSA) announced in an email it had started manufacturing the weapon at its Pantex nuclear weapons plant in Texas, as ordered by Donald Trump’s nuclear posture review (NPR) last year…

The new weapon, the W76-2, is a modification of the existing Trident warhead. Stephen Young, a senior Washington representative of the Union of Concerned Scientists, said its yield had most likely been cut by taking away one stage from the original two-stage, W76 thermonuclear device.

“As best we can tell, the only requirement is to replace the existing secondary, or second stage, with a dummy version, which is what they do every time they test fly a missile,” Young said, adding that the amount of tritium, a hydrogen isotope, may also be adjusted. The result would be to reduce its explosive power from 100 kilotons of TNT, to about five – approximately a third of the force of the bomb dropped on Hiroshima. [Source]

To many experts, the explosion in Beirut yesterday does not appear to be a weapon, never-the-less, because low-yield nukes do exist and are deployed, it will only be a matter of time before they are used on someone.

In fact, there are several instances in recent years that many believe are examples of low-yield nukes being used in conflicts in the Middle East in Yemen and Syria.

Footage of these two events is, again, terrifying. The scale and scope of the blasts is utterly incomprehensible, and in neither of these situations has there been an admission by any warring factions of the use of tactical nukes. The official story on these is that both were massive conventional bombs.

It is believed by some that low-yield tactical nukes are being used in the Middle East, although no regime is willing to admit to it. Instead, we are left to speculate, comparing footage of blasts from different situations. We do know that the US, Russia, China, Israel and Saudi Arabia are all nuclear powers, and given the current state of arms proliferation and international sales, who knows what these forces have in their arsenals?

Finally, a look at a Russian detonation in August of 2019 offers a blast that most closely resembles the Beirut explosion, and many believe the Russian example is a low-yield nuclear weapon. The official story on this is that a weapons depot accidentally blew up, similar to the story out of Beirut. The two explosions are quite similar when you look at the initial blast and cloud, the secondary massive blast, and the enormous shockwave that followed.

This article (3 Other Massive Explosions that Left Us Wondering When Tactical Nukes Will Make Their Debut) was originally created and published by Waking Times and is published here under a Creative Commons license with attribution to Vic Bishop and WakingTimes.com. It may be re-posted freely with proper attribution, author bio and internal links.