Teachers ‘Bruised, Bloodied, Traumatized’ After Being Shot By Cops With Pellet Guns In Shooting Drill 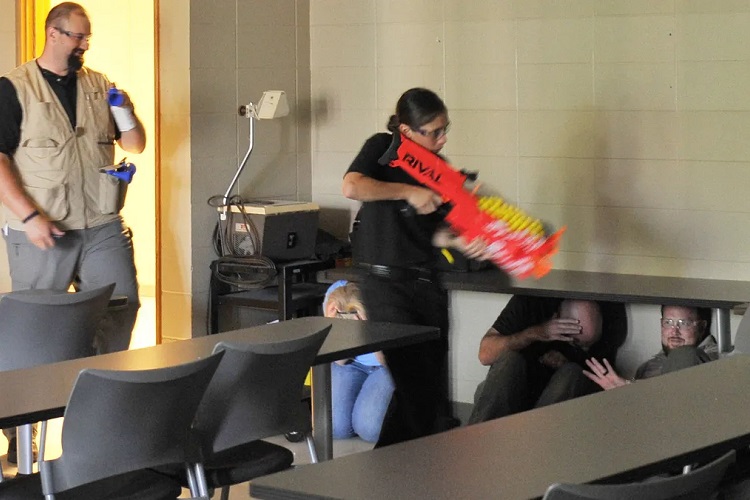 Monticello, IN — In some sick and twisted act, Indiana elementary school teachers were ordered to kneel against a wall before being shot “execution-style” from behind with pellet guns during a safety drill. The teachers were left bruised, bloodied and traumatized after this most insane “drill” and are now taking action.

Last year, some 30 teachers at the Meadowlawn Elementary School in Monticello underwent ALICE training which encourages teachers and students to be proactive when facing an active shooter, including rushing the attacker.

Shooting teachers with plastic pellets does not typically feature in ALICE training, however, and now those teachers are suing. Eight schoolteachers from Meadowlawn Elementary School in Indiana have sued the local sheriff’s department after a traumatizing course of “active shooter” training left them physically and psychologically scarred.

According to the Indy Star, the lawsuit, filed last week in Indiana’s northern federal court, claims that four White County Sheriff’s Deputies subjected teachers “verbal threats, expletives, and screaming,” in addition to being struck with the plastic pellets fired from airsoft guns.

“The teachers displayed obvious signs of anguish and physical pain, but were humiliated to find the law enforcement officers joking and laughing at them,” the complaint reads. “The terrifying and inexplicable experience left the teachers with lasting physical and emotional injuries.”

The experience was so horrific for the teachers that two of them had to stop teaching. A first-grade teacher was also diagnosed with PTSD after the shooting drill.

When the White County Sheriff’s Department was exposed for the horrific treatment of the teachers in the shooting drill last year, Sheriff Bill Brooks said his deputies stopped when the teachers became upset.

“We were made aware that one teacher was upset,” he said in a phone interview last March. “And we ended it.”

But according to the teachers, it had already gone too far. When you are left physically injured by police who are shooting you at point blank range with a pellet gun, while hurling expletives at you in a deliberate attempt to incite fear — all to teach you about mass shootings — something has gone terribly wrong.

According to the Indy Star:

Eight teachers, out of approximately 35 that were present for the Meadowlawn training, have signed on to the lawsuit, each with claims of being left with bruises, welts and abrasions from being shot with the airsoft guns from “point-blank range.”

According to the complaint, the teachers were broken up in small groups and told by sheriff’s deputies to line up facing a wall and kneel. Once they were kneeling, an officer shot the teachers across their backs.

They were told not to tell the other teachers, waiting in another room for their turn, what had happened.

Later in the day, teachers were also subject to a series of drills in which they were instructed at different times to hide in classrooms, to try and barricade doors from potential intruders and to throw tennis balls at the officers. During each drill, officers shot the teachers with the airsoft guns, according to the complaint.

The lawsuit states that each drill started out with a cop “striding quickly down the hallway, loudly banging on walls while screaming furiously, yelling out numerous obscenities and threats, such as… ‘I’m going to kill you all!’”

One of the plaintiffs in the lawsuit, a kindergarten teacher, reports being repeatedly shot with the pellet gun at point blank range as she hid under a table in the fetal position. Exactly what the cops were attempting to prepare her for by doing this remains a mystery.

The injuries suffered by teachers were so significant, according to the lawsuit, that they took days and weeks to heal and a first-grade teacher was left permanently scarred.

Several of the teachers say the experience has left them fearing law enforcement and report constant anxiety while at work while others have sought psychiatric help.

School shootings are an unfortunate reality in America but drills like this one seem to be counterproductive to preventing or acting during them. Attempting to train teachers like military personnel by subjecting them to such violent and traumatizing experiences is not the answer to the problem of mass shootings. It is, however, a great way for sadistic cops to inflict pain and suffering on innocent people for personal joy.