SILENCED: We Live in a Time When Our “Opinions Qualify as Crimes” 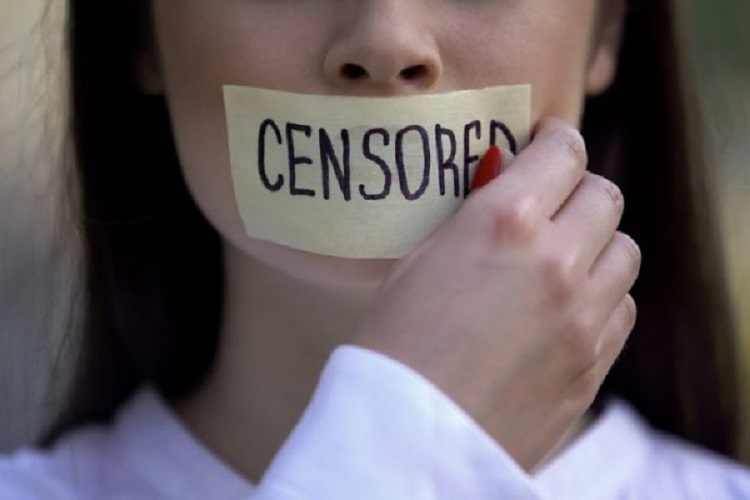 Currently, we’re living in an upside-down and backward world where the minority of people hold all the microphones, successfully shouting over a potential majority of people who don’t like the way things are going.

I truly believe that most Americans don’t hate their neighbors, don’t indulge in cruelty for the sake of cruelty, don’t indulge in cruel behavior toward those of other races than their own, and just want to live their lives with what happiness they can find. This is not to say that racism does not exist – it does and I’ve seen it in action. It also isn’t to say that there aren’t extremists who wallow in hatred – there are and on all fringes of the political spectrum.

The trouble happens when one of those fringes tries to silence everybody else. And it’s working.

How big independent sites are being silenced

Take the recent threats against ten websites in the United States, all of whom a new website in the UK is trying to get “defunded.”

We call on brands advertising on Fake News sites to stop funding Fake News.  To be honest, I was very hesitant to write this article, because I, too, am dependent on ad platforms that go through Google. But too many people are silent while others are silenced so here goes.

Stop Funding Fake News was set up in 2019 by people who were concerned about the rapid rise in Fake News.

​Since we launched, we’ve seen one of our target fake news sites completely shut down, and the capacity of several others reduce significantly as a result of us damaging their ability to raise revenue.

​We are pro-truth, pro-balance and pro-responsible news. We invite brands and people to consider whether they want their adverts to appear next to hate and untruths. (source)

Here’s a list of the sites that SFFN considers “racist.” Whether they are or not isn’t the purview of this article.

You’ll note a common thread on the list of articles that SFFN deems offensive. It seems that only one point of view, as opposed to the balance they say they’re looking for, is acceptable in the eyes of SFFN and anything else must be piled on the pyre of all the virtual books being burned.

Zero Hedge, probably the most popular and powerful alternative news site out there, was completely defunded by Google. Here’s what Zero Hedge had to say about the issue.

You see, the way it works is this. Ad networks bid on advertisements and based on statistics available through Google, these ads are placed on websites that contract with the ad networks. This is how my site and many other high-volume websites get the bulk of their advertising revenue. Keep in mind it’s pretty expensive to run a smaller site like mine, so I can only imagine the cost of running a far bigger site.

Advertisers are getting on board because their livelihoods, too, rely on being seen as holding the “correct” opinion. We’re all under mob rule.

The Federalist, another site on that list, was able to keep their site funded but only if they removed their comments section entirely. So not only do they have to change their reporting, but they also have to silence their readers. You may be thinking that it sounds like they caved – but you cannot run a large website without revenue unless you’re independently wealthy and you don’t mind just throwing money down a well never to be seen again. Most site owners are not in that position.

It’s a nerve-wracking time to be in this business. I debated for several days whether or not to write this article because my head could be on the chopping block next. My livelihood and that of the people who work with me are at risk.

But if we of the independent media don’t speak up, who will?

How can we do nothing while the entire conversation is being taken over by radical elements with which many Americans do not agree? The independent media is the last remaining bastion of alternative opinions. George Orwell wrote these chillingly prophetic words in his novel 1984.

“Every record has been destroyed or falsified, every book rewritten, every picture has been repainted, every statue and street building has been renamed, every date has been altered. And the process is continuing day by day and minute by minute. History has stopped. Nothing exists except an endless present in which the Party is always right.” (source)

Americans can only hold one opinion now.

Americans continue to be silenced or to be bullied out of their jobs based on who they voted for, forced to affiliate with groups that they may not actually support, or fall victim to a virtual mob during an internet witch hunt.

All because they dare, in America, alleged land of the free, to disagree with an opinion that is treated as fact.

You may recall after President Trump was elected how horribly anyone who voted for him was treated. Heaven forbid a person was to wear a red MAGA hat in public because to do so was risking a beating. Americans were suddenly cast into a world so extreme that our opinions could mean the difference between life and death in the workplace and on the streets.

If you don’t support groups like Antifa or the Occupy movement, you’re considered a “far-right extremist.” That’s the moniker used to describe Zero Hedge in most of the news coverage about their defunding.

For the record, I’m not even sort of “right” and I’m definitely not “far-right.” I don’t support or endorse either major political party or any extremist groups. I weigh my opinions based on my personal ethics. Some of them may fall in line with the left, some may fall in line with the right, but I do not align myself with any groups. My opinions are entirely my own.

Freedom of speech is one of our most sacred rights in this country.

That includes the freedom for those with differing opinions to speak, have platforms, and hold some of the microphones. Silencing these websites through insidiously getting them defunded is anti-American.

I think CNN, for example, has been proven to be exceptionally biased time and time again, even going so far as to try and swing the last election for Hillary Clinton. It’s an undisputed fact that one of their employees colluded with her before the presidential debate.

Regardless of that, I don’t think they should be defunded. I think that they should be able to continue to operate and so should their opposition. That’s how you have a balance in the media.

Here’s what Tucker Carlson had to say about the silencing of Americans.

A few days ago, Tucker Carlson of Fox News tackled this topic. And yes, Fox News, just like every other network, has a bias. We must all face the reality that days of unbiased journalism are over and every piece is an opinion piece. And even that wouldn’t be so bad if we were presented with the full range of opinions.

Did you catch the line that “our opinions qualify as crimes?”

And he’s also right when he talks about how our information is being controlled. It doesn’t matter if you personally use Google or not. What does matter is this:

That’s a whole lot of people who are getting their opinions from one company. That’s a whole lot of power. And that power is being misused to silence opposing points of view and to make it seem like nearly all Americans support their point of view. In fact, this is untrue. But the media and the internet have taken control of reality and they’re presenting us with a reality of their own ideals.

We are at an incredibly dangerous turning point right now and everything we hold dear about America is at risk.

If you’re looking ahead and the future looks bright, that might be because you’re seeing the country on fire.