Hummingbirds Can See Totally Different Colors Outside The Human Spectrum 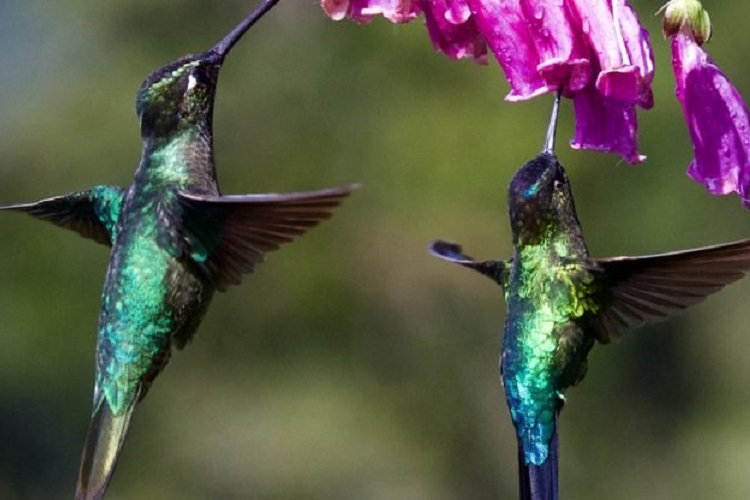 Scientists have known for a while that various animals perceive parts of the light and color spectrum differently and that this affects how different animals perceive color. A new study on broad-tailed hummingbirds has come to a surprising conclusion.

According to researchers, these birds can see a great deal of color that is outside the human spectrum.

Humans are so used to the rainbow spectrum that it is hard for us to even comprehend that there are different colors that we simply can’t perceive. This new study suggests that a full third of the vision of broad-tailed hummingbirds – Selasphorus platycercus – exist outside human spectrum.

The results, published in the journal Proceedings of the National Academy of Sciences, describe an experiment designed to test whether the birds can tell the difference between spectral colors and a hybrid of UV and spectral colors.

Using a sugar solution as a reward, researchers studied whether non-spectral colors seemed of critical interest to the birds.

Humans, who have 3 cones affecting their visual perception of color, can not see UV light. Birds, on the other hand, have 4 cones, which augments their color perception and also allows them to see UV light.

The experiment was able to test the degree to which birds are able to perceive color information in non-spectral light when viewing plants and bird plumage.

The study concluded that broad-tailed hummingbirds are experiencing a significantly different and enhanced universe of color combinations. Scientists believe this may have developed as an evolutionary mechanism to assist with foraging, mating, and evading predators.

Birds are certainly not the only species with wildly different color perception. Bees cannot see red, only yellow, green, and blue–but, they can see light on the ultraviolet spectrum. Butterflies are known to have at least 15 different types of photoreceptors, allowing them a vastly multiplied color palette.

The mantis shrimp, donning a 400-million-year-old optical apparatus, has 12 different color receptors but, counterintuitively, is likely not seeing a whole other rainbow of color.

The new study on hummingbirds posits that fully one-third of the hummingbird’s vision may be attuned to colors humans can’t see.