Movement To Defund the Police is Gaining ‘Unprecedented’ Support Nationwide 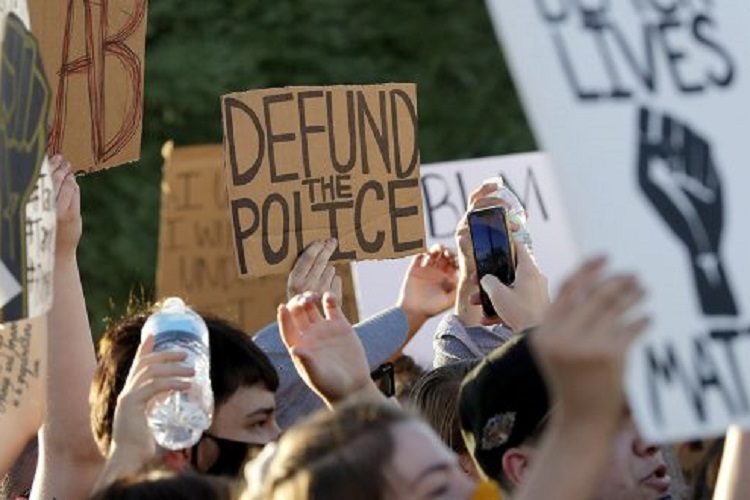 This article was originally published by Eoin Higgins for Common Dreams

As law enforcement officers across the country continue to brutalize peaceful demonstrators in the nationwide protests sparked by the killing of George Floyd in Minneapolis last week, support for defunding the police is rising as Americans become increasingly fed up with the institution’s racism and violence.

“In moments of crisis, people want services and resources that go directly to help people rather than police that surveil, brutalize, and kill us,” Black Lives Matter LA co-founder Melina Abdullah told the Guardian.

The murder of Floyd by four Minneapolis police officers on May 25 served as the catalyst for the uprising that has filled city streets around the nation with unprecedented numbers of protesters.

As Common Dreams reported Wednesday, polling this week shows a majority of Americans believe both the anger and the actions of the protesters are at least partially justified—including the burning of the Minneapolis Police Department Third Precinct building last week.

Activists have long called for defunding the police as part of the solution to the institution’s myriad problems. Long seen as a fringe position by more mainstream liberals and conservatives, the call to defund is now seeing widespread support among the public and politicians alike.

Some folks are genuinely trying to understand what we mean when we say “Defund Police”. Examples below 👇🏼👇🏼👇🏼👇🏼 https://t.co/0ryDrHximN

“We need to defund the police and make sure that money goes back into the communities that need it,” said Cori Bush, a progressive candidate running for Missouri’s 1st District House seat, in a statement.

“We have to end the militarization of police, stop the racial profiling,” Bush added. “Throwing money at the problem will not solve it.”

According to Rolling Stone:

As the protests continue around the country, activists in New York, where the police department’s budget is poised to swell to nearly $6 billion in 2021, and Los Angeles, where LAPD’s funding was increased this year to $1.8 billion, are mounting their own defunding campaigns. The first step for anyone interested in pushing for a re-thinking of their city’s priorities is to get involved in the budgeting process by attending city council meetings and speaking. The Leadership Conference on Civil and Human rights had a toolkit, praised earlier this week by former President Barack Obama, with more resources and information on how to get involved.

The increasing support comes as images and videos of police attacking peaceful protesters and innocent bystanders continue to spread across social media as demonstrations entered their tenth consecutive day Thursday.

You pay the NYPD $6 billion a year for this. Defund the police.https://t.co/IiWRYFk2W8 https://t.co/0Qcdu4wWMr

People stuck in traffic are witnessing NYPD beat up folks on their way home. pic.twitter.com/AkUGPQQOIf

The Working Families Party, in response to the ongoing brutality, issued a statement saying the group would not support any candidate who would not commit to defunding the NYPD.

This is huge. @NYWFP’s Director is saying if you’re not fighting with us to defund the NYPD as a candidate who wants support, you’re a ghost to us. https://t.co/cRkWcmKwgq

Alex Vitale, writer of the book “The End of Policing,” said in an interview with The Nation Thursday that he believes the funding for police departments should instead be put toward community service jobs.

“The police department and the corrections department are always hiring and community centers aren’t,” said Vitale. “And when they do hire, it’s at half the salary and half the benefits. So this budget battle is about getting cities to reprioritize how they deal with the very real needs of the most disadvantaged communities that are subjected to the most intensive policing.”

The speed with which public opinion has turned on the issue didn’t surprise Tony Williams, a member of Minneapolis-based abolitionist group MPD150, who noted the increasing nationwide anger over the high number of police killings of unarmed black men since 2015.

“This is unprecedented in our movement,” Williams told the Guardian, “but it is a natural consequence of where we’ve been over the last five years.”