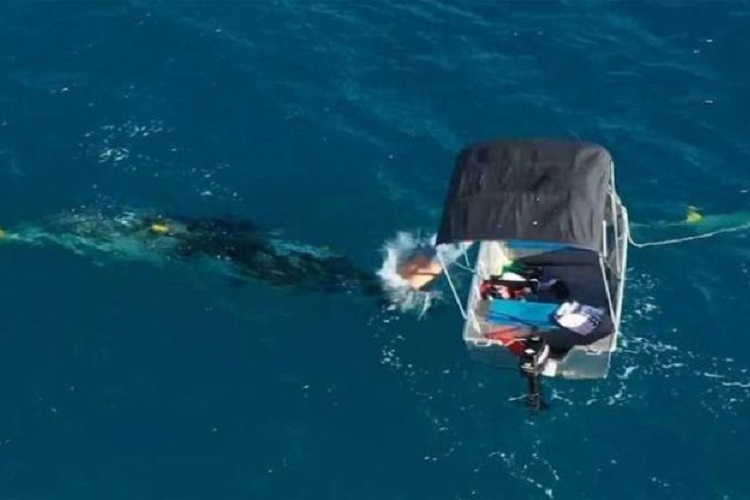 In a world where we’re told to be concerned about the environment and be mindful of the impact of our actions on wildlife, one would expect that saving an animal would hardly be a cause for punishment.

But for one Australian man who decided to do the right thing and save a whale that was caught in shark nets off the Gold Coast, he learned instead that the government frowns on individuals who act on their own initiative to rescue a helpless animal.

The man, who goes by the name of “Django,” is a recreational diver who was out free-diving on Tuesday morning before he saw the young humpback whale struggling in sea nets.

Local officials had received phone calls notifying them that a whale was in crisis. However, hours passed without authorities lifting a finger to take action,

Eventually, the diver’s “adrenaline just sort of kicked in” and he took his boat to the scene to rescue the creature, he told the ABC. The man said:

“Basically I just tried to untangle him. I had a knife, I didn’t really need to use the knife though. He just had his pectoral fin sort of wrapped up and he was about eight to nine meters deep.”

In the meantime, a crowd of spectators watched as he rescued the ocean mammal.

According to the BBC, spectator confirmed that hours had passed since authorities were notified before the man took action. He added:

“Luckily a good Samaritan came up and did fisheries’ [officials] jobs for them.”

When the whale was finally freed, Django returned to the shore. As he was about to leave the area, however, officials caught up with him and fined him, he told local media.

A Gold Coast man who freed a whale from shark nets earlier today could be fined for his trouble.He said he couldn't wait for authorities to arrive, and acted on impulse – untangling the baby humpback from the netting 🐋📹: Envoy Cull | More: https://ab.co/2z0Cajq

Django hasn’t explained how much the fine levied by fisheries inspectors was.

It also remains unclear what exactly his offense was, but Queensland state does have penalties meant to dissuade people from tampering with government property, or moving too close to whales. However, the fee has convinced the man that his selfless act of rescuing the whale may not have been worth the cost.

“Yeah, I’m trouble, it was fair enough. I just saw it and thought, ‘What are you going to do?’ It was an expensive day, but whatever.”

State officials dispute Django’s claim that he had been fined. Queensland Fisheries Minister Mark Furner explained that while there is currently an investigation into the matter to determine whether a fine is justified, locals should still leave certain matters to the authorities.

“It is important that people allow the professionals to do their jobs in circumstances like this,” the minister said.

The use of shark nets around Australian beaches has come under criticism from conservationists due to their negative impact on coastal wildlife.

Just last year, five whales were found caught in the nets, leading to demands by advocates that other forms of shark deterrent be deployed in their place. The state government has committed $1 million to investigating alternatives to the nets.

In the meantime, however, people who tamper with council equipment such as shark nets face fines of up to $26,690.

Django, who professes to be a lifelong diver, described the nets as “a waste of time” because “sharks just swim around them.”