Beachgoers Left Behind 13,000 Pounds of Trash at Florida Beach This Past Weekend 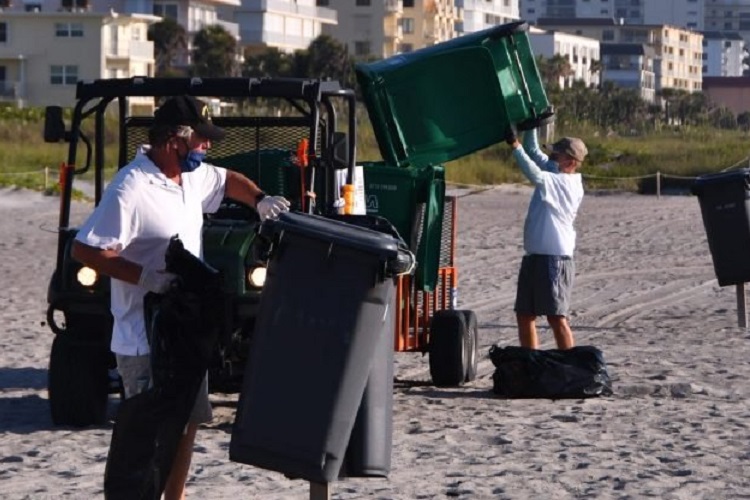 With much of the world being plunged into lockdown conditions, nature has been given a much-needed breather in a manner unprecedented in the modern age. And on coastlines all over the globe, the results have been nothing short of miraculous – with sea turtles, whales and other creatures enjoying the benefits of human-free beaches and shorelines.

However, as states across the U.S. start to relax quarantine measures, it appears that we humans are just as uninterested as ever in respecting the planet – and nowhere has this been more clear than in Florida, where beachgoers left an estimated 13,000 pounds of trash strewn across one beach this past weekend, according to The Hill.

Cocoa Beach is a city known for its gorgeous maritime forests and its international surfing competition.

Florida’s beaches, which reopened on April 21, have also been the center of the state’s efforts to revive the state’s floundering tourism industry. However, the massive influx of visitors – said to be equivalent to the number of people who flood the beaches on holidays like the Fourth of July – has led to a huge spike in garbage being carelessly left behind

This has forced authorities to launch a new crack down on litterbugs.

“As restrictions are becoming more relaxed during this pandemic, the City of Cocoa Beach is beginning to see an influx of day-trippers to our beaches, along with piles of unlawfully discarded trash in their wake,” Cocoa Beach Police Department wrote in a statement, adding: “This will not be tolerated.”

The police also stated that they will start “focusing on litter violations in the days and weeks ahead in an effort to educate the public and mitigate this repulsive and disrespectful behavior.”

The massive amounts of litter found on the beach this past weekend come after roughly 6 tons of trash were collected in the prior weekend. Two weekends prior, the same amount – 297 bags of trash weighing about 40 pounds each – were also collected.

According to Bryan Bobbitt, the executive director of local NGO Keep Brevard Beautiful, the actual amount of trash has been higher due to trash collectors not picking up larger items like discarded beach chairs and tent poles.

To make matters worse, most of the discarded garbage has consisted of single-use plastics that have a devastating effect on marine life. Bobbitt told CNN:

“People will come from out of town and leave an umbrella, a tent or chairs because it’s a onetime use. Chip bags, plastic straw wrappers and anything can get blown into the dunes.”

Bobbitt’s group has struggled over the years to ensure that the local environment is safe not only for humans, but for animals as well. He added:

“When we see something that can be a choking hazard to marine life, we make it a point to get that stuff as well. If we don’t pick it up, it gets blown into the water. We’ve all seen the photo of the straw stuck in a sea turtle’s nose or a 6-pack ring around a bird’s neck.”

In a statement, Cocoa Beach Police Chief Scott Rosenfeld said that the local community has exercised its responsibility and worked “very hard to be stewards of environmental sustainability.”

“If I need to relocate critical resources during our peak season to combat litterers, we are no longer asking our visitors to comply with our litter laws, we expect it, and there will be consequences for offenders.”

However, police only managed to issue a single littering citation during the past weekend. According to Cocoa Beach Detective Sgt. Thomas Cooper, it’s nearly impossible for police to ascertain who is leaving what trash behind. Cooper told CNN:

“You have to say they’re the person who legally left that trash. The officers are stuck.”