Someone Snitched on a Food Pantry Helping Needy During Pandemic, So Gov’t Shut It Down 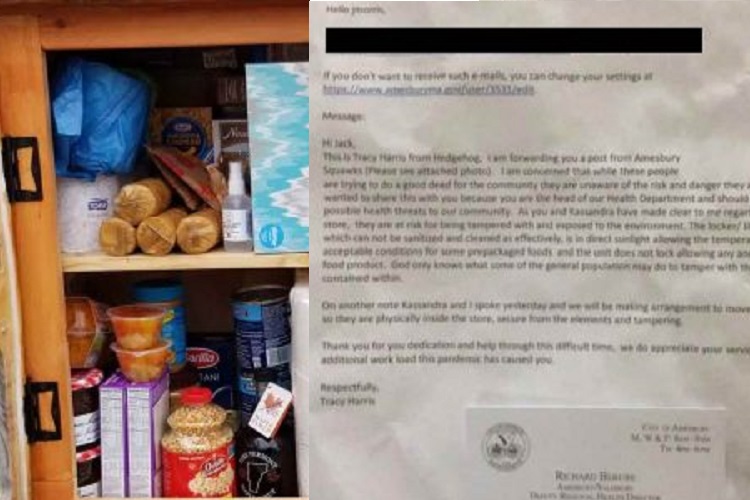 Amesbury, MA — There have been few things more divisive in recent American history than the current pandemic which we have been watching unfold over the past two months. While politics should play absolutely no role in a pandemic, it’s become the polarizing central issue currently tearing America in half. It is also turning countless Americans into tattletales who rat out their neighbors for not standing six feet apart, or, as the following infuriating case illustrates, helping those in need.

Last week, Tracey Brown, of Amesbury, wanted to do something good for her community in their time of need. So, she converted her front yard free library box — that let people check out books for free — into a mini-food pantry.

The pantry was on her private property, contained non-perishable goods, and even had wipes outside so anyone who used it could wipe it down with they were done. Brown stocked the pantry with dry goods, toilet paper, hand sanitizer and other items and took to Facebook to promote it. Needless to say, it was very well received. In her post, Brown described her endeavor as something she wanted to do to give back during the COVID-19 pandemic:

Our little Amesbury Pantry is stocked with some awesome things…please help spread the word so people who need things can come by and help themselves. Thank you to everyone who has contributed!

As I was going about my morning…I started to think “What is my Coronavirus Story?” We all have one. We are living in very stressful times these days…most of us are likely dealing with anxiety and uncertainty. Either you or someone you know has lost their job, their ability to earn a living, is ill with this virus or passed away. We are all struggling in our own way. There is so much information being shared…determining fact from fiction can be daunting. One thing I thought about today was my story…how I am navigating this time? Part of me wishes I could wave my fairy wand and make the world a better place, but I know that’s not realistic. Like most of you, I have my own opinions about things…but I thought it was more important to think about how I wanted to look back on this time. Do I want to reflect back and think about a disagreement I had with someone, about the doom and gloom of it all or would I like to think that in some small way I tried to make a difference by helping. I know our little food pantry cannot cure all the ills of the world, but it is my hope that it helps the people in my community…and this is something I want my “Coronavirus Story” to be about.

Wishing you all peace in strength.

Brown’s idea quickly began to go viral, with other folks wanting to mimic her or donate supplies. Those in need were about to have a source of sustenance in their community without costing the taxpayer a cent and it was going to be amazing — that is until some tattletale neighbor ratted out Brown for helping folks.

A “concerned citizen” otherwise known as a government snitch, called the Health Department and complained, telling officials that this voluntary food pantry that served non-perishable goods, was a threat to the health of the community.

Instead of telling the snitch that she had no place attempting to stop good people from safely helping others by giving them food and supplies, the Health Department carried out the wishes of the snitch. Two days after launching her inspiring venture, Brown received notice from Amesbury Health Agent Jack Morris, instructing her that she must close down the food pantry.

We tried…I would like to thank everyone who contributed to our little pantry…in our effort to help during these challenging times. It was wonderful to see the positive response to this project. Our hearts and intentions were in the right place. The concerned woman who owns Hedgehog felt that we were putting people at risk so she reached out to our Board of Health…and as of today…our little pantry has been closed down.

According to Morris, a cooler placed in front of the pantry is what drove his decision to force the good Samaritan to shut it down. He said the cooler created a “food security issue,” according to Newburyport News. But that’s likely because he never bothered to ask what was inside it.

According to Brown, the cooler did not contain perishables, but instead had toilet paper, hand sanitizer and crackers.

When COVID-19 hysteria has neighbors ratting each other out over their good deeds, it is high time to start some self-reflection. It is one thing to report your neighbor for domestic violence or theft, but calling the authorities because a food pantry makes you feel unsafe is as asinine as it is indicative of the state’s control over their dependents’ minds.

Encouraging citizens to snitch on each other is a move out of every fascist government’s playbook throughout history. While it is a different degree, it is no different in kind than Germans reporting Jews to the Nazi regime or Turks reporting Armenians to the Ottoman Empire during that holocaust.

Luckily, many folks who have come across Brown’s post about her closure do not support the government’s decision nor the snitch. Many folks have taken to Brown’s post to express their concern over such a ridiculous and outright tyrannical decision. Below are some of those comments:

Unbelievable! Nosey neighbor. This was nothing more than people helping people. Its not like it was open food. It was all sealed merchandise. Your hearts were all in the right place.

That’s just sad. What harm could this possibly be doing? No different than going to the store

I agree, bs. No different than shopping at the grocery store or getting a food delivery. I am stunned that the Board of Health buckled under the ill-informed, nosy neighbor.

Ok to starve to death,but not ok to get sick,wtf!

The Free Thought Project would like to encourage all of Brown’s neighbors and anyone else who has a little extra to spare, to set these food pantries up in their front yards in an act of civil disobedience. If government escalates force to stop communities from helping each other out, you know that government has no interest whatsoever in your well being and they should be thrown out of office immediately.