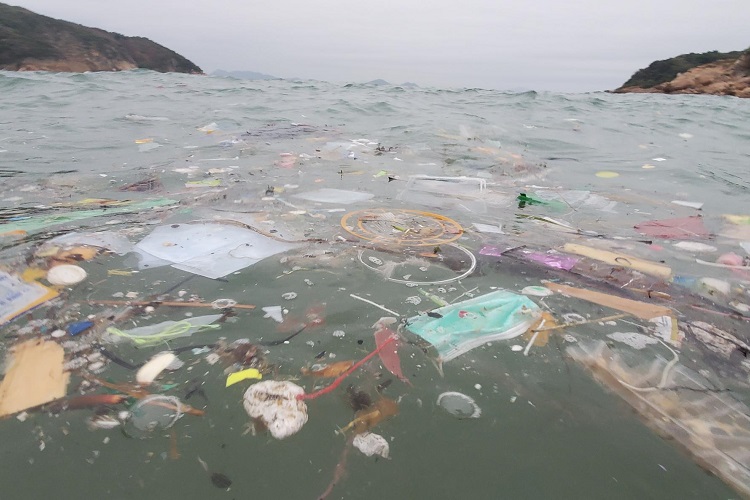 Masks have now become either mandatory or strongly recommended across much of the world, in hopes of stopping the spread of the coronavirus. While recommendations have been controversial in some areas due to low supplies, masks have been shown to work, but unfortunately, these new accessories have given people a new item to litter.

Sadly No Shortage of Surgical Masks On Hong Kong Beaches OceansAsia are currently 5 months into a year long study of #marinedebris and #microplastics. Our research site is located on the Soko Islands, a small group of islands located south west of Lantau at the mouth of the Pearl River delta and one of the focuses is investigating the make up of the debris, where it comes from etc. On this months survey trip the team noticed a new arrival to the beach, the surgical mask. Besides the obvious disgust in hygiene mentality the interesting part for us is seeing the timing. With such a massive social change (everyone wearing masks) it has taken 6 weeks to see the effects wash up on our beaches. Surgical masks would possibly have been there before the COVID-19 virus in very small numbers, but no way on the scale we witnessed. We have been on this beach twice a month for 5 months. In Hong Kong we have already seen our nature trails getting trashed by masks, however to now know that something introduced enmasse to a population, takes just 6 weeks to arrive on our beaches. This highlights we have a serious waste management system, both in Hong Kong & China. Photo: Naomi Brennan *Gloves were worn at all times and collected masks were disposed of correctly. #covid19 #virus #cdc

In addition to cigarette butts, empty bottles and discarded food wrappers, rubber gloves and surgical masks are now littering many city streets as well. Discarded items on the street can very easily get washed down drains during storms, and eventually, end up in the ocean or other waterways. Surgical masks and gloves can be especially damaging to the environment because they are often made out of fabrics and plastics that are not biodegradable and come in colors that are attractive to marine animals.

In Asia, where people have already been widely using masks and gloves for a few months now, conservation groups have reported that these items are already making their way into the nearby waterways and oceans. In February, the conservation group OceanAsia posted photos that they took of the beaches in Hong Kong, where gloves and surgical masks were scattered all over the sand, and floating in the water.

OceanAsia co-founder Gary Stokes told The Independent that he expects these items to be found inside of dead marine animals in the near future.

“The way I see these masks in the environment is just another addition to the ever-growing marine debris crisis our oceans are facing. No better, no worse, just shouldn’t be there in the first place. I’m waiting to hear of the first necropsy that finds masks inside a dead marine animal. It’s not a question of if, but when,” Stokes said.

Environmentalists in the United States have been noticing a similar trend, as the use of masks and gloves continues to be more common in the country. Maria Algarra, the founder of the Miami-based environmentalist group “Clean This Beach Up,” has started a hashtag campaign called #TheGloveChallenge, where she has encouraged people to take photos of discarded gloves and masks to illustrate how much of a widespread problem this littering is.

Hello everyone! We hope everyone is staying safe and healthy! 🙏🏼 A week ago along with our friends from @eco.codes we decided to start #TheGloveChallenge 🧤 not only to track littered gloves but also as a way of creating awareness and educating others! 🚯 #stoplittering • As of today we have tracked a total of 490 pairs of gloves from pictures sent by amazing people like YOU! 🆘 (Remember if you’re going to pick them up protect yourself, use a picker or protective gloves.) • Join the challenge! If you see a glove snap a shot 📸 tag us on your stories or posts!! And help us spread the word! THIS IS NOT OKAY!! 👀 • For many “they are just gloves” for our wildlife they look like food! #savetheturtles 🐢 use latex gloves only if you have to and dispose of them correctly 🙏🏼 . . . . . . . . . . . . . . . . . . . . . . . #theglovechallenge #themaskchallenge #cleanthisbeachup #cleanthisbeachupmiami #coronavid19 #covid19 #pandemic2020 #beachfinds #cleanwaterforall #beachcleanup #cleanbeaches #latexgloves #stoplittering #plastickills #plasticpollution #breakfreefromplastic #planetorplastic #weareallinthistogether #quarantined #stayhomechallenge #dontpanic #saveouroceans #getwasted #climatechange #dontbelazy #trashcan

Algarra says that she has received nearly 2,000 photos of discarded gloves and masks from all over the world. In some cases, people have even pitched in and helped to clear up the discarded items, but Algarra has advised her supporters to only pick up the items if they have personal protective equipment.

“With the glove challenge, it’s about education. That’s the key for us to do better as a community and as humans. We can’t expect people to change their ways if they don’t know what they’re doing wrong. Plastic breaks down into smaller and smaller pieces until micro-plastic is everywhere. It’s toxic and it’s in what we’re eating and drinking. There’s no way to clean up micro-plastics. Once trash makes it into the ocean and breaks into smaller pieces, it’s almost impossible to take it back,” Algarra said.