Save the Insects, Save Ourselves: Researchers Sound Alarm on Bugpocalypse

Global conservation scientists drew renewed attention to the “insect apocalypse” underway with two companion papers published Sunday underscoring how the fate of human beings and that of insects is intertwined.

Building on the warning to humanity issued in 2017 by over 15,000 scientists—itself an updated warning from 25 years prior from the Union of Concerned Scientists—the researchers outlined what’s driving the insect extinctions.

The root of the problem is clear, said the researchers: “human activity is responsible for almost all current insect population declines and extinctions.”

Those activities take on various forms and can act “synergistically.” They include habitat loss, degradation, and fragmentation; pollution from sources including pesticides, fertilizers, and noise; invasive alien species; the climate crisis; overexploitation that can happen from activities including harvesting insects as pets or food sources; and co-extinction that threatens insects that are co-dependent on vertebrates facing extinction. 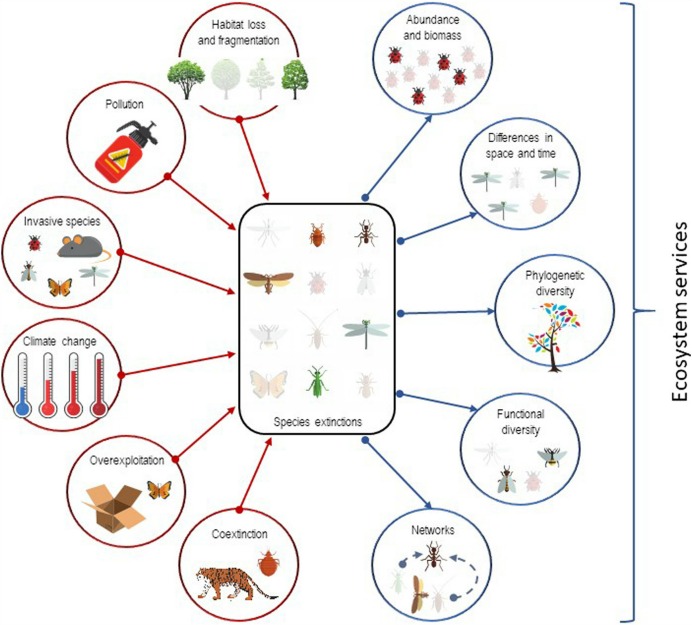 At risk with these losses is not just the insects’ “innate value”—though that should not be discounted, said the researchers. Much more is at stake. From the paper:

Each species contributes a unique piece to a complex living tapestry that changes in space and time. Each species represents an unrepeatable part of the history of life. In turn, each species also interacts with others and their environment in distinctive ways, weaving a complex network that sustains other species, including us.

Indeed, human reliance on these creatures is immense given the roles they have in seed dispersal, pollination, and soil formation, as well as other roles with a clear monetary value including nature tourism and medical treatments.

And yet, noted the scientists, “there is little knowledge on the functional roles that insects play in many ecosystems, with their values likely greatly underestimated.”

“It is surprising how little we know about biodiversity at a global level, when only about 10 to 20 percent of insect and other invertebrate species have been described and named. And of those with a name, we know little more than a brief morphological description, maybe a part of the genetic code and a single site where it was seen some time ago,” noted co-author Pedro Cardoso from the Finnish Museum of Natural History Luomus, University of Helsinki, Finland.

“Conservation efforts have largely been focused on charismatic megafauna, especially birds and mammals, with little thought on ecosystem connectivity,” the researchers wrote. But “knowledge gaps can be mitigated,” they added, and in fact must be “to conserve insect diversity for our own survival.” 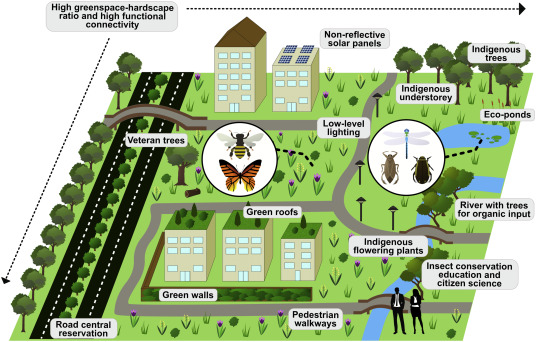 Essential components for urban insect conservation. (From “Solutions for humanity on how to conserve insects”)

According to the researchers, the “current extinction crisis is deeply worrisome,” and the time for action is now.

“Many solutions are now available to support insect populations at sustainable levels, especially through preserving and recovering natural habitats, eliminating deleterious agricultural practices including harmful pesticides, implementing measures for avoiding or eliminating the negative impacts of invasive species, taking aggressive steps to reduce greenhouse gas emissions, and curbing the deleterious effects of overexploitation of many taxa,” the researchers added.

The second paper focused on those possible solutions.

Conservation of freshwater systems must take place as well, which can be achieved by boosting natural vegetation and heterogeneity. Another change is to shift away from conventional agricultural practices to agro-ecological approaches that include wildflower strips and integrated pest management.

Major obstacles remain, noted the researchers, who pointed to global fragmentation of landscapes—a problem worsened by the climate crisis—as well as “the current lack of sufficient collective political will and concerted effort, as with climate change mitigation.”

An essential part of the strategy must be to convey the message to the public that insect conservation is key to our own future survival.